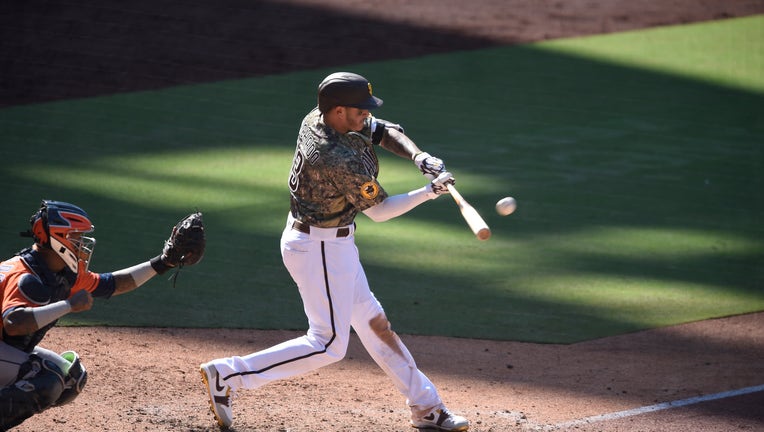 SAN DIEGO - Fernando Tatis Jr. made two spectacular plays at shortstop, Manny Machado hit a two-run home run in the eighth inning and the San Diego Padres got a lockdown performance from their bullpen to beat the Houston Astros 5-3 Sunday for a three-game sweep.

The Padres, who got to nemesis Zack Greinke in the fourth inning, have won seven straight, all against the two Texas teams. The Astros have lost three straight. They came in on an eight-game winning streak.

Tatis retreated into left field and jumped to rob George Springer of a hit for the second out of the eighth inning. Springer couldn't believe it, and reliever Craig Stammen (3-1) clapped for the 21-year-old star.

Tatis then led off the eighth with a single to shallow right-center off rookie Enoli Paredes (1-1), and Machado followed with a shot to right-center, his eighth.

The Padres weren't able to add on to their "Slam Diego" power display of the past week. On Saturday night, they became the first team in big league history to hit five grand slams in six games. They were also the first to hit a grand slam in four straight games, a streak started by Tatis on Monday night at Texas and continued by Machado with a walkoff grand slam Wednesday night at home against the Rangers.

In the fifth, Tatis made a spinning stop of Jose Altuve's grounder to start an inning-ending double play.

After rookie Adrian Morejon allowed three runs before getting the second out of the game, the Padres held Houston scoreless the rest of the way.

Stammen pitched 1 1/3 perfect innings for the win. Emilio Pagan, the Padres' sixth pitcher, worked a 1-2-3 ninth for his second save in six chances.

Greinke kept the Padres off-balance until the fourth, when they broke through to tie the game at 3. Tatis hit a leadoff single for San Diego's first hit and scored on Eric Hosmer's double into the right-field corner. Wil Myers walked and rookie Jake Cronenworth singled to right to bring in Hosmer.

Greinke complained about the mound, and the game was delayed so the grounds crew could work on it. Due to coronavirus protocols, all the players had to leave the field, although Greinke returned after a few minutes and was showing the workers what to do. Greinke then sat down cross-legged on the grass behind the mound while the workers smoothed the dirt.

The Astros jumped on Morejon for three runs in the span of the first four batters. Springer drew a leadoff walk and scored on Carlos Correa's one-out single. Kyle Tucker followed with a two-run homer to left-center, his third.

Greinke allowed three runs and four hits in six innings, struck out four and walked two. He came in 13-3 with a 2.37 ERA against San Diego in 25 career starts.

Morejon was on a pitch limit, so he was lifted with two outs in the second after throwing 36 pitches. He allowed three runs and three hits, struck out three and walked one in 1 2/3 innings.

UP NEXT
Astros: Haven't named a starter for Monday night's home game against the Angels.

Padres: After a day off, RHP Chris Paddack (2-2, 4.26) is scheduled to start Tuesday night in the opener of a three-game home series against Seattle, which will counter with LHP Marco Gonzales (2-2, 3.34).