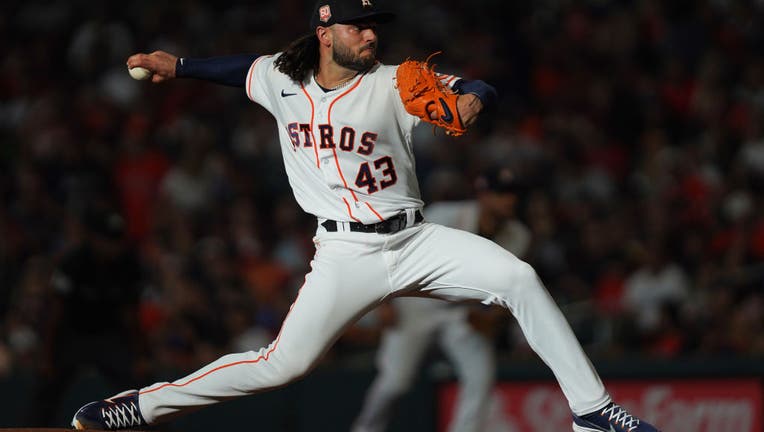 "He was surprisingly sharp with most of his pitches, especially his breaking stuff," Astros manager Dusty Baker said. "He was very competitive today. We didn't know what to expect. He was great."

The 28-year-old McCullers (1-0) pitched for the first time in 305 days for Houston, last going for the Astros in Game 4 of the 2021 AL Divisional Series against the Chicago White Sox. McCullers went on to miss the 2021 ALCS and World Series for the Astros due to a right flexor tendon strain.

"It felt good, I was a little bit anxious before the game," McCullers said. "Everyone's been so supportive and really have helped me get back to this point. I'm talking about guys in the clubhouse and they were all excited for me to be back today. So, I just wanted to pitch well and do my thing for them.

"All-in-all, I felt my stuff was really good, especially as the game went on."

McCullers got plenty of offensive support from the start.

In the first inning, Bregman belted his 15th homer of the season, making it 2-0. It was Bregman’s ninth home run and 33rd RBI since June 17.

The Astros tacked on two more runs in the sixth, stretching the lead to 6-0. The inning was highlighted by Mancini’s RBI double as he finished 3 for 4. Since being acquired by Houston from Baltimore, Mancini is 8 for 27 with eight RBIs.

Kyle Tucker and Chas McCormick each had an RBI triple. It was Tucker’s team-leading 76th RBI of the season.

"I think guys are stringing at-bats together and just doing a really good job," Bregman said. "Everybody's working their tail off."

"Overall, for Zach, I think he missed some locations today that really hurt him against a good hitting team," Oakland manager Mark Kotsay said. "These guys, obviously, are professional hitters and take advantage of those mistakes when balls are over the middle. They don’t miss very many of them and they obviously didn't today."

The Athletics were limited to five hits and left six runners on base.

As McCullers made his way in from the bullpen prior to the start of the game, he was announced as the starter and welcomed by a roar from the crowd and then again when he ran out to the mound for the first time.

"Fans are incredible," McCullers said. "Houston is my home for a reason. This is special to me. I just love being here, and I can tell they enjoy me being here as well. A large part of what I do and what we do in this clubhouse is because of how great they are."

After inducing an inning-ending double play to close out the sixth, McCullers let out a big scream as he walked off the field. He then looked up to the crowd and blew a kiss towards the 34,078 on hand.

But that kiss was directed at certain people in the stands as he concluded his first start of the season.

"My daughter was here," McCullers said. "It's probably the first time she really knows what's going on now and she got to see me pitch. And then my grandfather was here. He had a stroke a few years ago and this was the first time he's seen me pitch since. It was a big day for me."

Astros: RHP Cristian Javier (6-8, 3.14 ERA) will close out the six-game homestand for Houston on Sunday. Javier is seeking his first win since July 1 as he has taken the loss in five of his last six outings. Last time out against Oakland, Javier gave up three runs on five hits, walked one and struck out six in five innings.