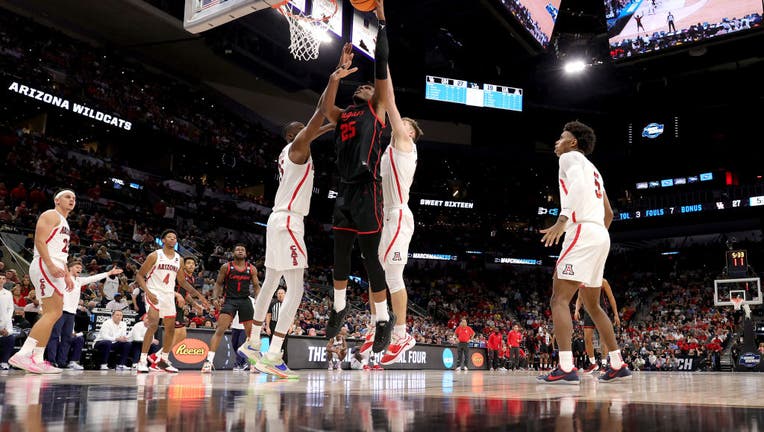 SAN ANTONIO, TEXAS - MARCH 24: Josh Carlton #25 of the Houston Cougars shoots against the Arizona Wildcats during the first half in the NCAA Men's Basketball Tournament Sweet 16 Round at AT&amp;T Center on March 24, 2022 in San Antonio, Texas. (P

SAN ANTONIO (AP) -- Jamal Shead scored a career-high 21 points and Houston led throughout in a 72-60 victory over top-seeded Arizona on Thursday night, moving the Cougars within one win of a second straight Final Four.

With Taze Moore getting into early foul trouble after his 3-pointer for a 5-0 lead in the first two minutes, Shead and Kyler Edwards were both on the court nearly the entire game for the Cougars (32-5). Edwards, the Texas Tech transfer who played in the 2019 national championship game for the Red Raiders, had 19 points with five 3-pointers.

After quick consecutive layups by Dalen Terry got Arizona within 64-58 with just over two minutes left, Edwards settled things for Houston with a 3 from the right wing.

Houston plays second-seeded Villanova (28-7) in the South Region final on Saturday in San Antonio, which is about 200 miles from the UH campus.

Terry had 17 points for the Wildcats (33-4), while Pac-12 player of the year Bennedict Mathurin had 15 and Christian Koloko 10,

The American Athletic Conference champion Cougars became the second former Southwest Conference team to knock a No. 1 seed out of this NCAA Tournament in a matter of hours. Top overall seed Gonzaga lost 74-68 to Arkansas, which went to the SEC in 1991, five years before the SWC's final season.

These Cougars are much different than the ones coach Kelvin Sampson took the the Final Four last year -- their first since going three times in a row during the Phi Slama Jama era from 1982-84.

Arizona had one of the least-experienced teams in Division I this season; according to KenPom.com, the Wildcats average 0.63 years of experienced, ranked 355th out of 358 teams. But they won 33 games, and two of their losses were on the road during the regular season against top-20 teams.

Those 33 wins left Tommy Lloyd one win shy of the most in NCAA history for a first-year coach. He took over the Wildcats after 21 seasons as an assistant coach for Mark Few at Gonzaga.