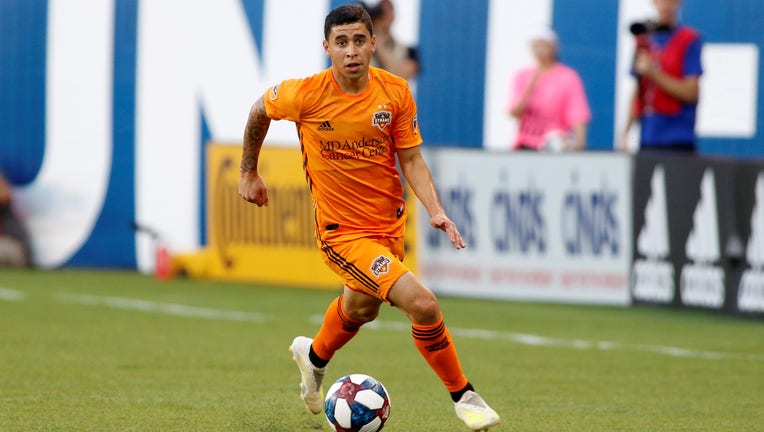 CINCINNATI, OHIO - JULY 06: Matias Vera #22 of the Houston Dynamo brings the ball up the field in the game against the FC Cincinnati at Nippert Stadium on July 06, 2019 in Cincinnati, Ohio. (Photo by Justin Casterline/Getty Images)

Forward Mauro Manotas finished with the most goals in league play for his second consecutive Golden Boot honor. Slovenian international Kiki Struna was named the Defender of the Year in his first season with the club. Dynamo Academy product Memo Rodriguez was voted Young Player of the Year after a breakout season. The First Team roster voted DaMarcus Beasley as their Players’ Player of the year.

Local Houston media and the team’s technical staff voted for four categories while First Team players voted for the Players’ Player of the Year Award.

Vera was an undisputed starter in his first season with the Dynamo after joining the club last December on a transfer from San Lorenzo in his native Argentina. The defensive midfielder finished with 102 tackles and tallied an assist in 30 league games. The 24-year-old also scored a goal in Houston’s 3-2 victory over Austin Bold in the Fourth Round of the Lamar Hunt U.S. Open Cup. Vera also finished with the most minutes played this season with 2,639.

Manotas finished with the team Golden Boot after scoring 15 goals in the league and international competitions. Manotas scored a brace in the return leg of the Scotiabank Concacaf Champions League Round of 16 series with CD Guastatoya on Feb. 26 to help the Dynamo advance to the quarterfinals and earn Team of the Week honors. The Colombian striker finished with 13 goals in league play and this was the third consecutive season where Manotas finished with 10 or more goals in league play, a first for the club. The 24-year-old also tallied eight assists in 2019, a new career-high for the striker.

Struna commanded the backline throughout the 2019 season in 29 matches for the Dynamo. The center back also tallied an assist in Houston’s 4-2 victory over the LA Galaxy on Decision Day, presented by AT&T. The Slovenian defender joined the club on a full transfer from US Palermo last December.

Beasley was voted by his teammates as the Players’ Player of the Year. Beasley retired at the end of the 2019 season and recently announced his participation in a project that will bring 15 mini-pitches to the Greater Houston-area in the next five years - an initiative that began with Dynamo minority owners Jake Silverstein and Ben Guill. On the field, the veteran defender reached 10,000 minutes with the Dynamo against FC Dallas on Aug. 25 and scored the equalizer in the Leagues Cup showdown with Club America on July 24., his last tally for the club.