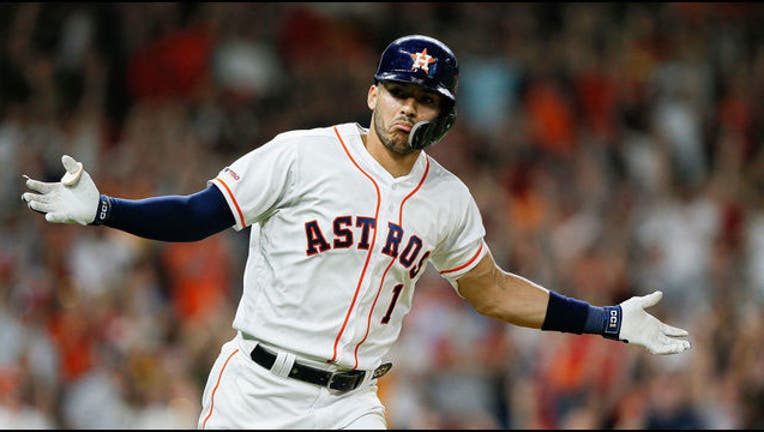 HOUSTON, TEXAS - MAY 25: Carlos Correa #1 of the Houston Astros celebrates after hitting a walk off single in the ninth inning against the Boston Red Sox at Minute Maid Park on May 25, 2019 in Houston, Texas. (Photo by Bob Levey/Getty Images)

HOUSTON (AP) - With the bases loaded in the ninth inning, Carlos Correa had a straight-forward approach.

"I'm thinking, 'I've got to finish this game,'" Correa said.

He did, hitting an RBI single to give the Houston Astros a 4-3 victory over the Boston Red Sox on Saturday night.

After Boston tied it in the top of the inning, Aledmys Diaz led off the bottom with a double to left off Matt Barnes (2-1). Following walks to Alex Bregman and Michael Brantley, Correa hit a blooper down the right-field line over a five-man infield.

"I didn't really want to give the at-bat to Yuli (Gurriel)," Correa said. "A walk or a sac fly would get the job done. I'm not trying to do too much, I'm just trying to put the ball in play to right-center field and it happened to fall for a hit."

Barnes said the issues in the ninth were on him.

"I just stunk," Barnes said. "Flat out. I couldn't command stuff. ... I just didn't execute enough pitches. I left stuff over the middle of the plate or I wasn't around the plate enough."

The winner was Correa's first since June 23, 2018, against the Royals

"Once I hit it, I knew it was going to stay fair," Correa said. "It was on a line over the first baseman. That's why I started celebrating right when I hit it."

After Roberto Osuna (3-0) loaded the bases, Christian Vazquez hit a two-run single for Boston to tie it at three.

Osuna recovered to strike out Steve Pearce and got Andrew Benintendi on a popup and a Mitch Moreland groundout to end the inning.

The blown save ended a streak of 28 straight converted saves for Osuna.

"It's one of those days they attacked me early, but I was able to make the adjustment late in the inning and keep the leading run on third," Osuna said.

Josh Reddick and Tyler White hit RBI singles in the sixth for Houston, and Benintendi cut the lead to 2-1 with RBI single in the seventh.

The Astros answered with Gurriel's RBI single in the bottom of the seventh.

"Certainly a big win for us and the way we came back," Houston manager AJ Hinch said. "It's again proof that they're never out of a game. They're always in the game."

David Price lasted three batters and 15 pitches before leaving with two out in the first due to flu-like symptoms. Price said he had been feeling sick for three or four days, with achiness all over, but he was trying to make pitches.

"I could have just ducked this start from the get go," Price said. "I didn't want to do that. I didn't want to put us in that position. I went out there and tried to take the ball and (Cora) didn't like what he saw, so he took me out of the game. I wanted to stay in the game when he came out there. That's that."

Red Sox: INF Brock Holt (shoulder) was scheduled to arrive in Houston prior to the game Saturday and could be activated from the injured list as early as Sunday. ... 2B Dustin Pedroia (knee) did not play Saturday and would not play in a rehabilitation assignment on Sunday, Cora said, adding that the Red Sox would check him out Monday. "It's another red flag, Cora said. "He didn't feel right yesterday. He's not going to push it. He's not going to make it worse," Cora said. ... RHP Nathan Eovaldi (elbow) threw a bullpen session Saturday that Cora characterized as "really good".

Astros: OF George Springer was placed on the 10-day injured list with a left hamstring strain. Hinch said he expected Springer will be out longer than the 10 days but no timetable was given. The Astros recalled OF Derek Fisher from Triple-A Round Rock to take Springer's spot on the roster. ... 2B Jose Altuve (hamstring) will start a rehabilitation assignment with Round Rock on Sunday. ... C Max Stassi left in the fifth with left knee discomfort.