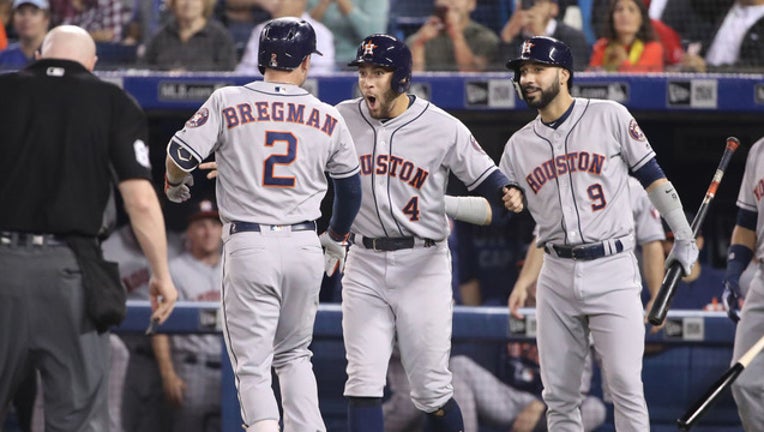 Alex Bregman of the Houston Astros is congratulated by George Springer after hitting a 2-run home run in the first inning during MLB game action against the Toronto Blue Jays at Rogers Centre on September 25. (Photo by Tom Szczerbowski/Getty Images)

Houston improved to 100-57 and would clinch the division with one more win or a loss by second-place Oakland (95-62), which played later at Seattle. Seeking their second straight AL West title, the Astros need three wins in their final five games to break the franchise record for victories in a season, set in 1998. Houston is 18-4 in September and 54-22 on the road, both best in the major leagues.

Roberto Osuna needed just six pitches in the ninth for his 20th save in 21 chances, completing a six-hitter. Earlier Tuesday, assault charges against Osuna were dropped because the complainant, who lives in Mexico, made clear she would not travel to Toronto to testify. Osuna agreed to stay away from the alleged victim for one year and continue counseling.

Traded from Toronto to Houston in July, Osuna was booed by Blue Jays fans for the second straight game, starting with when he entered and then in between pitches.

Bregman went 2 for 5 and extended his club-record streak of reaching base safely on the road to 53 games, then longest since 59 in a row by the New York Yankees' Derek Jeter in 2006 and 2007.

Bregman hit his 31st homer, a two-run drive in the first off Sam Gaviglio. Billy McKinney's sixth homer cut the gap in half in the third, but Houston widened its lead in the sixth when Tyler White chased Gaviglio with an RBI single and pinch-hitter Evan Gattis had a sacrifice fly off righty Danny Barnes.

Blue Jays: RHP Aaron Sanchez had season-ending surgery Tuesday on his troublesome right index finger and is expected to be ready for spring training. The surgery was performed in Los Angeles by t Dr. Steven Shin. The Blue Jays did not disclose the specifics of the surgery or say what it was intended to repair. Sanchez went 4-6 with a 4.89 ERA in 20 starts, including a 1-1 record and 6.04 ERA in five starts after returning from a 54-game absence. Sanchez was hurt hours before a June 21 start at the Los Angeles Angels when his finger got caught in a suitcase. ... INF Lourdes Gurriel Jr. (strained left hamstring) will miss the rest of the season. Gurriel was injured running out a ground ball in the first inning Monday.