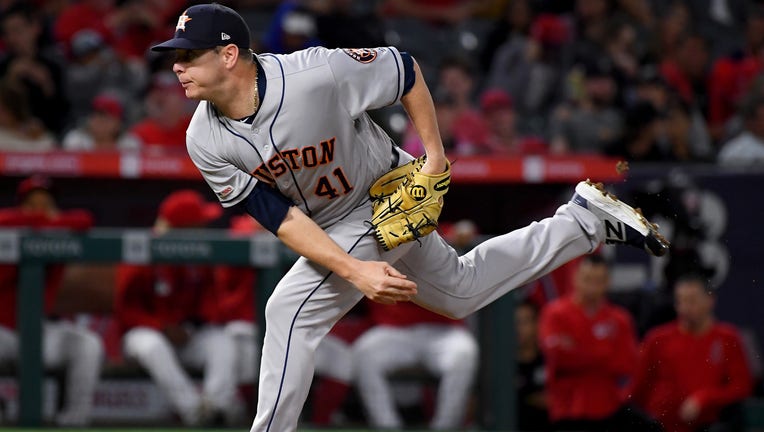 ANAHEIM, CA - SEPTEMBER 26: Brad Peacock #41 of the Houston Astros pitches in the game against the Los Angeles Angels at Angel Stadium on September 26, 2019 in Anaheim, California. (Photo by Jayne Kamin-Oncea/Getty Images)

HOUSTON - The Washington Nationals are still waiting to see whether they will be playing the Yankees or the Astros in the World Series. They could find out tonight as Houston tries to close out the American League Championship Series at home in Game 6. The Yankees avoided elimination with a 4-1 win Friday night in New York.

Brad Peacock is starting for the Houston Astros in Game 6 as they use a bullpen day to try to close out the AL Championship Series on Saturday night against a New York Yankees lineup again without slugger Giancarlo Stanton.

Peacock threw eight pitches in a scoreless eighth inning on Friday night. He will become the fourth pitcher in MLB history to finish a postseason game and then start the next day, and the first since 1924.

"He's really good at staying calm in what's going to be probably one of the more intense games that we've had this season up to date," Hinch said.

The Yankees also are using a bullpen day and starting reliever Chad Green. The right-hander is 1-0 with a 3.18 ERA in five appearances this postseason. He last pitched in Game 4 on Thursday night, when he allowed two hits and two runs in one inning.

New York manager Aaron Boone said Green is comfortable in that situation and is throwing the ball well.

"Hopefully he'll give us a little bit of length starting off," said Boone, anticipating that Green could go through the Astros' lineup once.

Edwin Encarnacion was back in the Yankees' lineup as the designed hitter after Stanton went 0 for 3 with two strikeouts as the DH in Game 5 on Friday night after missing the previous three games because of a strained right quadriceps suffered in the ALCS opener a week ago.

Boone said Stanton got through Friday's game OK, and that the switch was just one of those hard lineup decisions and not because of the lingering injury.

"I wanted to get Edwin back in there. I feel like he's got a big at-bat in him. I feel the same way about (Stanton) frankly," Boone said. "Toiled over it and decide to keep the infield as it is. ... That was just my decision."

Encarnacion is 1 for 15 in the ALCS. Stanton was 2 for 4 with a homer in Game 1 against the Astros.

"He knows there's potentially a big at-bat off the bench today," Boone said of Stanton.

Peacock, who has been a starter and also pitched out of the bullpen in his career, was left off the ALDS roster after missing time late in the season with discomfort in his throwing shoulder. Friday was his first appearance since Sept. 29.

Hinch said he didn't know how long Peacock would go. He has a 4.73 ERA in eight career postseason appearances with one start.

Peacock is one of the longest tenured Astros after joining the team in 2013. The 31-year-old pitched in some big games for the Astros during their 2017 championship run. He made four appearances in the 2017 World Series, including pitching two scoreless innings in Houston's Game 7 win over the Dodgers.

"He's as even-keeled as anybody we have," Hinch said. "We've missed him a lot throughout the last month just in how he can be a weapon ... he's pitched in a lot of different scenarios for us so this moment will not be too big for him. I don't expect him to be very emotional."