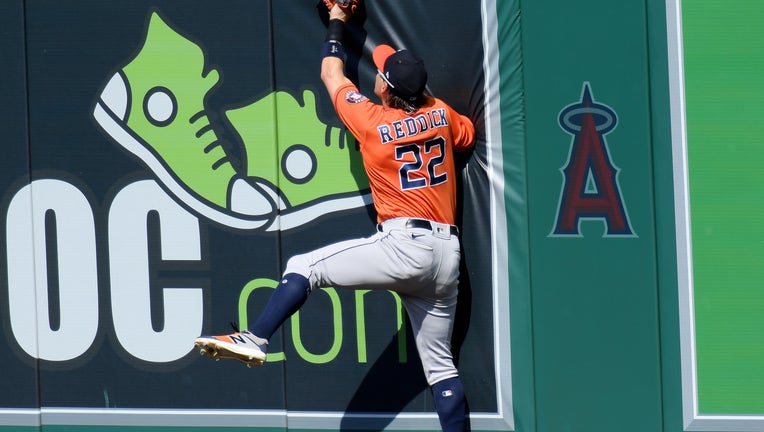 ANAHEIM, CALIFORNIA - SEPTEMBER 06: Josh Reddick #22 of the Houston Astros misses a catch on a triple from Taylor Ward #3 of the Los Angeles Angels during the sixth inning at Angel Stadium of Anaheim on September 06, 2020 in Anaheim, California. (Pho

The Angels have a won a season-high five straight and posted their first four-game sweep since 2017.

Los Angeles trailed by at least three runs in each game of the series before rallying as it went 7-3 on the homestand.

Rendon homered for the second straight game in the third inning when he lined a changeup from Framber Valdez (3-3) over the wall in left-center to tie it at 3. The third baseman -- who delivered key long balls for the Washington Nationals in last year's World Series against the Astros -- had a three-run drive to give the Angels a doubleheader sweep Saturday.

The Angels took control of the game in the eighth when their first five batters reached base. Walsh supplied the go-ahead hit when he lined a single to drive in Jo Adell. Luis Rengifo drew a bases-loaded walk to make it 7-5 and Upton delivered a one-out, two-run single off Chris Devenski.

Mike Mayers (1-0), the fifth of six Angels' pitchers used, got the win by retiring the side in order in the eighth.

"To be getting those against a team like that in our division is huge," said Taylor Ward, who had two hits and an RBI.

Kyle Tucker, Aledmys Diaz and Carlos Correa homered for Houston, who have dropped four straight after winning 15 of 21.

Despite the bad weekend, Houston remains solidly in second place in the AL West.

"Just one of those weekends where whatever could go bad, went bad. But we're still in a good position," manager Dusty Baker said. "They beat my bullpen up. We're still trying to recover from that first day, the early exit by McCullers, and then it was downhill from there."

The Astros jumped out to a 3-0 lead with three hits and three runs by their first six batters. Tucker put Houston on the board in the first with a two-out homer to right field and Diaz's solo shot to left to lead off the second.

Houston trailed 5-3 before it scored twice in the seventh to tie. Correa led off the inning by going to deep to left center and Abraham Toro's RBI double evened it.

FOR STARTERS
Baker needed a strong outing from Ramirez because his bullpen was spent. He got it as the left-hander went seven-plus innings before tiring. Ramirez gave up 11 hits and eight runs with two walks and two strikeouts.

Barria allowed three hits and three runs to the first six batters before settling down. The right-hander retired 12 of the final 13 batters he faced with the lone runner getting aboard on a walk to start the fourth. Barria struck out six and walked two.

"I went out there the first inning it was hot, I was leaving ball in the zone. I told myself to regroup and be confident in my pitches and I found a couple good innings," Barria said through an interpreter.

WEB GEM
Andrelton Simmons made a nifty over-the-shoulder grab on a fly ball hit by Jack Mayfield during the fifth inning after Upton overran it in left. According to Statcast, Simmons covered 81 feet to make the grab.

RARE DAY OFF
Reigning AL MVP Mike Trout did not play after becoming the Angels' career home runs leader with No. 300 during Saturday's first game. It is the first game he has sat this season when on the active roster. He missed four games last month when he was on paternity leave for the birth of his first child.

ANOTHER SCORCHER
It was 106 degrees at first pitch, marking the second straight day the team's played in triple-digit heat. It was 109 degrees for Saturday's first game, making it the hottest start to a game in Angel Stadium history.

It is the eighth game to start with triple-digit temperatures since the ballpark opened in 1966. Five have happened the first week of September.

TRAINER'S ROOM
Astros: P Lance McCullers, Jr. was placed on the injured list due to neck nerve irritation. The right-hander started Friday's game but was pulled after 21 pitches. The move is retroactive to Saturday. ... 3B Alex Bregman (right hamstring discomfort) is unlikely to come off the injured list during the upcoming series at Oakland. Baker said they want to make sure Bregman can come back and play regularly before activating him.

Angels: 2B Franklin Barreto appeared to injure his left shoulder after stealing second base in the sixth inning. He reached base with an RBI single that extended their lead to 5-3. ... C Max Stassi came off the injured list after missing 15 games due to a right quad strain and knee bruise.

UP NEXT
Astros: Head to Oakland on Monday for the start of a five-game series. RHP Cristian Javier (4-1, 3.35 ERA) has gone 3-0 in his last four starts

Angels: Are off Monday before the start of a three-game set in Texas Tuesday. LHP Andrew Heaney (3-2, 3.89 ERA) gets the call in the opener after tossing seven shutout innings against San Diego in his last start.