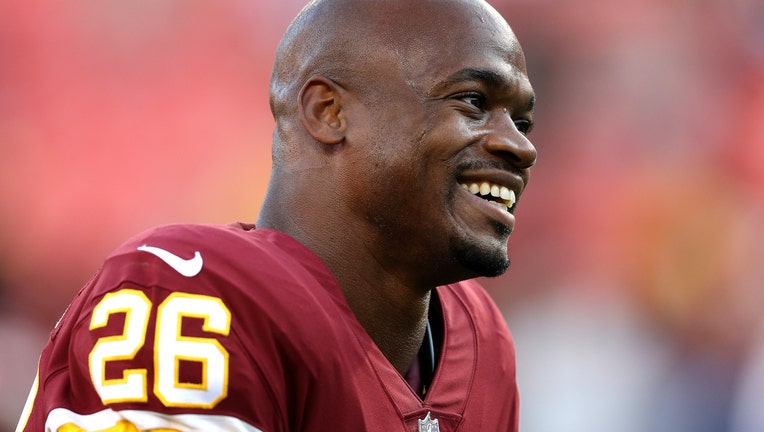 LANDOVER, MD - AUGUST 24: Running back Adrian Peterson #26 of the Washington Redskins looks on before playing the Denver Broncos during a preseason game at FedExField on August 24, 2018 in Landover, Maryland. (Photo by Patrick Smith/Getty Images)

NFL running back Adrian Peterson and his wife Ashley have donated $50,000 through their foundation to pay for meals for students and families in the Houston Independent School District during closures required due to COVID-19.

The gift was sent to the HISD Foundation, the non-profit organization that raises funds to support the district’s students, staff, and families.

The district, in collaboration with the Houston Food Bank, has assisted more than 22,000 households at food distribution sites since March 14, with plans to continue the program next week at 39 sites.

Peterson is a veteran Pro Bowl running back with the Washington Redskins who formerly played with the Minnesota Vikings. He and his wife reside in Houston during the off-season.

The Petersons chose to announce their donation in conjunction with Adrian’s March 21st birthday.

“Adrian Peterson is an outstanding MVP in HISD for making such a generous donation on behalf of the children in this district,” HISD Interim Superintendent Grenita Lathan said. “It’s his birthday, but we are getting a wonderful gift. We thank him and his wife wholeheartedly for these funds.”

The donations are through the Adrian and Ashley Peterson Family Foundation. The couple encourages others to donate to local causes during the COVID-19 crisis and to commit acts of “paying it forward” to help neighbors in need.