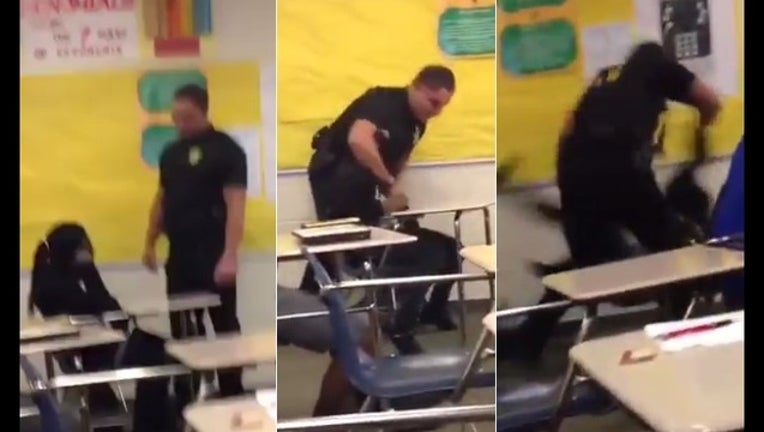 COLUMBIA, S.C. (AP) — A South Carolina school district banned a school resource officer pending an investigation after a video surfaced Monday showing him tossing a student across a classroom floor.

The incident apparently captured on a student's cellphone happened at Spring Valley High School in Columbia. School officials and sheriff's deputies said they are investigating what happened.

"Pending the outcome of the investigation, the district has directed that the school resource officer not return to any school in the district," Richland Two Superintendent Debbie Hamm said in a prepared statement.

The video shows Fields asking a girl to rise from a classroom desk. Another adult is standing nearby. The girl stays seated, so the officer wraps a forearm around the child's neck. The officer then tips the attached chair and desk backward until she spills to the floor. The officer then tosses the girl several feet across the floor to the front of the classroom where Fields ordered her hands behind her back and applied handcuffs.

"The video then shows the student resisting and being arrested by the" officer, Lott said.

Wilson said later that Lott, who is attending an out-of-town conference, "was very disturbed' by the video but asked for public patience during the investigation.

The images captured an "egregious use of force" against the student, ACLU of South Carolina Executive Director Victoria Middleton said.