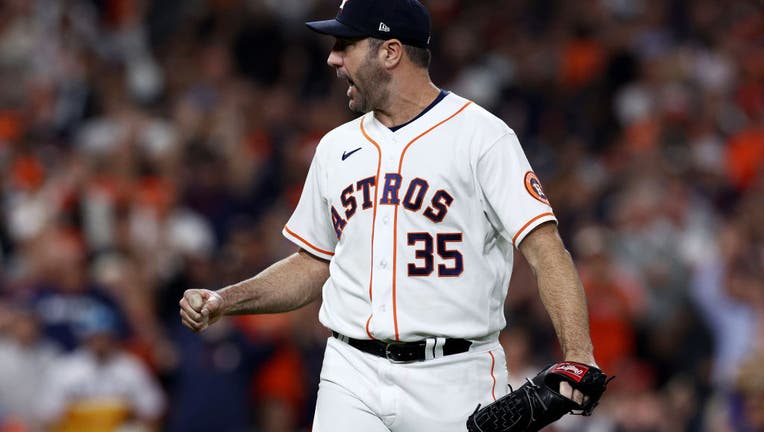 HOUSTON, TEXAS - OCTOBER 19: Justin Verlander #35 of the Houston Astros reacts are a strike out during the sixth inning against the New York Yankees in game one of the American League Championship Series at Minute Maid Park on October 19, 2022 in Hou

HOUSTON - Justin Verlander struck out 11 in six strong innings and Yuli Gurriel, Chas McCormick and Jeremy Peña all homered to power the Houston Astros to a 4-2 win over the New York Yankees in their AL Championship Series opener Wednesday night.

The Astros are in their sixth consecutive ALCS, looking to reach the World Series for the fourth time in that span, against a New York team in the LCS for the first time since being eliminated by Houston in 2019.

The game was tied 1-all in the sixth when Gurriel connected off reliever Clarke Schmidt on a solo shot to the seats in left field to put Houston on top. Two batters later, McCormick sent a sinker from Schmidt into right field to make it 3-1.

Verlander set a major league record with the eighth double-digit strikeout game of his postseason career and passed Clayton Kershaw (213) to become the all-time leader in strikeouts in the playoffs with 219.

Peña, whose 18th-inning home run completed a sweep of the Mariners in the ALDS, belted a homer off Frankie Montas to start the seventh and extend the lead to 4-1. Montas was pitching for the first time since Sept. 16 because of a shoulder injury that kept him off the Division Series roster.

Anthony Rizzo homered off Rafael Montero with two outs in the eighth to get the Yankees within two. Giancarlo Stanton singled before Josh Donaldson walked to spur Astros manager Dusty Baker to bring in closer Ryan Pressly.

He struck out Matt Carpenter to end the inning and pitched a 1-2-3 ninth to get the four-out save.

After struggling in Game 1 of the ALDS against Seattle, Verlander looked shaky early in this one, giving up a second-inning homer to Harrison Bader to put the Yankees up 1-0. But the Astros tied it in the bottom of the inning on an RBI double by Martín Maldonado.

FOX 26 Reporter Matthew Seedorff was out and about with fans just minutes after the Astros took Game 1 of the ALDS.

The Astros had a few days off after eliminating Seattle on Saturday. The Yankees dealt with a quick turnaround after winning a rain-postponed Game 5 over the Guardians at home Tuesday before heading to Houston.

They had runners at second and third with one out in the third after a double by Stanton, but Verlander struck out Donaldson and Carpenter to escape the jam.

Those were the first of six consecutive strikeouts for Verlander, which tied a postseason record. It’s the second time he’s tied the mark after also fanning six in a row in Game 3 of the 2013 ALCS while pitching for Detroit.

New York whiffed 17 times in all to only two for the Astros — the largest difference ever in a postseason game.

Verlander didn’t allow a baserunner after the third inning, retiring his last 11 in a row with nine strikeouts. When he struck out Carpenter to end the sixth, he pumped his fist and yelled before trotting off the field to a huge ovation from the mostly orange-clad home crowd.

He allowed three hits and one run in his 32nd career postseason start, 11th in a series opener. It was his first playoff win since 2019.

Peña doubled twice before his homer in the seventh to give him seven hits this postseason. The performance of the rookie, who took over for Carlos Correa at shortstop this season, has helped the Astros this October as superstar Jose Altuve has struggled.

Altuve, a three-time batting champion, went 0 for 3 with a walk to fall to 0 for 19 this postseason.

Stanton played left field Wednesday with Aaron Hicks out for the rest of the postseason with a sprained knee he sustained in an outfield collision Tuesday. It was Stanton’s first appearance in the field since July 21 and his rust showed early when he couldn’t grab a fly ball that Peña hit for a double with one out in the first.

New York starter Jameson Taillon walked Yordan Alvarez after that, but Aaron Judge robbed Bregman of a hit and saved at least one run and maybe more when he made a diving catch in right field for the second out of the inning.

Taillon yielded four hits and a run in 4 1/3 innings.

Judge was 0 for 4 with a strikeout after hitting his second home run of the postseason Tuesday.

Astros third base coach Gary Pettis was out Wednesday because of an illness.

Roger Clemens, who played for both the Yankees and Astros in a 24-year MLB career where he won seven Cy Young Awards, threw out the ceremonial first pitch Wednesday.

He stepped a couple of feet in front of the rubber before throwing a perfect strike to Houston starter Lance McCullers.

"Every time I get out there, he looks further and further (away)," the 60-year-old Clemens said. "So, I’m just glad it made it there."

Asked for a prediction on the series, Clemens didn’t give any insight into who he’s pulling for this week.

Houston’s Framber Valdez (0-0, 3.18 ERA) opposes Luis Severino (0-0, 4.76) when the series continues Thursday night. Valdez allowed four hits and two runs in 5 2/3 innings of Game 2 of the ALDS but did not factor in the decision.

Severino also didn’t factor in the decision in his last start when he yielded eight hits and three runs in 5 2/3 innings in a 6-5 win by Cleveland in Game 3 of the division series.