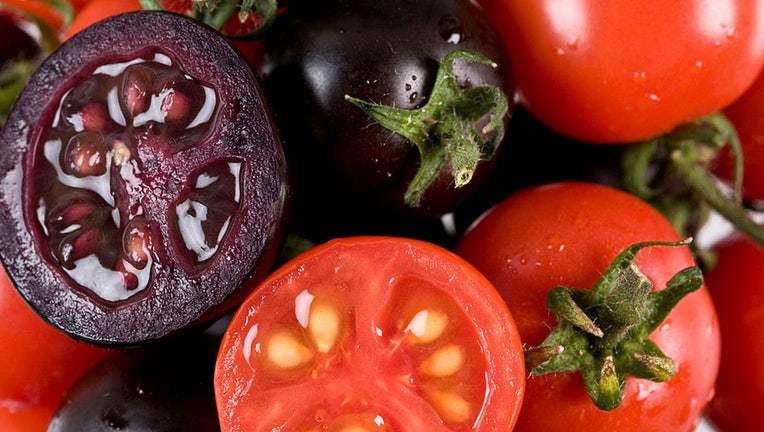 The United States Department of Agriculture recently gave its stamp of approval to grow genetically modified purple tomatoes which were created in the United Kingdom.

The purple tomato created by Norfolk Plant Sciences, a spinout company from the John Innes Centre and The Sainsbury Laboratory, has been modified not just to look different but also has enhanced nutritional quality, according to the USDA.

"This is fantastic, I never thought I would see this day. We are now one step closer to my dream of sharing healthy purple tomatoes with the many people excited to eat them," Professors Cathie Martin, who developed the anthocyanin-rich purple tomato in 2008, said in a company news release.

Anthocyanin is a type of antioxidant which can benefit those who are seeking an anti-inflammatory diet, Norfolk Plant Sciences’ website states.

"Anthocyanins possess antidiabetic, anticancer, anti-inflammatory, antimicrobial, and anti-obesity effects, as well as prevention of cardiovascular diseases," according to a National Institute of Health study.

Additionally, it was observed that the purple tomatoes had an extended shelf life "compared to wild-type, red fruit," according to the NIH study.

Seeds from the GMO purple tomatoes could be available in the U.S. as soon as spring 2023, Martin said. However, despite being created in the U.K., they will not be made available there.

"The bittersweet thing is that the tomatoes will be on sale in America and not the UK as well. But the plus side is that by focusing on home growers we will be consumer oriented, and we will be able to get feedback and interest needed to develop other products," she said.

Although the U.K. left the European Union in 2020, many of its strict regulations on GMOs still emulate those of the E.U., according to Harvard University.

But that could change. In 2021, Britain’s government announced it would allow researchers to use gene-editing techniques to develop crops that can increase yields, reduce the need for pesticides and cut greenhouse gas emissions.

Martin is hopeful that eventually, the U.K. will allow its citizens access to the enhanced purple tomato as well.

"We also look forward to sensible regulatory frameworks for such products in the UK, and effective methods to protect our major crops from disease, using genetics instead of chemistry," Martin said.

RELATED: 'It's where the food industry is going:' The future of GMOs in your food

What is a GMO?

GMO stands for genetically modified organism, which can include plants or animals that are used for consumption. If a food is categorized as GMO, it means its DNA has been modified in a way that does not occur naturally, according to the World Health Organization.

Currently, mostly GMO plants have been approved for consumption, but more than 95% of animals used for meat and dairy in the U.S. consume GMO crops, according to the U.S. Food and Drug Administration.