Many states also are pursuing federal approval to conduct tests for the virus at their own labs.

With worries growing about the new coronavirus in the U.S., state officials are ramping up efforts to prepare for a possible outbreak while simultaneously trying to assure the public that they are well-positioned to handle it.

Governors and legislators in several states have proposed pumping millions of dollars into programs to combat the virus that causes the Covid-19 illness. State health officials are checking on stockpiles of supplies such as face masks and respirators and arranging potential isolation sites for sick patients.

Many states also are pursuing federal approval to conduct tests for the virus at their own labs, which could confirm or rule out potential cases more rapidly than waiting on results from federal labs.

Governors in several states — including the three most populated, California, Texas, and Florida — planned to hold news conferences Thursday to address concerns about the coronavirus. State officials are walking a fine line between between not stirring unnecessary anxieties while still keeping the public informed.

Republican Florida Gov. Ron DeSantis, for example, pledged to notify the public if anyone tested positive for the new virus in his state. But the state's surgeon general declined to confirm if any suspected cases had been investigated. He and the governor cited state laws for withholding any statistical information.

That didn't sit well with some other elected officials. Democratic U.S. Rep. Stephanie Murphy, who represents the Orlando area, called for more transparency.

“As a top tourist destination and home to many vulnerable seniors, Florida is uniquely at risk from the threat of this illness,” she said after the governor's news conference.

Top health officials from many states met this week in Washington with officials from President Donald Trump's administration. While the Centers for Disease Control and Prevention has warned public institutions, businesses and individuals to get ready for the disease, Trump has said there is no need to panic and that the U.S. is “very, very ready” to handle any outbreak.

The virus causes fever and coughing and, in serious cases, shortness of breath or pneumonia. Some symptoms are similar to influenza, which the CDC says has sickened tens of millions of U.S. residents and led to thousands of deaths since last fall.

Though the number of Covid-19 cases remains low in the U.S., the spread of the virus from China through Asia and elsewhere has alarmed some state and local officials.

“I think we’ve entered a new phase in terms of the preparations. ... It’s not a matter of ‘if,’ it’s ‘when,'" Minnesota Gov. Tim Walz told reporters Wednesday. “We are starting to step up our coordination amongst agencies.”

A new coronavirus case announced Wednesday in California could be the first in the U.S. that has no known connection to foreign travel or another known case, a possible sign the virus is spreading in a U.S. community, health officials said. Even before then, some cities and counties in California have preemptively declared local health emergencies. 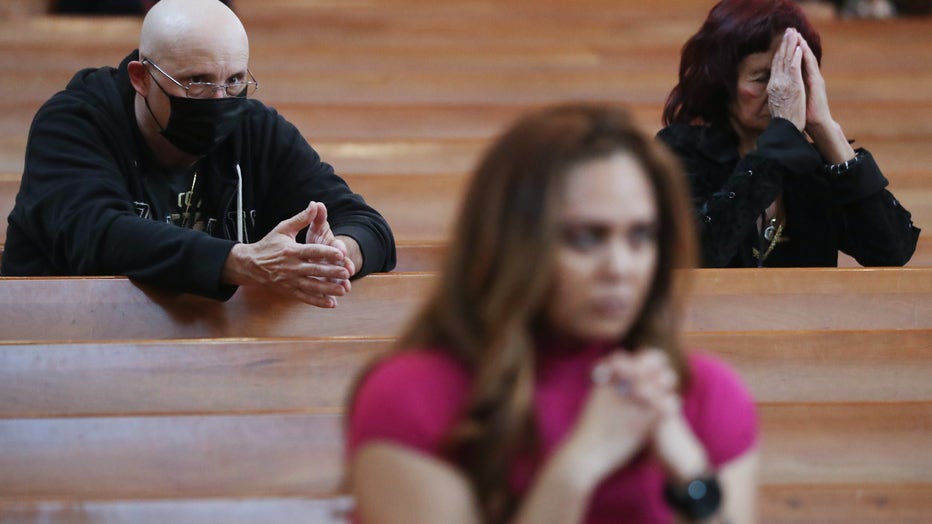 FILE - A worshipper (L) wears a face mask to protect against the coronavirus while sitting in a pew at the Cathedral of Our Lady of the Angels on Ash Wednesday on February 26, 2020 in Los Angeles, California.

Federal health officials have already burned through $105 million in emergency funding while preparing for the coronarivus. Trump has requested an additional $2.5 billion to combat the virus, while congressional Democrats have proposed nearly four times that amount. But some state officials are not waiting for Congress to act.

New York Gov. Andrew Cuomo has said he will ask lawmakers to approve $40 million to respond to the threat, including hiring additional state health workers and buying supplies such as protective masks and gloves. In New York City alone, more than 1.5 million protective masks already have been given to health care workers and first responders, and the city is seeking more.

Several other states also are looking to set aside additional money because of the coronavirus.

Hawaii Gov. David Ige has asked lawmakers to allocate $7.2 million for the next four months. In Minnesota, Republican state Sen. Jerry Relph plans to seek to add $5 million to the state’s emergency account for public health. Different budget plans in the Washington state House and Senate each include $5 million of state funding that could go to establish a dedicated call center, monitor known coronavirus cases and provide support for local health officials.

"Already, we are seeing our capacity maxed out," Rattay said. "Staff are spending many, many hours on this, and there's still core public health work that needs to be completed. We can't just stop everything else that we do on a regular basis.”

New Hampshire Gov. Chris Sununu sent a letter Wednesday to the state’s congressional delegation urging that additional coronavirus funding be approved quickly. “Now is not a time for partisan games and grandstanding," he wrote.

Health officials in many states told The Associated Press that their preparations rely on current staff and budgets and existing public health frameworks. One key exception is that most states have so far been unable to run their own laboratory tests on potential coronavirus cases, because they have not received federal clearance to do so. States instead have had to send samples to the CDC, which has delayed the response time.

But that could change soon. Missouri received word Thursday that it has been approved to start running tests at its own medical laboratory, and similar notices should be arriving at other states, said Bill Whitmar, director of the Missouri health lab and president-elect of the Association of Public Health Laboratories.