Russia-Ukraine War: Journalist in Ukraine checks in as Putin's war rages on

War in Ukraine continues with Russian troops attacking cities across the country. LiveNOW from FOX checks in with journalist Mark Savchuk in Kyiv, Ukriane on the latest updates.

WASHINGTON - The U.S. on Monday will begin a streamlined process to welcome Ukrainian refugees, including an opportunity for Americans to sponsor those applicants as well.

President Joe Biden announced details of the program last week, called "Uniting for Ukraine." Officials said it will offer Ukrainian citizens "who have fled Russia’s unprovoked war of aggression opportunities to come to the United States."

Biden has made a commitment to welcome up to 100,000 Ukrainians fleeing Russia’s invasion. The State Department also announced an increase in the refugee settlement process and plans to broaden access to visa processing at consular posts overseas.

"We are proud to deliver on President Biden’s commitment to welcome 100,000 Ukrainians and others fleeing Russian aggression to the United States," Secretary of Homeland Security Alejandro N. Mayorkas said in a statement posted on the department’s website. "DHS will continue to provide relief to the Ukrainian people, while supporting our European allies who have shouldered so much as the result of Russia’s brutal invasion of Ukraine."

To be eligible, Ukrainians must have been residents in Ukraine as of Feb. 11, have a sponsor in the United States, complete vaccinations and other public health requirements, and pass biometric and biographic screening and vetting security checks.

Those who gain approval will be able to travel to the U.S. on a case-by-case basis for a period of up to two years. They will also be eligible for work authorization. 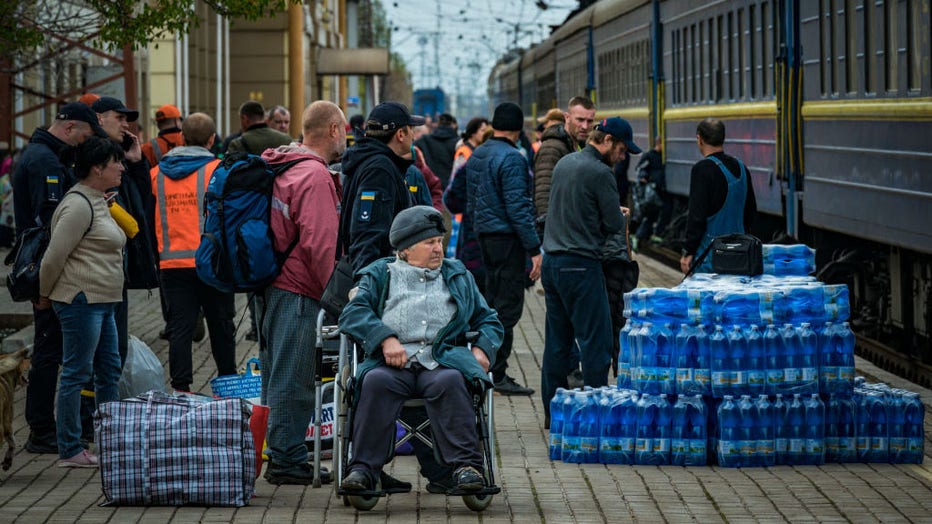 FILE - A woman in a wheelchair waits for her evacuation to Dnipro city in the Pokrovsk train station. Many civilians from Donbass area are evacuated to safe places in Ukraine after their villages on the frontline of Donbass were constantly shelled by

Public support doesn’t seem to be an issue. An Associated Press-NORC Center for Public Affairs Research poll shows 65% of Americans favor accepting Ukrainian refugees into the U.S., while 15% oppose it. An additional 19% say they neither favor nor oppose.

The number of people who have fled Ukraine since Russian troops invaded has surpassed 5 million, the United Nations reported last week as Moscow continued its offensive in Ukraine’s eastern industrial heartland.

More than half of the refugees, over 2.8 million, fled at least first to Poland, according to the U.N. They are eligible for national ID numbers that entitle them to work, free health care, schooling and bonuses for families with children. Although many have stayed there, an unknown number have traveled on to other countries, the agency said.

Farther south, Hungary has emerged as a major transit point for Ukrainian refugees. Out of more than 465,000 who arrived, some 16,400 have applied for protected status, meaning they want to stay.

Neighboring Romania has also received over 750,000 refugees from Ukraine.