HOUSTON (FOX 26) The greater Houston area has a new location to get a COVID-19 vaccination. Thursday morning at 7:00 A.M. thousands who had an appointment were able to line up at NRG Park to get the vaccine.  Memorial Hermann has teamed up with NRG Park to make this happen. The clinic started today and will last until Sunday, from 7:00 AM TO 7:00 PM. About 13,000 people are expected to get their vaccinations over the next 4 days.
Unfortunately, no more spots are available, FOX 26 was told that within three hours appointments were filled, therefore walk-ins will not be accepted.
Scenes similar to this across the country as other states are using places like football stadiums, ballparks, and fairgrounds to speed up the distribution process and hopefully alleviate long lines.

DALLAS (AP) - Texas' solicitor general who didn't join embattled Attorney General Ken Paxton's failed efforts to overturn the 2020 election results is resigning. Solicitor General Kyle Hawkins didn't say why he was leaving in a statement Wednesday but praised Paxton as a "stalwart advocate for Texas." Still, the departure continues a dramatic shakeup of Paxton's office that began in September when his top deputies accused the Republican of bribery and abuse of office on behalf of a donor. All eight of his accusers have since quit or been fired, and their accusations are the focus of an FBI investigation into Paxton.

HOUSTON (AP) - Houston's police chief says an officer is being investigated for possibly taking part in the mob attack on the U.S. Capitol. Houston Police Chief Art Acevedo said Wednesday that the officer has been placed on administrative leave and will face a disciplinary review hearing on Friday. Acevedo did not identify the 18-year veteran with the department. Acevedo says the officer was within his rights when he attended a rally in support of President Donald Trump, but that authorities have determined the officer later "penetrated the Capitol." The Houston Police Officers' Union has not returned a call seeking comment.

DALLAS (AP) - Federal officials say a West Texas flower shop owner who posted a video on Facebook bragging about House Speaker Nancy Pelosi's office being broken into during the U.S. Capitol riot last week has been arrested. A spokesman for the U.S. Attorney's Office in San Antonio says the FBI arrested Jenny Cudd and another Midland resident, Eliel Rosa, on Wednesday. They appeared in court Wednesday and each is charged with entering a restricted building and disorderly conduct, both misdemeanors. Cudd has told The Associated Press she didn't personally go into Pelosi's office and that she didn't do anything violent or destroy any property. 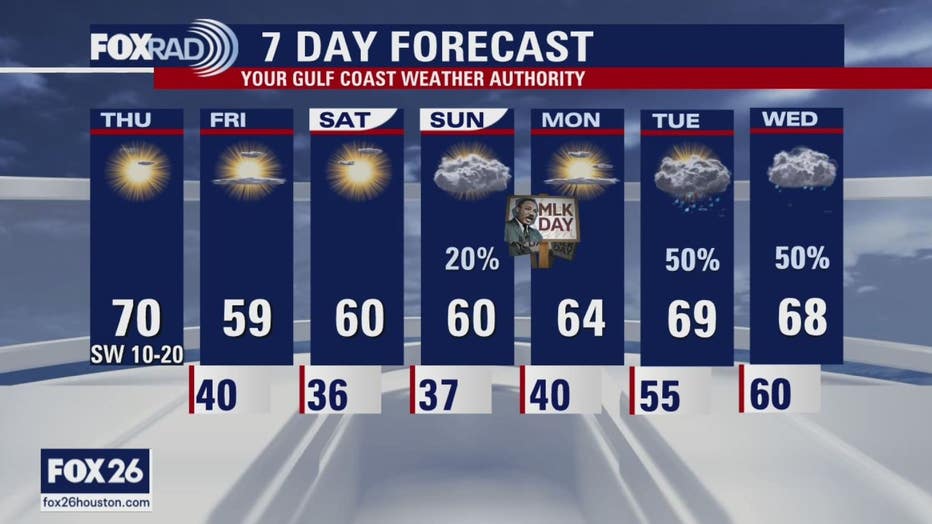 Today is likely to be the warmest day we'll see for a while as highs will approach 70. A late-day cold front will usher in more cold air, especially in the mornings this weekend. There may be a few isolated showers on Sunday and Monday before higher rain chances for Tuesday and Wednesday.