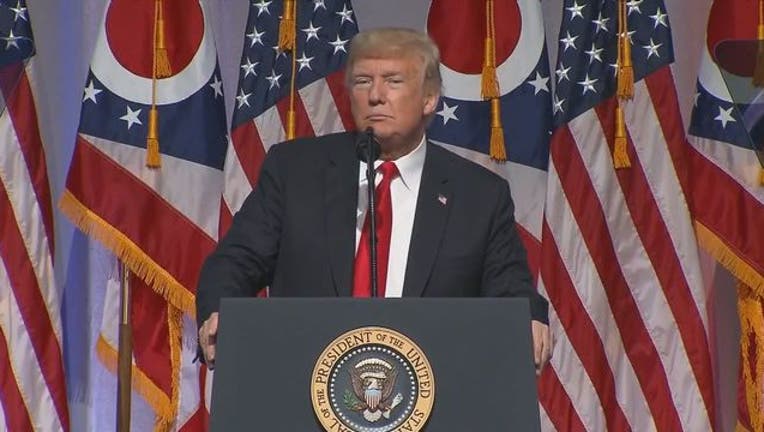 Trump praised the slate of Republican candidates during a fundraising dinner in the nation's premier battleground state but noticeably avoided mentioning Gov. John Kasich, one of his 2016 primary opponents and sharpest critics, who skipped the event.

A subdued Trump, who has been grappling with the defection of some longtime loyalists amid investigations into his 2016 campaign, skewered Democrat Richard Cordray "as a far-left candidate" who was "groomed by Pocahontas." That was a reprise of his insult of Massachusetts Sen. Elizabeth Warren, a possible 2020 presidential challenger, over her Native American heritage.

"Cordray will destroy your state," Trump said without going into specifics. Cordray, who led the Consumer Financial Protection Bureau in Washington during the Obama administration, worked closely with Warren, who helped create the agency before she won a Senate seat.

Ohio is holding a number of high-stakes races for governor, Senate and several U.S. House seats that could factor into GOP control of Congress this fall — and linger into Trump's next presidential campaign.

The president charged Democrats with being unable to govern, returning to his longstanding critique that the party has failed to help secure the nation's Southern border and turned its back on American institutions. He cited calls by some Democrats to abolish the Immigration and Customs Enforcement agency, which Trump has repeatedly praised.

He also complained that with Democrats, "It's always negative, nasty, the way they come after me." Polls show that majorities of Democrats disapprove of Trump's job performance, but he said they need to get over it and accept that he's president.

"Get used to it. We won the election. We're going to win again in 2020 and hopefully we're going to keep winning. These are nasty people," he added.

Trump sought to help Mike DeWine, a former U.S. senator and current state attorney general who is running for governor, and Rep. Jim Renacci, who is attempting to unseat Democratic Sen. Sherrod Brown.

But his help came amid deep GOP internal divisions in the nation's top swing state, punctuated by Trump's rift with Kasich.

Kasich said in a recent interview that "people are getting sick and tired" of the partisan warfare coming out of the Trump White House and dismissed the president's overwhelming popularity within the GOP as a byproduct of a shrinking party.

A Kasich spokesman said the term-limited governor had a personal scheduling conflict and couldn't attend Friday's dinner. Kasich has skipped all of Trump's previous appearances in the state, starting with the 2016 Republican National Convention in Cleveland.

"This November, we're going to win really big. It's going to be one big Ohio family," Trump said Friday.

Trump flew to Ohio with his wife, Melania, and the couple toured the neonatal intensive care unit at Nationwide Children's Hospital, where babies born drug-dependent receive specialized treatment, before he addressed the dinner.

Both the president and first lady say they are focused on the epidemic of opioid addiction that is killing tens of thousands of people a year.