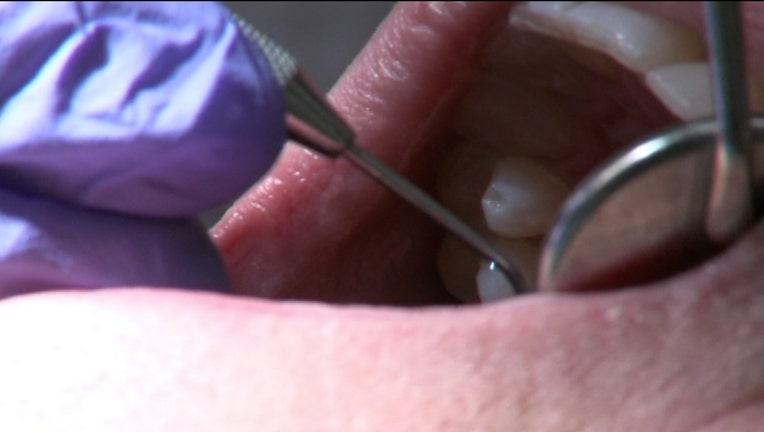 NEW YORK - In two separate studies looking at more than 1,300 people, researchers found that patients with gum disease had twice as many strokes due to the thickening and hardening of arteries in the brain compared to patients without gum disease.

"Gum disease is a chronic bacterial infection that affects the soft and hard structures supporting the teeth and is associated with inflammation," Dr. Souvik Sen, an author of both studies, said in a news release. "Because inflammation appears to play a major role in the development and worsening of atherosclerosis, or 'hardening' of blood vessels, we investigated if gum disease is associated with blockages in brain vessels and strokes caused by atherosclerosis of the brain vessels."

Patients with gum disease were three times as likely to have a stroke involving blood vessels in the back of the brain, which controls vision, coordination and other functions, the researchers found. The patients were also 2.4 times more likely to have severely blocked brain arteries.

However, the two studies didn't confirm that gum disease causes artery blockage or stroke risk. Nevertheless, the research suggests that treating gum disease and other stroke risk factors could reduce the severity of artery plaque buildup and narrowing of brain blood vessels, which can lead to a stroke.

"It's important for clinicians to recognize that gum disease is an important source of inflammation for their patients and to work with patients to address gum disease," Sen said. "We are working on a current study to evaluate if treatment of gum disease can reduce its association with stroke."

Treating gum disease varies depending on the nature and severity of the problem, according to the National Institute of Dental and Craniofacial Research, or NIDCR, the U.S. government's primary agency for research on dental, oral, and craniofacial health and diseases. The focus of the treatment is to control the infection.

Symptoms of gum disease include bad breath that won't go away, red or swollen gums, tender or bleeding gums, painful chewing, loose teeth, sensitive teeth, and receding gums or longer appearing teeth, according to the NIDCR.

"Any type of treatment requires that the patient keep up good daily care at home," according to NIDCR. "The dentist may also suggest changing certain behaviors, such as quitting smoking, as a way to improve your treatment results."

Sen, a professor at the University of South Carolina School of Medicine, and the studies' other authors are scheduled to present their findings at the American Stroke Association's International Stroke Conference in Los Angeles next week.