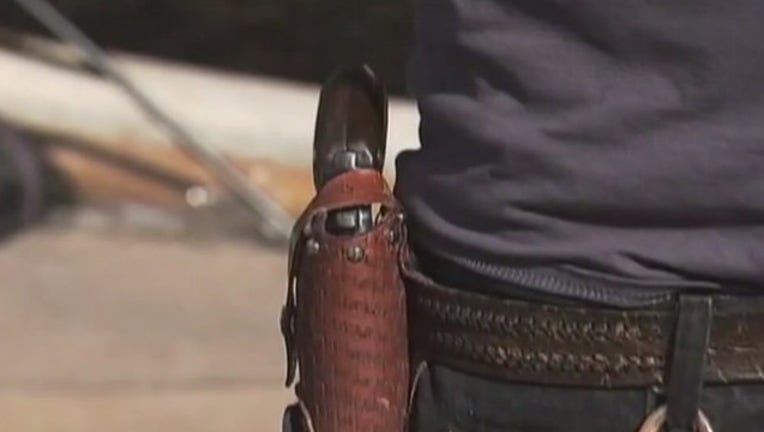 AUSTIN, Texas (AP) - Lawmakers in Texas have quietly gone around the National Rifle Association by slipping language into a massive spending bill that would fund a $1 million public safety campaign on gun storage.

The last-minute move late Sunday sets up a political test rarely seen in Texas for Republican Gov. Greg Abbott, who must decide whether to veto the spending or to ignore NRA opposition and approve the program.

An Abbott spokesman did not immediately respond to a request for comment, and the Texas Legislature was set to adjourn Monday.

The campaign for safe home gun storage is a small item in the two-year, $250 billion state budget, and it was fiercely opposed by the NRA and gun-rights activists. The measure failed to get a vote and appeared all but dead weeks ago.

Then budget negotiators -- the majority of whom are Republicans -- added the funding into a budget bill. The legislation was approved Sunday night by the GOP-controlled Legislature.

"I have full confidence that the governor will look at it hard and will realize it's all about saving lives. I hope there is no one discouraging him," Gyl Switzer, executive director of Texas Gun Sense, said Monday.

Abbott has said he would support promoting gun safety. But he has also bowed to pressure from the NRA and gun rights advocates on issues such as stiffer penalties for negligent gun storage, as well as "red flag" laws to keep guns away from people deemed dangerous to themselves or others.

Creating a new safe storage campaign in Texas would be a rare defeat for the NRA, which has long flexed considerable muscle in a state with more than 1.3 million handgun license holders.

Texas lawmakers have steadily expanded gun rights over the last decade. That includes a Sunday night vote to allow anyone who can legally own a gun to carry it openly or concealed for a week after a natural disaster declaration.

The NRA and its state affiliate, the Texas State Rifle Association, have worked to beat back new restrictions on gun ownership, including after two recent high-profile mass shootings: one at a church in Sutherland Springs in November 2017 that killed more than two dozen people, including a pregnant woman, and a shooting at Santa Fe High School near Houston that killed 10 people and wounded 13 others in May 2018.

The proposal for a safe gun storage public service campaign came after the Santa Fe High School shooting. Police have said the then-17-year-old gunman took his father's weapons from their home.

After the Santa Fe shooting, Abbott's gun law proposals said he wanted "to encourage the millions of law abiding, gun-owning Texans to embrace their personal responsibility for gun safety."

Bills filed by Democrats to have the Texas state police agency create a safe storage campaign never made it to votes in the House or Senate. The NRA lobbied against them, arguing that gun rights groups and gun manufacturers have similar campaigns that are widely distributed to gun stores and shooting ranges. In one public hearing, an NRA lobbyist warned lawmakers that a campaign designed by the Texas state police could easily be corrupted by anti-gun rhetoric.

Abbott has line-item veto power in the budget, meaning he could strip out the safe storage campaign without scuttling the entire spending bill.

Alice Tripp, legislative director and lobbyist for the Texas State Rifle Association, said the group still opposes the program but isn't in the business of asking for veto.

"We don't do that. Gov. Abbott does not need that kind of advice from us. We bring information to the table," Tripp said. "If he calls me, I would tell him that."

Advocates for the safe-storage campaign say it's needed far beyond efforts to stop mass shootings.

Nationwide, nearly 1,700 children under age 18 died from accidental gun deaths from 2001 to 2017, while more than 33,000 were injured, according to the federal Centers for Disease Control and Prevention. A University of Texas study of pediatric shooting injuries or deaths over a 15-year period in Houston found that in most cases, there was no adult supervision at the time and most families had received no training on safe gun storage at home.