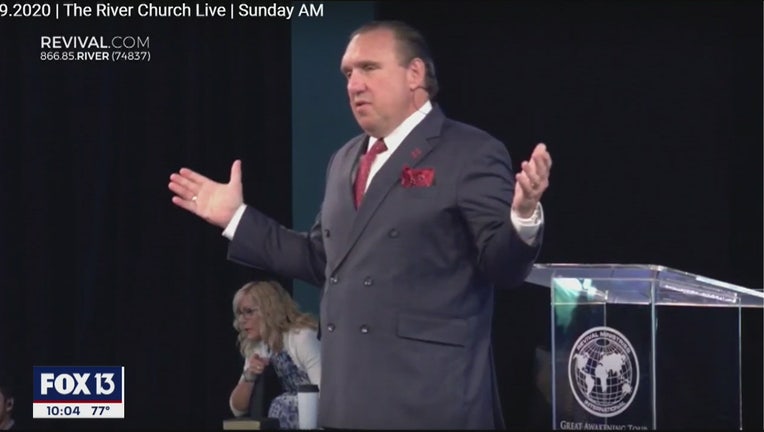 TAMPA, Fla. - The pastor of a Tampa megachurch is facing charges after refusing to close its doors despite a "safer at home" order in effect in Hillsborough County, meant to stop the spread of COVID-19. The sheriff says up to 500 people were in attendance at Pastor Rodney Howard-Browne's Sunday services.

Howard-Browne, 58, turned himself in Monday afternoon after Sheriff Chad Chronister and State Attorney Andrew Warren on Monday announced an arrest warrant had been issued for charges of unlawful assembly and violating public health emergency rules of isolation and quarantine. Howard-Browne was released 40 minutes later after posting a $500 bond.

Friday, Sheriff Chronister said, deputies had tried to speak to Howard-Browne on at least two separate occasions about the "dangerous environment" the church was creating. He said HCSO command staff went to the east Tampa church, but they were advised by church leaders and legal staff that Howard-Browne was refusing to see them and also refusing to cancel the Sunday church services.

Hillsborough County's sheriff joins State Attorney Andrew Warren and local religious leaders to announce the arrest warrant for a local pastor who led packed services on Sunday, despite orders not to.

"His reckless disregard for human life put hundreds of people in his congregation at risk and thousands of residents who may interact with them this week in danger," Sheriff Chad Chronister said at a press conference Monday afternoon. "They have access to technology allowing them to live stream their services over the internet and broadcast to their 400 members from the safety of their own homes, but instead they chose to gather at church.”

Chronister stressed that the warrant was not an attack on religious freedom and noted there are other Tampa Bay-area churches who are following the social distancing guidelines set by the CDC. He said his concern now is whether the novel coronavirus may spread following the crowded services.

"I was appalled and also frightened at the fact that those individuals [were] thinking and believing they are doing the right thing. How many people are they going to infect if they have COVID-19?" Chronister asked. "There is nothing more important than faith especially during a pandemic, but like every other church here in the Bay Area, do it responsibly."

“I think it’s unfortunate that the pastor here is hiding behind the First Amendment," State Attorney Warren offered. "One, it’s absolutely clear that emergency orders like this are constitutional and valid. Second of all, leaders from our faith-based community across this country have embraced the importance of social distancing.” 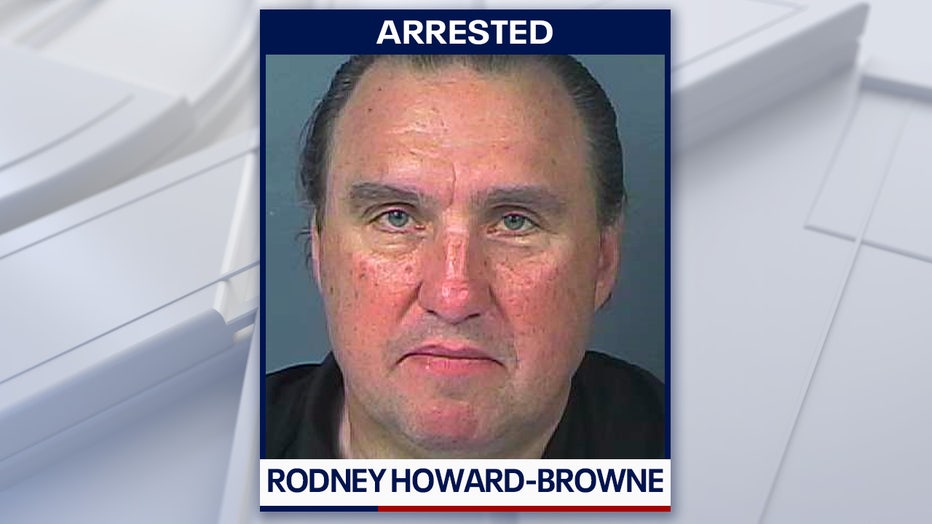 "This is a hard adjustment for people to make but I think we have to make that adjustment," said Jeremy Dys, First Liberty Institute's Special Counsel for Litigation and Communications. "The state has to have a compelling justification, a compelling reason to say we are going to ask people of a certain size or gathering to stop meeting for a period of time temporarily."

Dys said the key is that the restrictions are only enforced temporarily and that religious institutions are not unfairly targeted. First Liberty Institute is encouraging religious leaders to continue finding creative ways to serve their communities online, in small groups, or drive-thru-type events.

"Let's figure out the best way we can go and work together to preserve religious liberty on the one side but also maintain the public health on the other side of things," Dys said. "Those two can work together. They don't have to work apart." 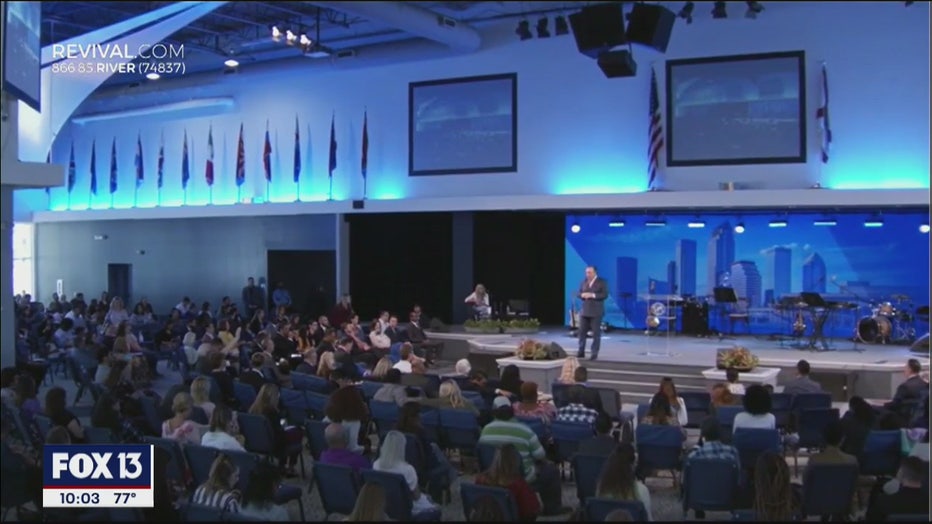 During Chronister’s announcement of the arrest warrant, other leaders from local churches also joined him. Pastor Ken Whitten from Idlewild Baptist Church pointed out that quarantining is mentioned in the Bible.

"It was practiced by people," he said. "The issue here is not religious freedom. Churches are not the ones being singled out. Everything is shut down. There is no basketball. There is no hockey. All of us our doing our part. I'm a pastor that believes God heals…this is not a faith issue. This is a responsible friend issue."

Reverend Thomas Scott of 34th Street Church, a former chairman of the Board of County Commissioners and Tampa City Council member, said his church began streaming online and on Facebook.

RELATED: Coronavirus cases in Florida increase by 500 to over 5,000

"We value the importance of the laws of the land and we value the importance of social distancing, and more importantly, protecting our parishioners -- make sure they are not in harm's way and spreading this deadly disease throughout the community," he said. " To us, COVID-19 and social distancing is very important. It's also important for the religious community to govern themselves, according to the laws of the land."

Chronister and Warren also appealed to River parishioners, asking them not to gather in their pastor's absence. The state attorney even quoted Mark 12:31 in making his point.

“There is no more important commandment than to love thy neighbor as thyself,” Warren preached. “Loving thy neighbors is protecting them, not jeopardizing their health by exposing them to this deadly virus.”

On Sunday, Howard-Browne defended his decision to keep the church open in a video posted to his YouTube channel, claiming the building had the technology to eradicate any virus.

"We brought in 13 machines that basically kill every virus in the place," Howard-Browne said. "If they sneeze it shoots it down like at 100 miles per hour and it will neutralize it in a split second."

The church also wrote the following statement on their website:

"We feel that it would be wrong for us to close our doors on them, at this time, or any time. In a time of crisis, people are fearful and in need of comfort and community."

Howard-Browne’s attorney took issue with the Hillsborough County “safer at home” order and the charges brought against his client, adding the county allows companies like Amazon to operate while shutting down churches.

We're now hearing from the attorney of the Tampa pastor who was arrested, as well as from a constitutional professor about the validity of the order.

“Not only did the church comply with the administrative order regarding six-foot distancing, it went above and beyond any other business to ensure the health and safety of the people," insisted Liberty Counsel founder and chairman Mat Staver. "Contrary to Sheriff Chronister’s allegation that Pastor Howard-Browne was ‘reckless,'” the actions of Hillsborough Country and the Hernando County Sheriff are discriminatory against religion and church gatherings.”

“This church has a concern, not only for the physical wellbeing of its participants and the community but also the spiritual wellbeing and that's what this church has been trying to do," Staver said. "They bought $100,000 worth of hospital-grade equipment they have established throughout the church that kills microbes including in the family of the coronavirus."

Staver said the arrest is discriminatory and the county's order is being unconstitutionally applied to the church.

"You cannot look at this situation and say it's being evenly enforced across the board to these other businesses," Staver said.

We asked Staver whether the church had any plans for future services following Monday's arrest. Staver said he's still working with the pastor to plan their next steps.

If you feel sick:

The Florida Department of Health has opened a COVID-19 Call Center at 1-866-779-6121. Agents will answer questions around the clock. Questions may also be emailed to covid-19@flhealth.gov. Email responses will be sent during call center hours.

CORONAVIRUS IN FLORIDA: What you need to know

AROUND THE WORLD: CoronavirusNOW.com 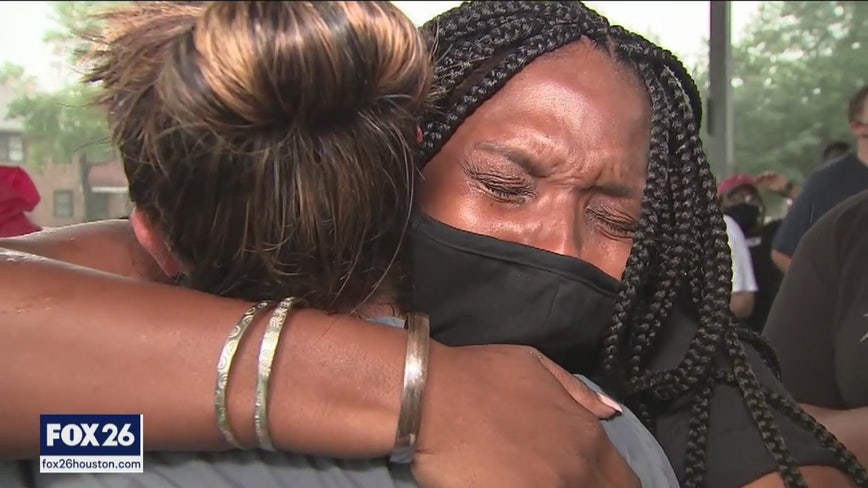