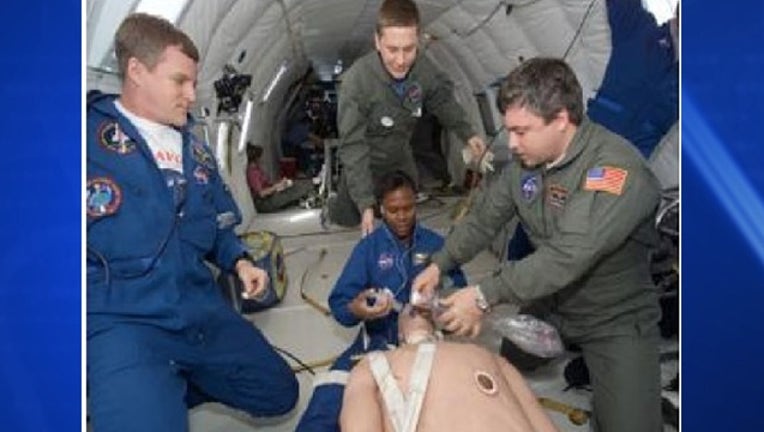 RICHMOND, Va (AP) - RICHMOND, Va. (AP) - Space flight has been a lifelong passion for Dr. C. Marsh Cuttino. As a child growing up in Richmond, he had ambitions of becoming an astronaut.

"I have always been interested in space. I am a classic child of the Apollo era," said Cuttino, referring to the NASA program that sent humans to the moon in the late 1960s and early 1970s.

Cuttino became a medical doctor specializing in emergency medicine, but his fascination with space flight has played an important role in his career.

He is the founder of Orbital Medicine Inc., a startup that provides medical consulting for space flight and develops tools to treat medical conditions that astronauts could suffer in space.

"My vision is to be the medical provider for commercial space flight operations," he said.

One of the company's inventions, the Evolved Medical Microgravity Suction Device, is designed to treat a collapsed lung during space flight.

"A collapsed lung is a high-impact injury that has a significant risk of occurring on long-duration space flight," Cuttino said. "It is life-threatening, but it is easy to treat on Earth with the right tools."

However, those tools are dependent on gravity to function properly. "In zero gravity, that won't work," Cuttino said.

Under a research grant from NASA, Cuttino pulled together a team of physicians and aerospace engineers to develop the device, which is designed to work in microgravity, creating suction to continuously inflate the lung and collecting blood that can be transfused into an injured astronaut.

The company has been testing the device on suborbital space flights conducted by Blue Origin LLC, the private aerospace company formed by Jeff Bezos, the founder of internet retail giant Amazon.

The device has been sent into suborbital flight twice, first on a Blue Origin flight in late 2017 and more recently on a flight earlier this year.

"We developed a collapsible version," of the device, to make it more efficient for space flight, Cuttino said.

Cuttino brings to his work a lengthy background in emergency medicine and space flight research.

After attending medical school at Virginia Commonwealth University, Cuttino did his residency in emergency medicine at the University of Florida, which enabled him to work at NASA from 1995 to 1998 as part of a medical support team for astronauts in the space shuttle program.

"There are a lot of challenges in taking care of an astronaut right after landing, and if they have been in space for a long time, because your physiology changes in space," Cuttino said.

In developing the treatment tool for a collapsed lung, Cuttino drew on his experience in parabolic flights, which are flights on specialized aircraft that NASA uses to re-create the conditions of low gravity for training astronauts and conducting experiments.

Parabolic flights have been famously referred to as the "vomit comet" because they can induce motion sickness among passengers.

"I have never gotten sick, which is one of the strengths that got me invited on a lot of flights as an experimenter," Cuttino said. "When you are doing these research programs, if your team gets sick, you can't complete the research."

Cuttino's experience flying on the vomit comet multiple times "has given me insight into what types of things work and what don't work," he said.

He would like to see space missions that return to the moon or even go to Mars. He wants to develop medical tools and processes that can be useful on such missions or that can be used on the International Space Station.

Cuttino said he has a list of devices in mind.

"Two of them are submitted now for grants," he said. "One of my next ones is targeted for lunar exploration, for conditions that are difficult to treat in remote and extreme environments."