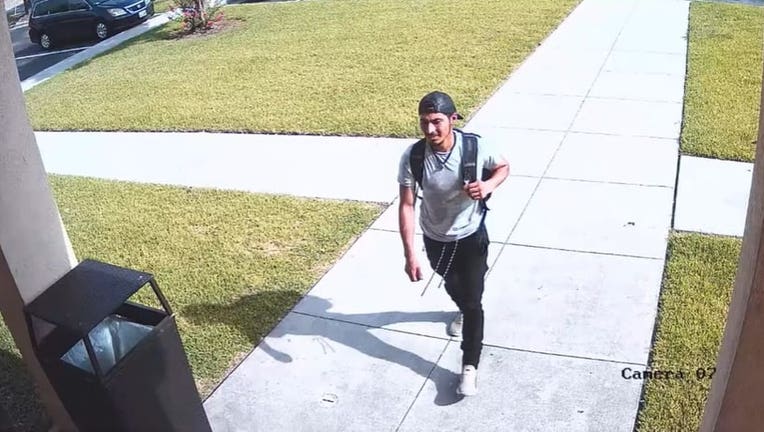 HOUSTON - The Houston Police Department is asking for help identifying a man involved in the aggravated robbery of a hotel guest and security guard in north Houston.

On June 8 around 5 p.m., a hotel guest was approached by a man while walking his dog outside a hotel on the 16500 block of Hedgecroft Drive. Police said the man started talking to the guest and told him that he was "laying low for a while."

Authorities said as the guest walked back into his hotel, the man followed him from a distance. As he was unlocking his room, the man ran up with a gun and demanded the guest go into the room.

Inside the room, the guest was reportedly restrained with duct tape. The man went through the guest’s belongings, taking his valuable items. He then fled the hotel in an unknown direction.

The following evening, on June 9 around 9 p.m., the same man was seen on security footage entering a grocery store, located on the 500 block of Greens Road, about two miles from the hotel.

Officials said he walked down an aisle of the store and attempted to steal a drink. As he was walking out, the security guard stopped him, and told him he had to pay for it. The two exchanged words and the man walked out of the store to a nearby tree to sit down.

The security guard reportedly walked up to him and pulled out his phone to get a picture.

Authorities said the man pulled out a gun and threatened to kill the security guard. He grabbed the cell phone from the guard’s hand and ran from the location.

Police described the man as a Hispanic male, with medium skin, and brown eyes. He’s approximately 20-25 years old, around 5’7" to 5’8" tall, has a skinny build, and walked with a limp. He was last seen wearing a black ball cap with an American flag skull and cross bones.

Information leading to the charging or arrest of any felony suspects may result in a cash payment of up to $5,000. Crime Stoppers asks that you contact them directly if you have any information related to this investigation to remain anonymous and to be considered for a cash payment. You can call them at 713-222-TIPS or submit a tip online or through the Crime Stoppers mobile app.