U.S. Supreme Court Justice Ruth Bader Ginsburg, died at 87 of metastatic pancreatic cancer, according to the Associated Press. She was the oldest sitting member on the court.

"What's not to like?" Scalia said of Ginsburg at a joint appearance about six years ago. "Except her views on the law."

The genuine friendship between the liberal Ginsburg and conservative Justice Antonin Scalia, who died in 2016, puzzled many audiences. Ginsburg explained: “The number one reason why I loved Justice Scalia so is he made me laugh.” 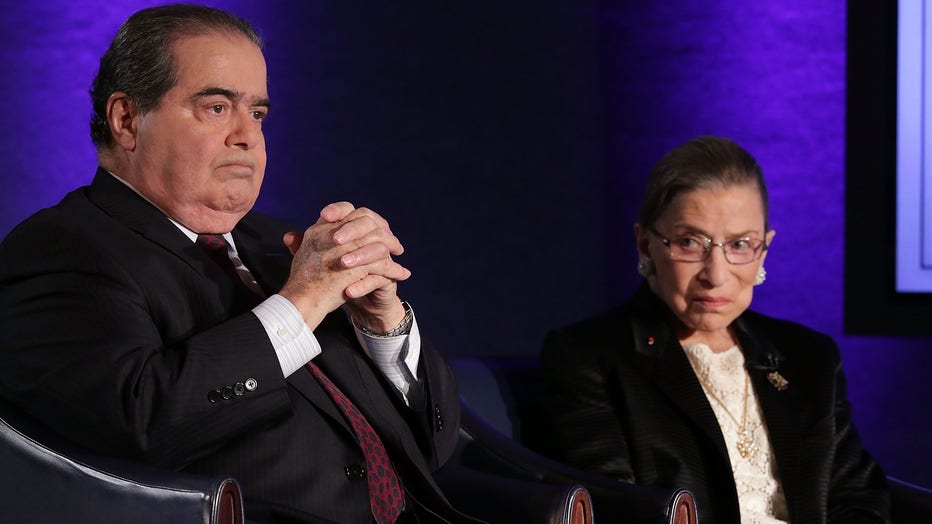 WASHINGTON, DC - APRIL 17: Supreme Court Justices Antonin Scalia (L) and Ruth Bader Ginsburg (R) wait for the beginning of the taping of "The Kalb Report" April 17, 2014 at the National Press Club in Washington, DC. The Kalb Report is a discussion of

The pair were both New Yorkers; Ginsburg grew up in Brooklyn and Scalia in Queens. The two shared a love of opera. And they were close enough that their families spent New Year’s together. Scalia would sometimes call to point out grammar errors in Ginsburg’s opinion drafts. Ginsburg, for her part, would sometimes tell him: “This opinion is so overheated, you’d be more persuasive if you tone it down.” She liked to say: “He never listened to that.”

RELATED: Trump calls Ruth Bader Ginsburg ‘an amazing woman,’ Biden says she ‘stood for all of us’

According to FOX News, Ginsburg watched Antonin Scalia speak to the American Bar Association and recalled in 2014, "he said it in an absolutely captivating way."

Ginsburg often described a famous picture of the two of them riding an elephant together in India, the heavyset Scalia in front and diminutive Ginsburg in the rear. Ginsburg’s feminist friends were horrified. Why was she in the back? Weight distribution, she explained.

Joe Biden speaks on the death of Ruth Bader Ginsburg

Democratic nominee Joe Biden, returning to Delaware from his own campaign stop in Minnesota, praised Ginsburg upon his arrival.

Scalia’s son Chris Scalia told FOX News Tuesday, “I kind of hope it serves as a model for us especially in what are sure to be pretty tense months ahead that we can remain friends, good friends with people who see the world very differently from us, as long as we stay focused on, without giving up our principles or what is really important to us, recognizing that we have other things in common, there are other things to share with each other and we still value those friendships and cherish them.”

Their bond was cemented at the U.S. Court of Appeals for the District of Columbia Circuit, where Ginsburg served there from 1980-93, Scalia from 1982-86.

President Donald Trump on Sept. 9, 2020 announced 20 names being added to the list of Supreme Court candidates that he’s pledged to choose from if he has future vacancies to fill.

“Occasionally he [Scalia] sided with Justice Ginsburg, especially on occasions that dealt with the rights of the accused and issues of police search and seizure, and I think that to a large degree kind of Americans expect that of their Justices, to not kind of just support the side of the president who appointed them,” Chris Scalia noted.

Chris Scalia said when his father and Ginsburg disagreed with each other their opinions were made very clear. “It wasn’t personal though. They attacked each other’s ideas, and I think that’s how they were able to maintain that friendship despite all the disagreement.”FOX News and Stephanie Weaver contributed to this story.