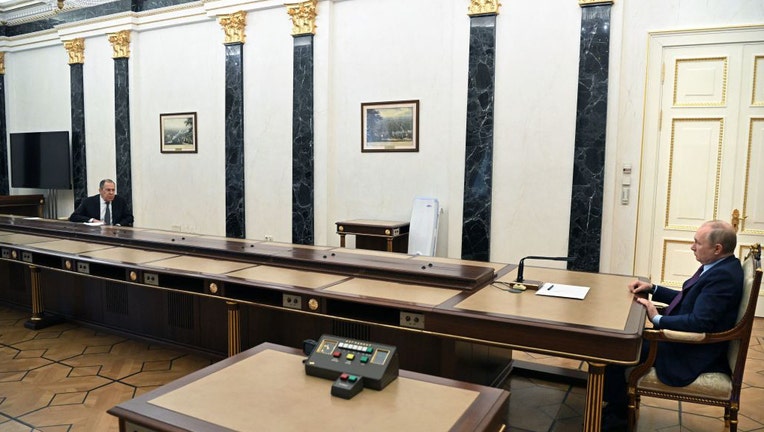 Russia’s top diplomat advised President Vladimir Putin on Monday to keep talking with the West on Moscow’s security demands, a signal from the Kremlin that it intends to continue diplomatic efforts amid U.S. warnings of an imminent Russian invasion of Ukraine.

Moscow wants guarantees from the West that NATO won’t allow Ukraine and other former Soviet countries to join as members, and that the alliance will halt weapons deployments to Ukraine and roll back its forces from Eastern Europe, the demands flatly rejected by the West.

Speaking at a meeting with Putin, Foreign Minister Sergey Lavrov argued that Moscow should hold more talks with the U.S. and its allies despite their refusal to consider the main Russian demands.

The talks "can’t go on indefinitely, but I would suggest to continue and expand them at this stage," Lavrov said, noting that Washington has offered to conduct dialogue on limits for missile deployments in Europe, restrictions on military drills and other confidence-building measures.

Asked by Putin if it made sense to continue diplomatic efforts, Lavrov responded that possibilities for talks "are far from being exhausted," and he proposed to continue the negotiations.

Putin noted the West could try to draw Russia into "endless talks" without conclusive results and questioned whether there is still a chance to reach agreement on Moscow's key demands.

"There's always a chance," Lavrov replied, adding that his ministry wouldn't allow the U.S. and its allies to stonewall Russia's main requests.

Moscow denies it has any plans to invade Ukraine but has massed well over 130,000 troops near its borders and, in the U.S. view, has built up enough firepower to launch an attack on short notice.

The meeting came as German Chancellor Olaf Scholz visited Ukraine and plans to continue on to Moscow for talks with Putin in a last-ditch diplomatic effort.

"We are experiencing a very, very serious threat to peace in Europe," Scholz tweeted from Kyiv, adding that Germany wanted to see "signals of de-escalation" from Moscow.

British Prime Minister Boris Johnson said Europe is "on the edge of a precipice," adding that "there is still time for President Putin to step back."

With concerns rising that war could be imminent, German's military said the first of some 350 extra troops it is sending to bolster NATO forces in Lithuania were dispatched Monday. Lithuania moved diplomats’ families and some nonessential diplomatic workers out of Ukraine after the U.S. and others pulled most of their staff from embassies in Kyiv.

Residents of the Ukrainian capital received letters from the mayor calling on them "to defend your city," and signs appeared in the elevators of apartment buildings indicating the nearest bomb shelter. The mayor says Kyiv has about 4,500 such sites, including underground parking garages, subway stations and basements.

Dr. Tamara Ugrich said she stocked up on grains and canned food, and has prepared an emergency suitcase.

"I don’t believe in war, but on TV the tension is growing every day and it’s getting harder and harder to keep calm. The more we are told not to panic, the more nervous people become," she said.

But others heeded advice of Ukraine's leaders not to panic. Street music flooded central Maidan Square on Sunday night and crowds stopped to dance. "I feel calm. You should always be ready for everything, and then you will have nothing to be afraid of," said Alona Buznitskaya, a model.

Some airlines canceled flights to Kyiv and troops unloaded new shipments of weapons from NATO members.

The U.S. and its NATO allies have repeatedly warned that Russia will pay a high price for any invasion — but they have sometimes struggled to present a united front. Scholz's government, in particular, has been criticized for refusing to supply lethal weapons to Ukraine or to spell out which sanctions it would support against Russia, raising questions about Berlin’s resolve to stand up to Moscow.

So far, NATO's warnings appear to have had little effect: Russia has only bolstered troops and weapons in the region and launched massive drills in its ally Belarus, which also neighbors Ukraine. The West fears that the drills, which will run through Sunday, could be used by Moscow as a cover for an invasion from the north.

Russia has repeatedly brushed off Ukrainian and Western concerns about the military buildup, saying it has the right to deploy forces wherever needed on its territory.

With hopes for a diplomatic exit path fading and no big expectations from Scholz’ trip, Ukraine’s ambassador to the U.K., Vadym Prystaiko, pointed at a possibility of Ukraine shelving its NATO bid— an objective that is written into its constitution — if it would avert war with Russia.

"We might — especially being threatened like that, blackmailed by that, and pushed to it," Prystaiko told BBC Radio 5.

On Monday, however, Prystaiko appeared to back away from that, saying that "to avoid war we are ready for many concessions ... but it has nothing to do with NATO, which is enshrined in the constitution."

Asked about Prystaiko's comment, Kremlin spokesman Dmitry Peskov said that Russia would welcome such a move but noted the quick repudation of it by the Ukrainian Foreign Ministry.

Ukrainian parliament speaker Ruslan Stefanchuk also emphasized that there was no talk about revising the constitutional provision that refers to NATO membership, and some lawmakers called for Prystaiko's dismissal.

Meanwhile, Ukrainian Foreign Minister Dmytro Kuleba said Sunday that Kyiv requested a meeting of the Organization for Security and Cooperation in Europe in the next 48 hours to discuss the Russian deployments near the country’s borders.

Poland, which currently chairs the OSCE, said the meeting is scheduled for Tuesday — but it is unlikely to defuse tensions.

Some members of the OSCE mission in eastern Ukraine that observers a shaky cease-fire in the region have pulled out amid war fears, and Russia-backed separatists have alleged that their departure could facilitate provocations.

With the region on edge, the Russian Defense Ministry summoned the U.S. Embassy’s military attache Saturday to protest what it said was a U.S. submarine in Russian waters near the Kuril Islands in the Pacific. Russia said the submarine initially ignored orders to leave, but left after the navy used unspecified "appropriate means." The U.S. has denied its ship ever entered Russian waters.

Asked by lawmakers Monday if the military could strike foreign warships that enter Russian waters, deputy chief of the Russian military's General Staff Stanislav Gadzhimagomedov said it stands ready for it, but added such decisions are only made at the highest level.

In Sunday's call, U.S. President Joe Biden and Ukrainian President Volodymyr Zelenskyy agreed to keep pushing both deterrence and diplomacy. Zelenskyy's office also quoted him suggesting that a quick Biden visit would help deescalate the situation — a possibility that was not mentioned in the White House summary of the call.

Russia and Ukraine have been locked in a bitter conflict since 2014, when Ukraine’s Kremlin-friendly leader was driven from office by a popular uprising. Moscow responded by annexing the Crimean Peninsula and then backing a separatist insurgency in eastern Ukraine, where fighting has killed over 14,000 people.

A 2015 peace deal brokered by France and Germany helped halt large-scale battles, but regular skirmishes have continued, and efforts to reach a political settlement have stalled.