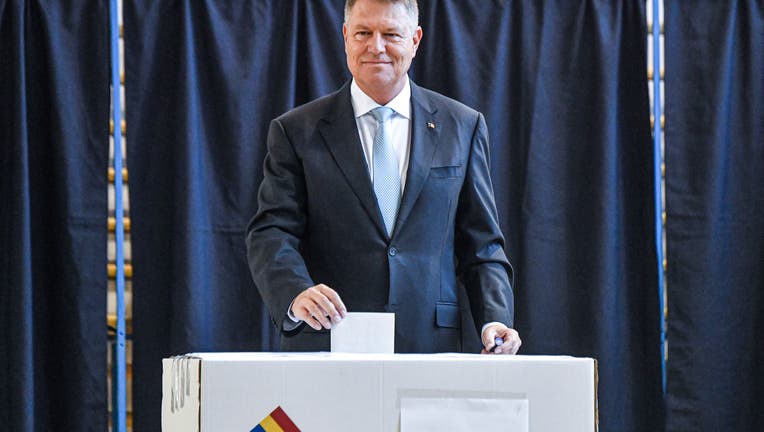 Romanian President Klaus Iohannis casts his ballot at a polling station, in Bucharest, on November 10, 2019. -. (Photo by DANIEL MIHAILESCU/AFP via Getty Images)

BUCHAREST, Romania (AP) — Romania was holding a presidential election Sunday after a lackluster campaign that has been overshadowed by the country's political crisis, which saw a minority government installed just a few days ago.

Around 18.2 million voters are eligible to cast ballots for one of 14 candidates vying for the five-year presidential term.

Recent polls suggest the incumbent, Klaus Iohannis, is set to win the most votes. He is trailed by center-left candidate Viorica Dancila, who until last month was Romania's prime minister; independent Mircea Diaconu, a former actor and theater director; and Dan Barna, head of the country's third largest party, the center-right Save Romania Union.

If no candidate wins more than 50% of the vote, there will be a second round of voting on Nov. 24.

A member of the European Union since 2007, Romania has been struggling to contain its state budget deficit, which is projected to reach 4.4% of GDP next year, well above the EU limit of 3%. Poverty is also widespread. According to a World Bank study last year, over 25% of Romania's people live on less than $5.50 a day.

Over the past three years, as Romania has had four prime ministers and endured massive anti-corruption protests, Iohannis has cultivated the image of a staunchly pro-European leader and a calming influence.

Iohannis is a former leader of the National Liberal Party, which last week formed a minority government led by Prime Minister Ludovic Orban.

While lacking an executive role, Romania's president has significant decision-making powers, including on matters of national security and foreign policy, and can reject party nominees for the prime minister and government nominees for judicial appointments.

"I hope to get confirmation today that many Romanians share my wish . for a normal Romania," Iohannis said after casting his ballot in Bucharest.

Dancila's Social Democrat government was ousted last month after losing a no-confidence vote in parliament amid corruption scandals and allegations that it wanted close control over the judiciary. However, she has tried to cast herself as a social reformer.

"I voted against austerity, against the cutting of pensions and salaries . (for) a Romania where citizens do not fear tomorrow," Dancila said after voting Sunday.

For his part, Barna hoped to tap into the widespread disillusionment caused by government corruption scandals.

"I think Romanians understand what is at stake," Barna said. "This is a vote for the future."

With nearly a quarter of its 20 million people living abroad, Romania faces an increased labor shortage and a widespread disappointment among its youth with the current political elite.