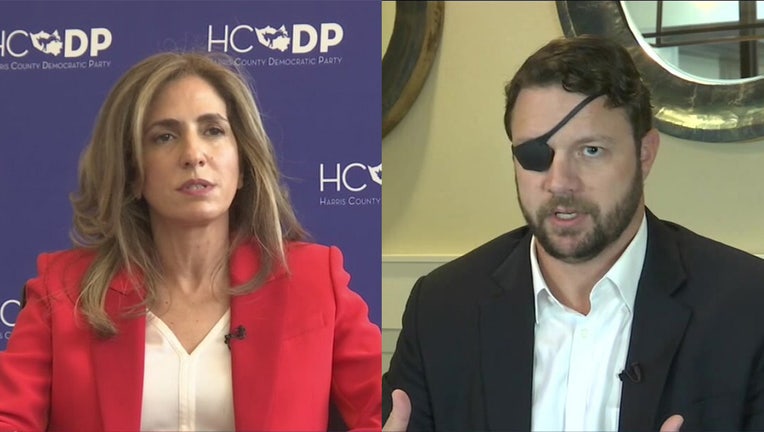 Rep. Crenshaw won the re-election by more than 13 percentage points.

Libertarian Elliot Scheirman was also running for the congressional seat.

One on one with Congressman Dan Crenshaw

Greg Groogan talks one on one with Congressman Dan Crenshaw (R TX2) about the economy, COVID-19 and his opponent Sima Ladjevardian.

Rep. Crenshaw is a former Navy SEAL who won the election to replace Rep. Ted Poe in 2018.

As part of SEAL Team Three, Crenshaw was deployed five times, including to Iraq, Afghanistan, and South Korea. During his third deployment, he was severely wounded, leaving him blind in his right eye. After recovering, he was deployed two more times before retiring after 10 years. He left service with many awards, including a Purple Heart and the Navy Commendation Medal with Valor.

Crenshaw was elected into Congress as a conservative without any previous political experience. He currently serves on the House Homeland Security and House Budget Committees.

According to his campaign, his priorities include “flooding, border security, human trafficking, and fiscally responsible spending.”

Sima Ladjevardian , Democratic candidate for U.S. Representative for District 2 talks one on one with Greg Groogan about her platform and the important needs of the community.

Ladjevardian is an attorney, breast cancer survivor, and political activist, who immigrated to the U.S. from Iran when she was a child.

As a Democratic political strategist, she has worked with several candidates. Ladjevardian was the Senior Advisor and Finance Chair to Beto O’Rourke during his 2018 U.S. Senate race and 2020 presidential run.

Texas’ 2nd District has a population of 721,185 as of the 2010 Census. It is located entirely within Harris County. Since the redistricting process of 2012, the district now includes Kingwood, Humble, and Atascocita in northeastern Harris County. The district curves west and south toward the center of Houston. It passes through Memorial Park and goes south through Montrose, Rice Village, and parts of Braeswood.

The district flipped in 2004, after Republican Ted Poe defeated four-term Democrat Nick Lampson. Poe represented the district until his retirement in 2019. Republican Dan Crenshaw won the 2018 election and is currently the district's Representative.

It is trending a bit Democrat as seen over past political cycles. According to a Daily Kos elections report, the district voted for Republican Mitt Romney in 2012 by a margin of 27 points, and voted for President Trump in 2016 by a margin of just nine points. However, the district was the only one in the Houston-area to vote for Pres. Trump.

Can Democrats seize control of the Texas House?