DAVOS, Switzerland - President Donald Trump sought Tuesday to sell the United States to the global business community, telling an economic conference in the Swiss Alps that America's economic turnaround has been “nothing short of spectacular.”

Trump addressed the annual World Economic Forum in Davos, Switzerland, hours before his historic impeachment trial was to reconvene in the U.S. Senate in Washington.

Trump reminded the audience that when he spoke here two years ago, early in his presidency, “I told you that we had launched the great American comeback." 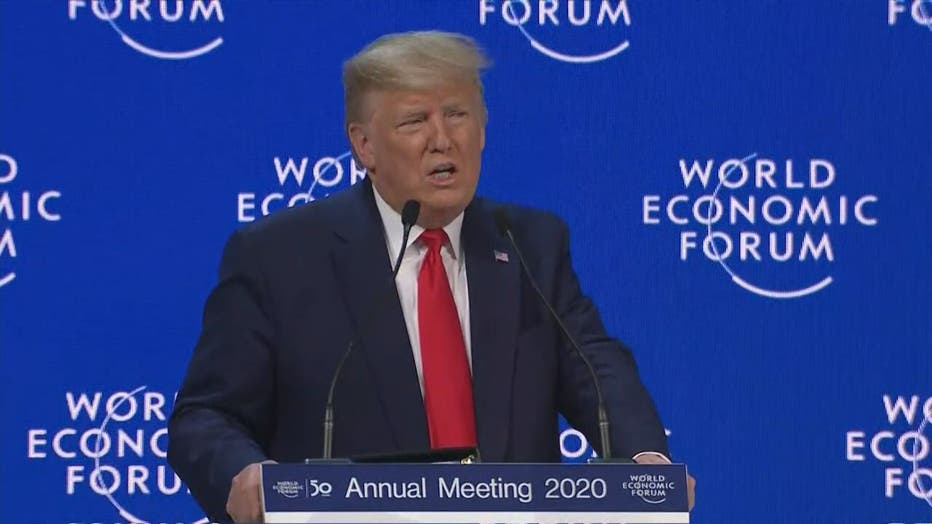 “Today I’m proud to declare the United States is in the midst of an economic boom, the likes of which the world has never seen before,” the president said.

Trump's participation in the annual gathering of political and business elites in the Alpine ski resort will provide a conspicuous split-screen moment in a presidency familiar with them. The two-day Swiss visit will test Trump's ability to balance his anger over being impeached with a desire to project leadership on the world stage.

Speculation had mounted that Trump would cancel the trip due to the Senate trial, but aides said he remains focused on producing results for the American people.

Climate issues were to be a main theme at the forum and “Act on Climate” was written in the snow at the landing zone where Trump's Marine One helicopter set down in Davos. Trump, however, said he was attending the forum to encourage businesses to invest in the U.S.

“America is thriving. America is flourishing and yes, America is winning again like never before,” Trump said before talking about a newly signed trade deal with China and a pending trade agreement with Mexico and Canada.

Trump planned to meet with world leaders and business executives after the speech.

Swooping in for his second appearance at the conference, Trump was set to depart on Wednesday, jetting back to Washington, which is consumed by the impeachment trial.

The Democratic-controlled House impeached the Republican president last month for abuse of power and obstruction of Congress after it was revealed that he had pressed Ukraine’s president to announce investigations into former Vice President Joe Biden, a Democrat and a Trump political rival. Trump withheld foreign aid that Congress had approved for the Eastern European nation and dangled the prospect of an Oval Office meeting as leverage. 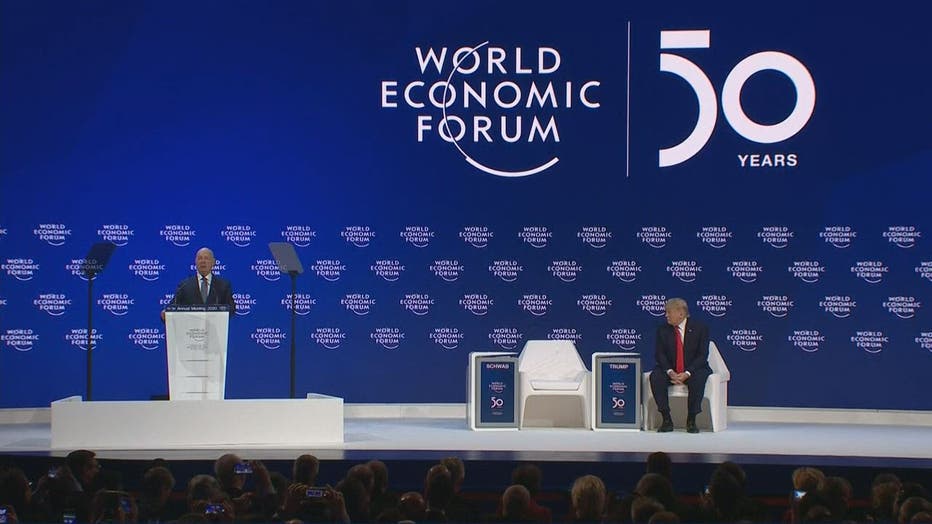 Trump denies any wrongdoing and argues that Democrats want to remove him from office because they know they can’t deny him reelection in November. Trump would be forced to leave office if convicted, but the Republican-controlled Senate is expected to acquit him.

Trump said he would attend the Davos forum despite the awkward timing because he wants to encourage businesses to come back to the U.S.

“Our country is the hottest country anywhere in the world,” he said at the White House last week. "There's nothing even close. I’ll be meeting the biggest business leaders in the world, getting them to come here.”

The White House has not named any of the business leaders Trump is set to meet with. But he is scheduled to hold talks Tuesday and Wednesday with the leaders of Iraq, Pakistan, Switzerland and Iraq's self-governing Kurdish region, as well as the forum's founder, the White House said.

Trump also will have his first meeting with the new European Commission president, Ursula von der Leyen, the first woman to hold the position.

That meeting could be the most significant, said analyst Matt Goodman, given Trump’s many disagreements with Europe over tax and trade policy, like a new digital levy by the French that will force American tech giants such as Amazon and Google to pay up.

“She's new and she's formidable,” said Goodman, who studies international economic policy as a senior vice president at the Center for Strategic and International Studies in Washington.

He predicted a difficult year ahead for U.S.-EU relations.

Trump has smarted over the French tax, and his administration has announced plans to impose retaliatory tariffs of up to 100% on cheese, wine, lipstick and other French imports. France has threatened to fight back.

But after speaking to Trump on Monday, French President Emmanuel Macron tweeted that they had a “great discussion” about the digital tax and “will work together on a good agreement to avoid tariff escalation.” Trump later retweeted Macron, adding the word: ”Excellent!"

The U.S. has also threatened to impose retaliatory duties on $7.5 billion worth of European airplanes, cheese, wine and other goods in a separate dispute over subsidies for Airbus, a competitor to Chicago-based Boeing Co. 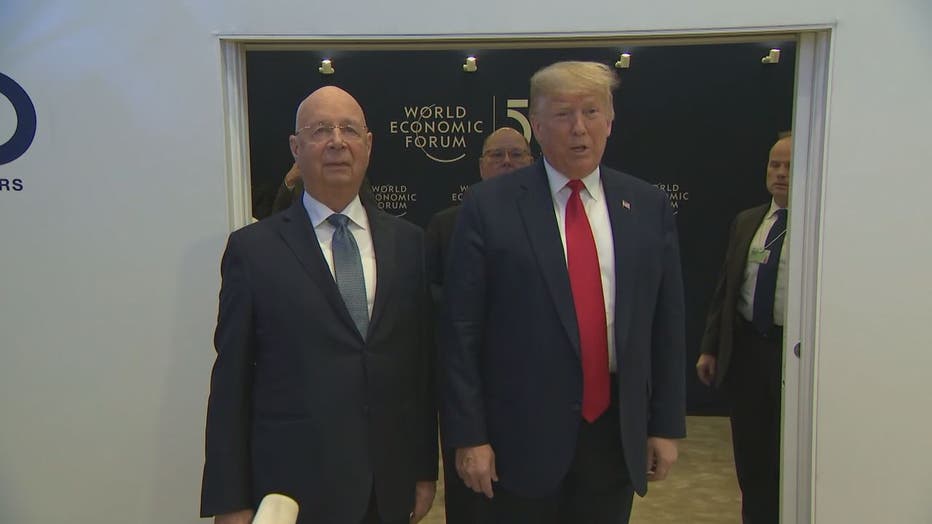 Trump has sought to wring trade concessions from the EU by threatening tariffs on German autos, including BMW and Mercedes-Benz.

Trump is just the third American president, after Andrew Johnson and Bill Clinton, to face a Senate impeachment trial. Johnson and Clinton were acquitted by the Senate.

There is precedent for international travel by an impeached U.S. leader. During his impeachment over an affair with a White House intern, Clinton visited Japan, South Korea, Israel and the Palestinian Authority. He traveled to Jordan for King Hussein's funeral in February 1999, just a few days before he was acquitted.

Two days after acquittal, Clinton went to Mexico on a state visit.

Trump is planning to make his first visit to India at the end of February, probably after the conclusion of his impeachment trial. He also has talked about traveling soon to Beijing, although he has given no dates, to open a new round of trade talks with China.