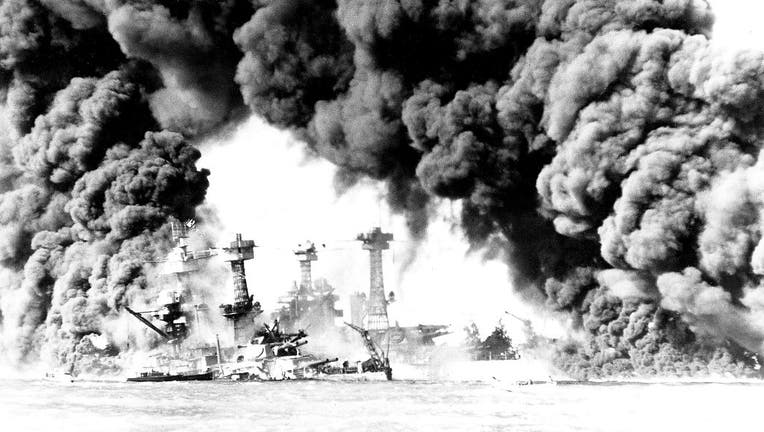 U.S. ships “Virginia” and “Tennessee” on fire after the Pearl Harbor attack on Dec. 7, 1941. (Photo by: Photo12/Universal Images Group via Getty Images)

U.S. servicemen and women and National Park Service officials gathered at Pearl Harbor on Monday to remember those killed in the attack -- but elderly survivors stayed home to pay their respects from afar to avoid health risks from the coronavirus pandemic.

The USS Arizona battleship bell rang at 7:55 a.m., the minute the attack began 79 years ago, to start a moment of silence. F-22 jets then flew overhead in missing man formation.

The Arizona today lies at the bottom of the harbor, where it sank shortly being hit by two bombs. The battleship lost 1,177 sailors and Marines, including more than 900 who remain entombed on board.

The U.S. military streamed the ceremony live online for survivors and others unable to attend in person.

"I think what we see today here is the resolve, despite a pandemic, for us to be able to pay our respects, to thank the greatest generation," said Adm. John Aquilino, the commander of the U.S. Pacific Fleet, said in his keynote address. "It also is a reminder to all that nothing will stop us."

Marines performing a rifle salute wore black masks during the ceremony, which featured a smaller crowd than in typical years.

RELATED: Timeline: Critical events that led up to 1941 attack on Pearl Harbor

Aquilino highlighted the story of Doris Miller, a mess attendant on board the USS West Virginia, who carried wounded shipmates to safety and manned a 50-caliber gun returning fire until he ran out of ammunition.

He continued to pull wounded sailors to safety even after an order to abandon ship. The Navy awarded Miller the Navy Cross for his heroism in 1942. Earlier this year, the Navy named its newest aircraft carrier after him.

"Today, a grateful nation reflects upon those who went above and beyond. We honor their service. We remember their sacrifice, and we pledge to continue striving for a better and safer world," Aquilino said. 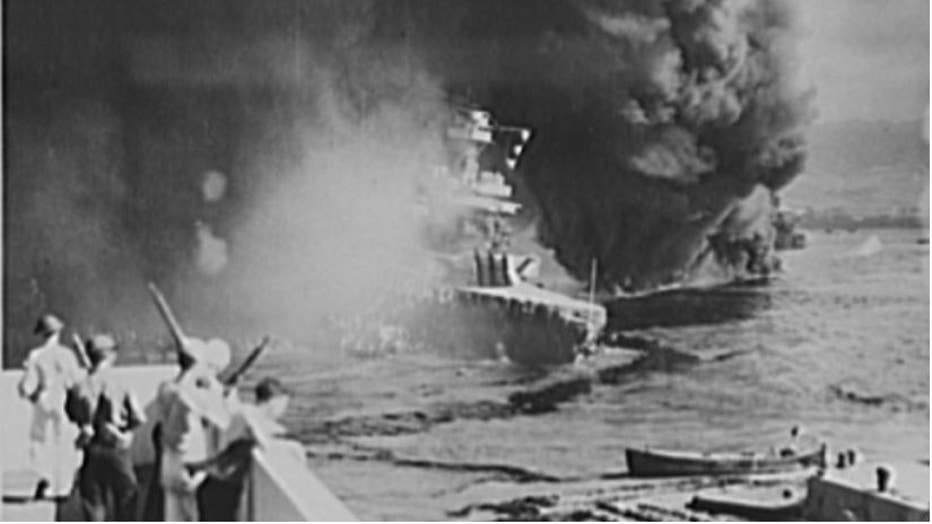 The U.S.S. California is hit during the Japanese attack on Pearl Harbor. (Photo credit: U.S. Navy via Library of Congress)

Altogether more than 2,300 U.S. troops died in the attack.

Warren Upton, a 101-year-old who served on the USS Utah, understood why he could not attend in person this year.

"I think it's too bad, but it's for safety reasons," Upton said from his home in San Jose, California, before Monday's ceremony

Moments before the attack, Upton was getting ready to shave when he felt the first torpedo hit the Utah. No one on board knew what made the ship shake. Then, the second torpedo hit and the ship began to list and capsize.

Upton swam ashore to Ford Island, where he jumped in a trench to avoid Japanese plans strafing the area. He stayed for about 30 minutes until a truck came and took him to safety.

Upton said he doesn't mind talking about that day. What upsets him more is that he lost shipmates over the years. He said only three crew members of the Utah are still alive, including himself.