Tennis star Novak Djokovic was deported from Australia for not being vaccinated against COVID-19 ahead of the Australian Open.

PARIS - Top-ranked player Novak Djokovic could be allowed to defend his French Open title under the latest COVID-19 rules adopted by the French government, even if he is still not vaccinated when the clay-court Grand Slam starts in May.

Djokovic was deported from Australia and barred from playing in the Australian Open this month for not meeting the country’s strict COVID-19 vaccination rules.

It initially appeared that the Serb tennis star would not be welcomed at Roland Garros either under a new law intended to exclude the unvaccinated from stadiums, restaurants, bars and other public places.

As questions quickly arose about Djokovic's status in France following his deportation from Australia, Sports Minister Roxana Maracineanu previously said that as soon as the law was passed the country's vaccine pass would become compulsory to enter stadiums, theater or exhibitions, "for all spectators, practitioners, French or foreign professionals."

But the vaccine pass is not restricted to vaccination.

Under the law that took effect on Monday, anyone who has proof they tested positive within the previous six months is exempt from having to show a vaccine pass. That suggests Djokovic could play in the French Open in May and June, the next Grand Slam tournament, because he has said he tested positive in mid-December. 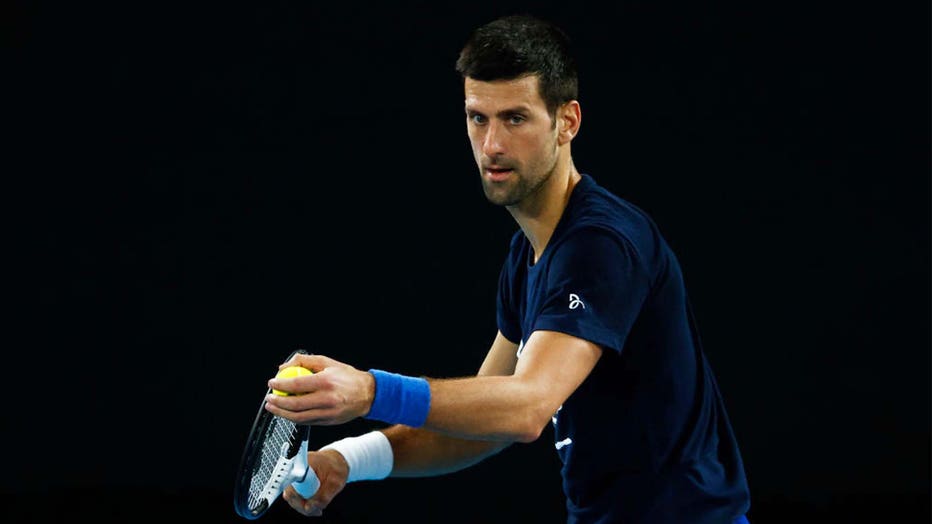 FILE - Novak Djokovic of Serbia serves during a practice session ahead of the 2022 Australian Open at Melbourne Park on Jan. 14, 2022 in Melbourne, Australia.

The French sports ministry was not immediately available to answer questions from The Associated Press on Djokovic.

French Open organizers have previously said it's too early to comment since virus restrictions can change between now and May depending on the virus situation.

Djokovic’s team also declined to comment Monday. Djokovic said earlier he would not give public statements until the end of the Australian Open.

Cafe owners and patrons in Paris largely welcomed the new law, which is central to the government’s anti-virus strategy.

"Personally, it reassures me in the sense that I know the people I have around me," said Parisian Charles Tuile. "We want to be in a place where we can be safe in terms of health. And if you can see that the waiter checks vaccine passes and even ID cards, then it’s reassuring in many ways."

France is registering Europe’s highest-ever daily coronavirus infection numbers, and hospitals are continuing to fill up with virus patients, even though the number of people in intensive care units has dropped in recent days.

The government has imposed few other restrictions amid the surge in the omicron variant, focusing instead on the vaccine pass, approved by France's parliament and Constitutional Council last week.

Critics question whether the pass will make much difference in a country where 94% of French adults have had at least one vaccine dose, and scattered groups held protests Saturday against the new law. The French government hopes that it protects the most vulnerable and reduces pressure on crowded ICUs, where most patients are unvaccinated.

Since last summer, France has required a "health pass" to go to any cafe, museum, movie theater or take a regional train or domestic flight. But until Monday, unvaccinated people could activate the pass by getting a recent negative test. The new pass only works for people who are fully vaccinated and those who recently recovered from the virus.

"To me, it’s not a problem (to show ID card) but I can perfectly imagine the kind of downward spiral it could trigger – it’s like racial profiling," said Tania Chauvin, 31, as she ate in a Paris restaurant.

France, meanwhile, opened up access to booster shots Monday for 12- to 17-year-olds.

Djokovic’s Australian saga began when he was granted an exemption to strict vaccination rules by two medical panels and the tournament organizer in order to play in the Australian Open based on documents he supplied showing he had recently had COVID-19. He received a visa to enter the country through an automated process. But upon arrival, border officials said the exemption was not valid and moved to deport him.

In the end, Australian authorities revoked Djokovic’s visa, saying his presence could stir up anti-vaccine sentiment and that kicking him out was necessary to keep Australians safe. He was deported a day before the tournament got underway in Melbourne.

Alex Turnbull in Paris contributed to this report. Petrequin reported from Brussels