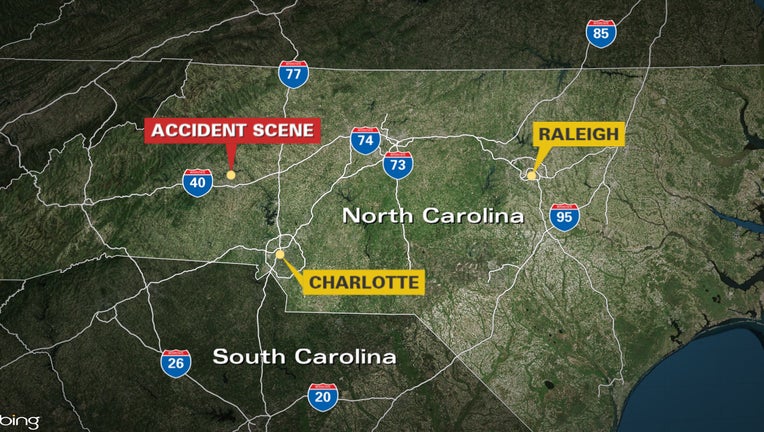 Map generated to show location of an accident where a North Carolina man died after his GPS led him to a defunct bridge that dropped off into a creek on Sept. 30.

A North Carolina man is dead after his GPS led him to a defunct bridge that dropped off into a creek on Sept. 30.

Phillip Paxson, a 47-year-old father of two girls, had been driving his Jeep at night from his oldest daughter's birthday party in Hickory when his GPS led him to a bridge that has been inoperative since heavy flooding in July 2013 destroyed it.

"It was a dark and rainy night and he was following his GPS which led him down a concrete road to a bridge that dropped off into a river," Paxson's mother-in-law, Linda McPhee Koenig, said in a Tuesday Facebook post. "The bridge had been destroyed [nine] years ago and never repaired. It lacked any barriers or warning signs to prevent the death of a 47 year old [sic] father of two daughters. He will be greatly missed by his family and friends. It was a totally preventable accident. We are grieving his death."

Now, Paxson's family is trying to bring attention to the tragedy they believe could have been avoided with proper maintenance or even just signage and barricades from the city warning drivers not to drive toward the bridge.

"This was a preventable accident, the bridge he went over at night had a gaping hole and their were no barricades," a GoFundMe page titled, "Paxson family," states. "It had been this way for many years. No one would take responsibility to repair it and now he has to pay the price. Please pray for our family during this most difficult time."

Authorities with the North Carolina State Highway Patrol responded to reports of an overturned vehicle in a creek near 24th Street Place Northeast — a private road — in Catawba County, according to WCNC.

"We were saddened to learn of this incident," Catawba County Communications Director Amy McCauley told Fox News Digital in a statement. "The road where this occurred is private property. In North Carolina, counties do not have the authority to maintain roads (public or private)."

A 2014 article titled, "BRIDGE TO NOWHERE: No resolution in sight for neighborhood's gaping hole," published in the Hickory Record stated that "the bridge is still in disrepair" eight months after the flooding had destroyed it in 2013. Nothing had changed in nine years.

Even barricades that had previously warned drivers not to cross the bridge had been washed away, WCNC reported.

"He didn’t fall off a bridge. He didn’t drive off a bridge," a loved one at the site of the accident, where locals have established a makeshift memorial, told the outlet. "He drove to his death through that 20 [foot] ravine."

A deed obtained by WNCN linked the road to subdividers Keener, Shook and Tarlton — a partnership that dissolved in 1994, according to the outlet.

An obituary for Paxson states that he "had a lifelong affection for muscle cars, motorcycles, dirt bikes, boats, really anything with a motor."

"He traveled the world with his father-in-law riding motorcycles. He and his wife along with their two daughters enjoyed camping and boating with family and friends. Phil put his family first and his friends, almost equal, second," the obituary states. "He was larger than life, always ready for an adventure, with a permanent smile on his face, he would give you the shirt off his back or talk you out of the one on yours."