President-elect Joe Biden on Dec. 29 gave remarks on the state of the pandemic and criticized the Trump administration for the pace of distributing COVID-19 vaccines, saying it is falling behind.

NEW YORK - As the coronavirus swept across the globe last year, the Centers for Disease Control and Prevention sank into the shadows, undermined by some of its own mistakes and stifled by an administration bent on downplaying the nation's suffering.

Now a new CDC director is arriving to a mammoth task: reasserting the agency while the pandemic is in its deadliest phase yet and the nation’s largest-ever vaccination campaign is wracked by confusion and delays.

"I don’t know if the CDC is broken or just temporarily injured," but something must be done to bring it back to health, said Timothy Westmoreland, a Georgetown University law professor focused on public health.

The task falls to Dr. Rochelle Walensky, 51, an infectious-diseases specialist at Harvard Medical School and Massachusetts General Hospital, who was sworn in Wednesday. She takes the helm at a time when the virus's U.S. death toll has eclipsed 400,000 and continues to accelerate. 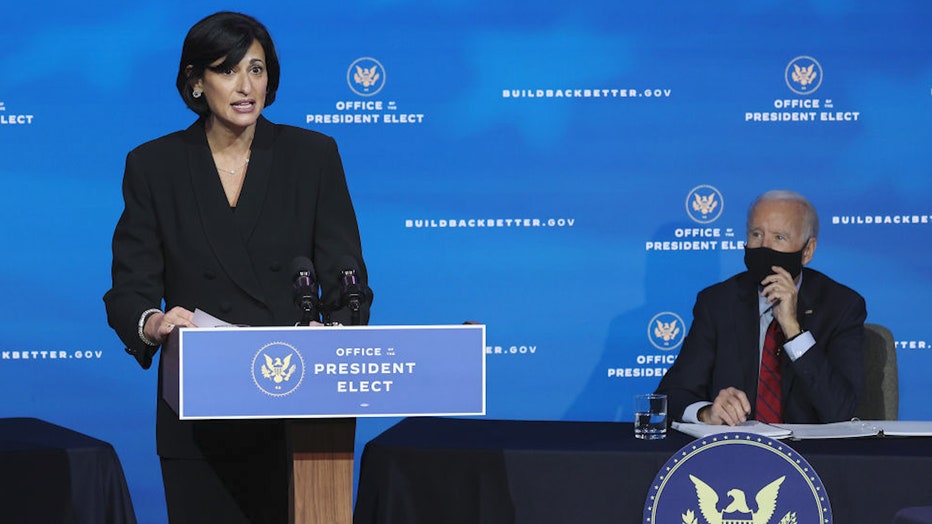 RELATED: COVID-19 mutations are rapidly appearing as US surpasses 400,000 deaths

While the agency has retained some of its top scientific talent, public health experts say, it has a long list of needs, including new protection from political influence, a comprehensive review of its missteps during the pandemic and more money to beef up basic functions like disease tracking and genetic analysis.

Walensky has said one of her top priorities will be to improve the CDC’s communications with the public to rebuild trust. Inside the agency, she wants to raise morale, in large part by restoring the primacy of science and setting politics to the side.

The speed at which she is assuming the job is unusual. In the past, the position has generally been unfilled until a new secretary of health and human services is confirmed, and that official names a CDC director. But this time, the Biden transition team named Walensky in advance, so she could take the agency's reins even before her boss is in place.

Walensky, an HIV researcher, has not worked at the CDC or at a state or local health department. But she has emerged as a prominent voice on the pandemic, sometimes criticizing certain aspects of the state and national response. Her targets have included the uneven transmission-prevention measures that were in place last summer and a prominent Trump adviser's endorsement of a "herd immunity" approach that would let the virus run free.

RELATED: 'There is no federal reserve': Governors say HHS made empty promise on more vaccine doses

She acknowledged the weaknesses in her resume. "When people write about me as the selection for this position, they will say, ‘But she has no on-the-ground public health experience,'" she said during a podcast with the Journal of the American Medical Association.

The podcast’s host, Dr. Howard Bauchner, who is also editor of the journal, praised her effusively. "I can't imagine the CDC and the country being luckier ... mostly just because you can communicate, which is such an important task for the head of the CDC," he said.

Walensky did not respond to interview requests from The Associated Press.

She will succeed Dr. Robert Redfield, 69, who came to the CDC with a similar resume as an outsider from academia. Redfield kept a low profile during his first two years in office after being appointed by the Trump administration in 2018. Veteran CDC scientists handled crises such as a deadly national surge in hepatitis A cases among homeless people and illicit drug users, and a mysterious spike in severe illnesses in people who vaped electronic cigarettes.

The agency’s handling of the COVID-19 outbreak began in a similar way. Staff scientists took the lead, holding regular news conferences to update the public on the emerging problem.

But the agency stumbled in February when a test for the virus sent to states proved to be flawed. Then, later in the month, a top CDC infectious-disease expert, Dr. Nancy Messonnier, upset the Trump administration by speaking frankly at a news conference about the dangers of the virus when President Donald Trump was still downplaying it.

Within weeks, the agency was pushed off stage. Redfield made appearances, but he was often a third-tier speaker after remarks dominated by Trump, Vice President Mike Pence and others.

The CDC "has been sidelined, has been maligned, has been a punching bag for many politicians in the outgoing administration. And that has had a detrimental effect on the agency’s ability to fulfill its mission," said Dr. Richard Besser, a former CDC official who now heads the Robert Wood Johnson Foundation.

White House officials also took steps to try to control the CDC's scientific reports and the guidance on its website. For instance, the agency removed guidance that advised limiting church choir activities even though studies had demonstrated the danger of transmission of extended singing indoors. The agency also dropped guidance advising that anyone who came into close contact with an infected person should get tested — then re-adopted it after criticism from health experts.

"Folks across the political spectrum have had reason to doubt the veracity and accuracy, sometimes, of CDC’s messages," said Adriane Casalotti of the National Association of County and City Health Officials.

While public health veterans say they do not know everything that happened behind the scenes, they say Redfield apparently failed to stand up for agency scientists, declined to contradict Trump and those around him and passively allowed the Trump administration to post its messaging on CDC websites.

"He wasn’t willing to resign when it was necessary or to be fired for standing up for principle," said David Holtgrave, a former CDC staffer who is now dean of the public health school at the State University of New York at Albany.

Redfield declined to be interviewed.

The pandemic also exposed some CDC failures and weaknesses unrelated to politics. The test kit problem was tied to laboratory contamination at the agency’s Atlanta headquarters — a sign of sloppiness. The CDC also lost its standing as the nation's go-to source for case counts and other measures of the epidemic after university researchers and others developed better systems for tracking infections.

Much of that has to do with cycles of funding for the national public health system that rise in reaction to a crisis and then fall, hurting efforts to prevent the next crisis.

Last week, Biden said he would ask for $160 billion for vaccinations and other public health programs, including an effort to expand the public health workforce by 100,000 jobs.

RELATED: Biden to make 3rd round of stimulus a top priority

Georgetown's Westmoreland called for a law or other measure to prohibit political appointees from having editorial review of CDC science and to ban them from controlling when the agency releases information. He also recommended a review of the CDC to determine if the agency’s problems can be traced to mismanagement by Trump’s political appointees or whether there are deeper flaws in the organization.

Some experts suggest that an administration that values science and increases funding could restore the CDC to preeminence. Biden has pledged to put scientists out front on COVID-19 matters, Besser noted.

"That’s something I think will be fixed on Day One," he said. "One of the things that gives me hope is I did not see a large exodus from CDC during this past year. I saw professionals doing their jobs. I saw the mental toll they were taking, but I did not see them giving up."