Concerns about the welfare of National Guard troops

As thousands of National Guard members packed up and left DC, others are staying longer and Fox News has confirmed more than 100 of them have tested positive for COVID-19.

ARLINGTON, Va. (FOX 5 DC) - As thousands of National Guard members packed up and left DC, others are staying longer and Fox News has confirmed more than 100 of them have tested positive for COVID-19.

Right now, there are several troops quarantining at the Embassy Suites in Arlington as well as other hotels in the area after contracting the deadly virus.

A soldier’s wife contacted FOX 5 telling us her husband and other troops don’t have access to thermometers to check their temperature, any medicine to take care of themselves, or adequate meals.

This morning, she traveled to Arlington from Haymarket – about an hour away – to deliver her husband a care package with food so he didn’t have to venture out and put the community at risk.

The woman, who wants to remain anonymous as she fears her husband could face repercussions, claims her soldier has not received any medical attention while fighting COVID-19 and is having to deal with his sickness on his own. 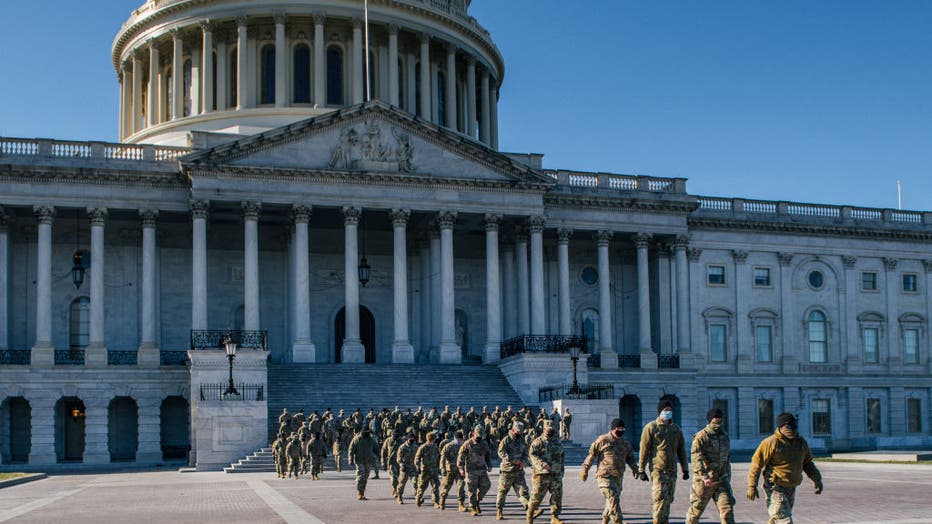 WASHINGTON, DC - JANUARY 23: National Guard Citizen-soldiers exit after a U.S. Capitol tour on January 23, 2021 in Washington, DC. Due to COVID-19, Capitol tours had been restricted since March 13, 2020, but have exclusively been reopened for Nationa

However, Maj. Gen. Timothy O. Williams with the Virginia National Guard said they are committed to making sure all of the soldiers are receiving the proper care based on their symptoms, and they will make sure the necessary resources are made available to support them.

In a statement, they said: "The Virginia National Guard has a team of Soldiers dedicated to checking on the welfare of anyone isolated or quarantined. There are medical providers checking on them twice a day either virtually and in person, and meals are provided three times a day. Soldiers can also contact on-call military medical personnel if they need additional assistance. Soldiers should keep their chain of command informed and let them know if there are any unmet needs."

This all comes after last week, thousands of troops who had been on standing duty in the United States Capitol were told to vacate Congressional buildings and take their rest breaks outside and in nearby parking garages.

Photos circling around on social media show Guard members packed together and sleeping on the ground.

The wife of a troop who did not want FOX 5 to reveal her name feels like the soldiers who are here to serve and protect are being abused.

"It’s hard as a military spouse. We had to deal with them first laying on the cold, hard floors of the capitol and then they were sent to the garage also. However, not getting medical care at this time when they’re sick and could obviously use it – isn’t tolerable at this point – the men and women deserve better," said the wife of a soldier.

In response, Senator Tim Kaine said, "I am deeply troubled by these reports and am pressing the National Guard for answers today. Our service members should be treated with the respect they deserve."

Senator Mark Warner’s spokesperson echoed that same sentiment and said, "Senator Warner is looking into the issue. Obviously, if this is accurate it would be deeply alarming."

"I think the logistics of this from the start have not been adequate and no they haven’t been treated well. Thankfully, my husband is a strong personality – very supportive of his troops, but contracting COVID and not getting help is demoralizing to troops," said the wife.

To support troops during these difficult times, an Amazon wishlist has been set up for donations. Users can select Embassy Suites for shipping.

Stay with FOX 5 for updates on this developing story.