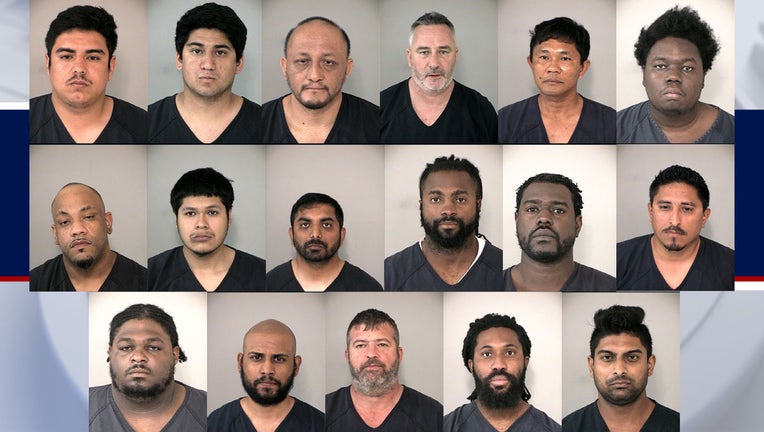 SEE THE SIGNS: 'Most important way to help' human trafficking victims, according to a Houston survivor

Based on a press statement, the district attorney's office collaborated with the Human Trafficking Rescue Alliance and partnering agencies to conduct three multi-day proactive operations in October and November 2021, and January 2022, respectively.

Fort Bend Co. District Attorney's office held a press conference Monday about its efforts now to fight against human trafficking. It's called Operation Lavender, and the purpose here is to target illicit massage businesses in the county and to hold them accountable.

The operations resulted in a total of 41 arrests of traffickers and those who were soliciting prostitution. Seven victims, as well as one who was underage, were also found.

"These operations are designed to reduce the demand for prostitution, thereby reducing the number of victims of human trafficking," said Chief of the Special Crimes Division, Mark Hanna in a press statement. "Solicitation of prostitution used to be a misdemeanor offense; however, a new law that began in September 2021 makes this offense a felony. This change in the law shows how the State of Texas is taking steps to remove the scourge of human trafficking from our communities."

The January 2022 operations we're told focused on individuals engaged in human trafficking and identifying human trafficking victims. Undercover officers sought those offering sexual services on the internet that were arranged to find the potential victims and their trafficker or "pimp." Five traffickers were arrested, and seven victims were identified.

A woman, whose identity we are concealing for her safety, describes her life as a prostitute, how she was trafficked, and the jail time that she says saved her life. She’s joined by the advocates working with her in her journey to a safe and whole life.

The identified victims were given assistance by the Forensic Center of Excellence and YMCA International, including forensic medical exams and treatment, counseling services, and housing.

Fort Bend County District Attorney Brian Middleton also issued a statement congratulating the team on the results and further stressed the importance of being proactive to rescue as many trafficking victims as they can.

"41 arrests are significant enough, but to rescue seven trafficking victims is remarkable – and is exactly why we do what we do," he said. "The success of these operations show that we have more work to do if we are to eradicate trafficking from Fort Bend County.

"As I have said repeatedly, we will be relentless in our pursuit of those responsible for human trafficking, including those who create the demand for trafficking victims in this county," he continued.