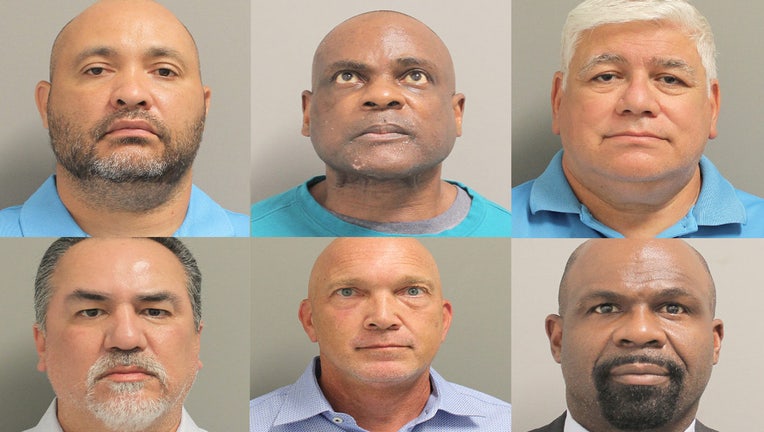 HOUSTON - A year and a half after the deadly no-knock raid at a home on Harding Street new criminal charges are being filed.

Five of the six are charged with falsifying government documents used in narcotics investigations.

“Goines and others could never have preyed on our community the way they did without the participation of their supervisors; every check and balance in place to stop this type of behavior was circumvented,” Ogg said in a statement.

The incident resulted in a shootout that left officers injured and killed Rhogena Nicholas Dennis Tuttle, the married residents, and their dog.

In addition to Goines and Bryant, those charged include former sergeants Clemente Reyna and Thomas Wood, former lieutenant Robert Gonzales, and former senior officer, Hodgie Armstrong, according to court records.

According to the DA's office, supervisors signed records stating they witnessed street-level officers pay money to confidential informants for buying drugs, when the evidence reveals the supervisors were not actually there, and therefore could not have witnessed what they claimed to have witnessed, according to prosecutors.

“This investigation is peeling back layers of a narcotics-enforcement system gone array,” Ogg said. “It calls into question the way HPD has been enforcing narcotics laws, especially in communities of color. The lion’s share of arrests made by this squad were minority men for low-level drug crimes.”

The cases filed Wednesday will be presented to a Harris County grand jury this month, so long as COVID-19 permits.

Prosecutors are also reviewing cases to determine if defendants were wrongfully convicted after being arrested by Goines. The review has already resulted in the district attorney’s recommendation that two individuals are actually innocent as well as the dismissal of other cases.

Prosecutors have notified hundreds of defendants that there may be problems with their criminal convictions and have asked the courts to appoint lawyers to review their legal options.

Officer Gerald Goines – Three charges of tampering with a government record (search warrants.) Third-Degree Felony, two to 10 years in prison. One charge of theft by a public servant between $2,500 and $30,000, Third-Degree Felony.

Officer Steven Bryant –Two charges of tampering with a government record (confidential informant forms which contain details of money allegedly given to informants for services or buying drugs.) State Jail Felony, six months to two years in jail. One charge of theft by a public servant between $2,500 and $30,000, a Third-Degree Felony.

Sgt. Clemente Reyna – Three charges of tampering with a government record (confidential informant forms.) State Jail Felony. One charge of theft by a public servant between $2,500 and $30,000, Third-Degree Felony.

Sgt. Thomas Wood – One charge of tampering with a government record (confidential informant form.) State Jail Felony. One charge of theft by a public servant between $2,500 and $30,000, Third-Degree Felony.

Lt. Robert Gonzales – One charge of misapplication of fiduciary property, State Jail Felony, for the reckless handling of HPD money. Gonzales held a position of trust and was required to verify and authorize any expenditures of up to $2,500.

Chief Art Acevedo is quoted as saying, "The Harris County District Attorney's Office has not briefed the police department on the charges recently announced against former HPD employees who separated from the department more than a year ago.

"We have cooperated fully during the investigative process and will continue to do so."

In a follow-up tweet, HPD quotes Chief Acevedo saying he did not know the DA's office was fine with the release of the department's audit.

"It is news to me and the Houston Police Department that District Attorney Kim Ogg has no issue with us releasing the Narcotics Division audit," the tweet reads. "She and her office leadership have asked us to withhold this audit as recently as last week. As a result, and since the DA’s office shared its answer with the Houston Chronicle editorial board rather than reply directly to us, here is the audit."

Acevedo responded to the thread with a link to the Houston Chronicle editorial from July 1 that urged the HPD chief to release the audit.

The statement attacks DA Ogg, calling her the "most corrupt District Attorney in the history of Harris County." 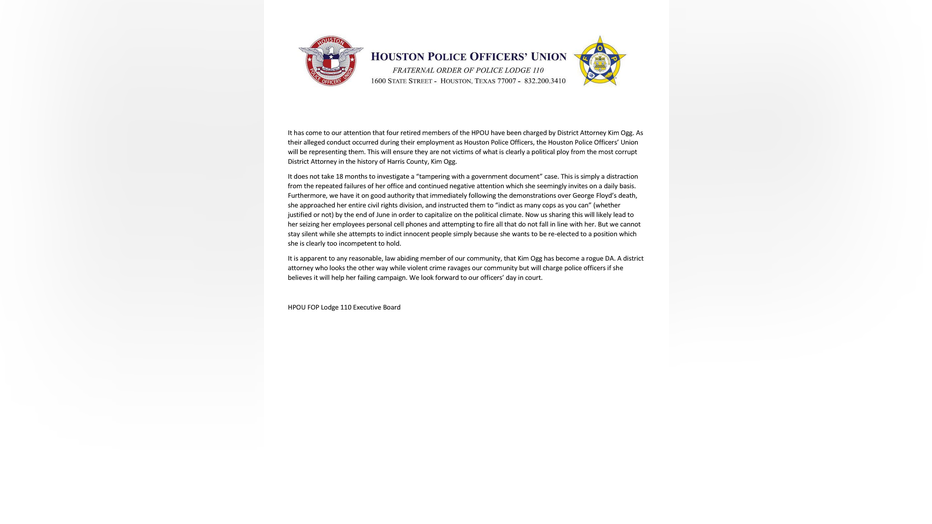