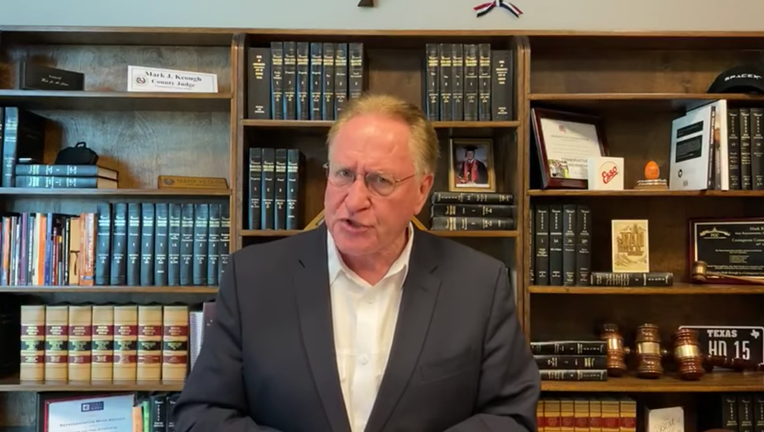 MONTGOMERY COUNTY, Texas - Montgomery County Judge Mark Keough has been charged in connection with a September crash involving three vehicles in The Woodlands.

According to the arrest warrant, the crash occurred in the westbound lanes of Grogans Mill Road near Blue Fox Road in Montgomery County on September 10 around 7:30 a.m.

According to the arrest affidavit, the vehicles involved included a 2019 silver Lexus SUV, a 2015 gray Mazda MX-6 and a 2020 Chevrolet Tahoe police vehicle with the Montgomery County Sheriff’s Office Precinct 5.

Witnesses told DPS Troopers that Keough’s vehicle, the 2019 Lexus SUV, struck the Mazda from behind, then sped over into the left lane. The witness stated he believed that Keough lost control of the vehicle, went into the right lane, crossed over the shoulder, and struck the back of the 2020 Chevrolet Tahoe that was sitting off the roadway.

Keough had to be taken to the hospital for treatment, according to the report.

The affidavit stated that Keough didn’t have his normal mental or physical faculties while operating his motor vehicle due to his ingestion of zolpidem, also known as Ambien.

He said that the amount of his legally prescribed medication was taken in accordance with his doctor's directions.

Keough took to social media on Tuesday and in a video message he stated that “there was no alcohol present and there was no illegal substances at the time of the crash.”

Keough stated that the amount of his prescribed sleep aid was “within normal levels.”

The Montgomery County District Attorney's Office said in a statement Wednesday that, following an investigation by DPS, a judge signed a warrant on December 8 for the arrest of Keough on the offense of Driving While Intoxicated, First Offense, a Class B Misdemeanor. Officials say Keough surrendered himself to the Montgomery County Jail on Wednesday and was given a date to appear in court.

"On December 8, 2020, following an investigation by the Department of Public Safety, a Montgomery County judge signed a warrant for the arrest of Mr. Mark Keough for the offense of Driving While Intoxicated, First Offense, a Class B Misdemeanor. Mr. Keough surrendered himself to the Montgomery County Jail on December 9, 2020, and was given a date to appear in County Court 1 on January 5, 2021. As President Theodore Roosevelt stated,'no man is above the law, and no man is below it; nor do we ask any man’s permission when we ask him to obey it.' Any further questions about this case should be directed to Mr. Keough’s defense attorney, Mr. Doug Atkinson."