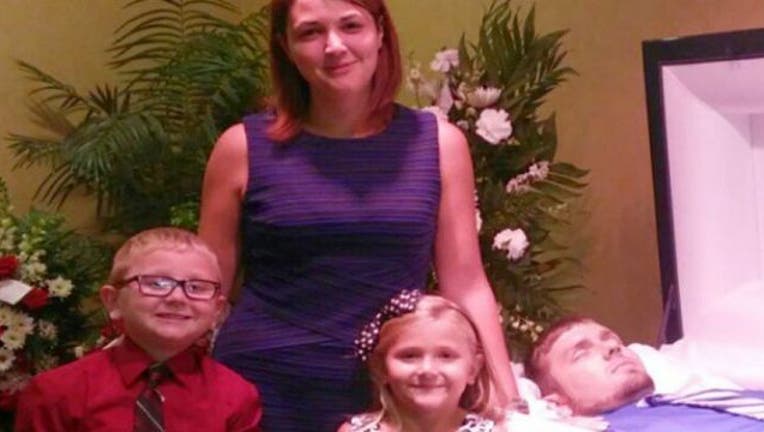 CHICAGO (FOX 32 News) - An Ohio woman who lost the father of her two kids has posted a jarring photo of them standing next to his casket in an attempt to warn people about the harsh reality of the deadly drug heroin, according to CBS.

WTRF reports the dad's cause of death hasn't been released, but Eva Holland believes drugs played a role.

The photo is going viral online, and the New York Daily News reports that people have already told Holland it has helped them quit, or stay clean of heroin.

Holland posted the photo with the following caption on Facebook:

“I'm sure this photo makes a lot of people uncomfortable it may even piss a few people off but the main reason I took it was to show the reality of addiction. If you don't choose recovery every single day this will be your only way out. No parent should have to bury their child and no child as young as ours should have to bury their parent. This was preventable it didn't have to happen but one wrong choice destroyed his family. I know a lot of people may be upset I'm putting it out in the open like This but hiding the facts is only going to keep this epidemic going. The cold hard truth is heroin kills. You may think it will never happen to you but guess what that's what Mike thought too. We were together 11 years. I was there before it all started. I knew what he wanted out of this life, all his hopes and dreams. He never would've imagined his life would turn out this way. He was once so happy and full of life. He was a great son, brother, friend but most importantly he was a great dad. He loved those kids more than anything. But as we all know sometimes life gets tough and we make some wrong choices. His addiction started off with pain pills then inevitably heroin. He loved us all so much he decided enough was enough and went to rehab at the end of last year. He got out right before Christmas as a brand new man. He had found His purpose for living again, he found his gorgeous smile again, he became the man, the son, the brother, the dad that we all needed him to be again. He did so good for so long but then a couple months ago It started with a single pill for a "tooth ache" which inevitably lead him back down the road of addiction instead of staying the (course) of recovery. He said he could handle it, that he could stop on his own and didn't need to get help again. Well he was wrong, last Wednesday he took his last breath. My kids father, the man I loved since I was a kid, a great son and a great person lost his battle. I just needed to share his story in case it can help anyone else.”