The history of Decoration Day

Before it was Memorial Day, this holiday commemorated military members who had given their lives.

The last Monday in May marks Memorial Day in the United States.

It’s more than just a three-day weekend. It’s the day Americans commemorate those who made the ultimate sacrifice while serving in the armed forces.

It’s a tradition that has evolved over the years. From Decoration Day to the Memorial Day we know today, here’s a look at its origins:

Where did Memorial Day begin?

Macon, Georgia; Richmond, Virginia; and Boalsburg, Pennsylvania are among the many cities claiming to be the birthplace of Memorial Day. Each of them has traditions of paying tribute to fallen troops dating back to the Civil War.

Even so, Waterloo, New York, is widely cited as the official birthplace of the holiday. Some argue the area had a more defined, widespread commemoration.

Decoration Day was first celebrated on May 30, 1868. People honored those who had perished in war by decorating their graves with flowers.

According to the U.S. Department of Veterans Affairs, General John A. Logan picked May 30 because that is when "flowers would be in bloom all over the country." The History Channel, however, notes that "according to legend, Logan chose May 30 because it was a rare day that didn’t fall on the anniversary of a Civil War battle."

In the late 1800s, the name Memorial Day would become more popular, though it would officially maintain its Decoration Day identity until 1968.

After World War I, the ceremonies expanded to honor troops who had given their lives in all American wars.

In 1968, a government mandate placed the holiday on the last Monday in May. Three years later, it became an official nationwide observance.

Some veterans, however, were not pleased with the decision to move Memorial Day to the last Monday in May — fearing it would mark "the first long weekend of summer and not its intended purpose to honor the nation’s dead," the History Channel said. 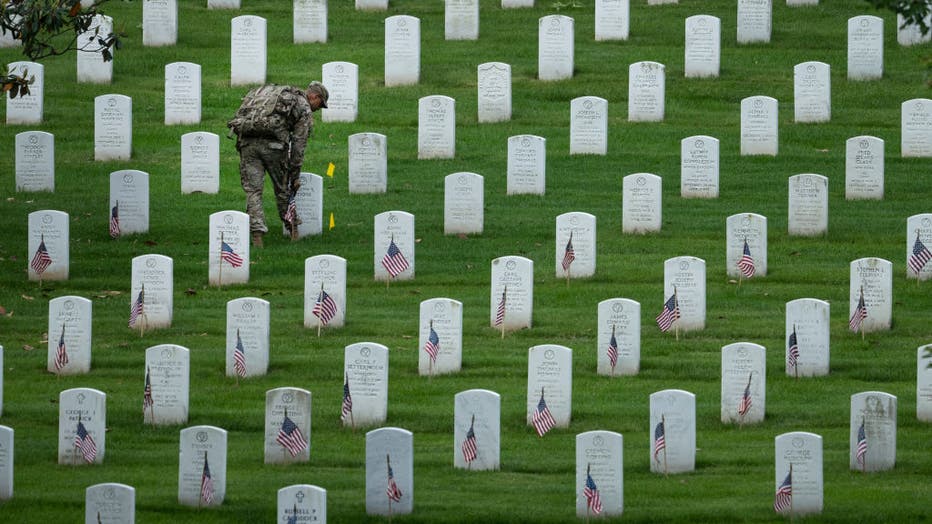 ARLINGTON, VA - MAY 26: A member of the 3rd U.S. Infantry Regiment places flags at the headstones of U.S. military personnel buried at Arlington National Cemetery, in preparation for Memorial Day, on May 26, 2022, in Arlington, Virginia. (Photo by Dr

Both Memorial Day and Veterans Day honor America’s troops, but Memorial Day is specifically for those who died in service.

Veterans Day is often more celebratory, while Memorial Day is meant to be a somber remembrance.

Editor’s note: A version of this story was originally published on May 28, 2021. It was reported from Atlanta.