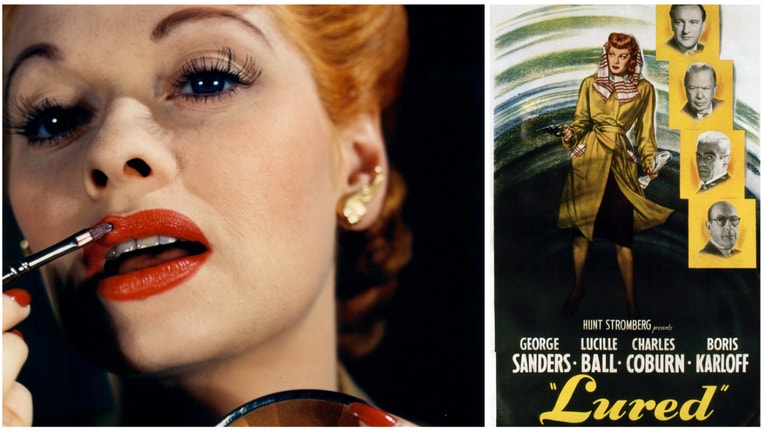 NORWICH, U.K. - Long before Lucille Ball wore the TV sitcom crown, the legendary funny woman had already claimed the title of "Queen of the B’s" (meaning B-movies). "I Love Lucy" transformed the actress into an icon, but in the two decades before that monster success, she racked up more than 40 film credits — that’s about two movies per year. These include the star-packed "Stage Door" alongside Katharine Hepburn, Ginger Rogers and Eve Arden, as well the MGM musical comedy "Du Barry Was a Lady." The latter marked the first time her famous red hair appeared in Technicolor — in fact, hair maestro Sydney Guilaroff first dyed it that trademark shade for this movie.

Fans looking to explore Ball’s vast back catalog have plenty of hidden gems awaiting them, and no doubt the Amy Poehler-directed documentary "Lucy & Desi" and last year’s Oscar-nominated "Being the Ricardos" have reignited some interest in the lesser-known titles. Luckily, there are plenty of options for those looking to watch one of Ball’s pre-"Lucy Ricardo" ventures, and Ball has worked with some of the biggest names in Hollywood — both in front of and behind the camera.

Ball routinely found herself in roles of a similar bent: the wise-cracking showgirl/actress/dancer. "Lured" played into that typecasting, but with a crime-solving twist. Read ahead to discover the ins and outs of director Douglas Sirk’s 1940s detective story, which is streaming (for free!) on Tubi.

What is "Lured" about? 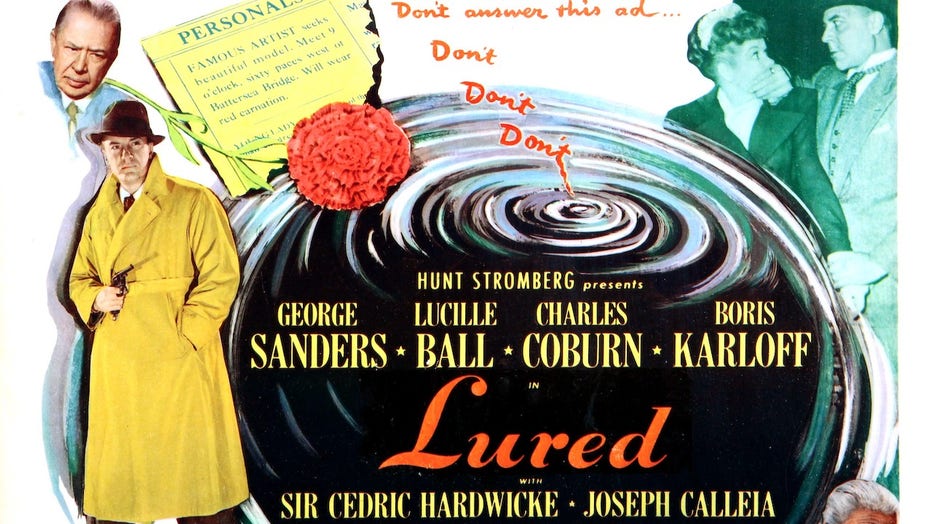 Released in 1947 by United Artists, "Lured’ is set in post-WWII London (though shot on a Hollywood backlot) and tells the story of a serial killer who finds his beautiful victims through newspaper personal ads. He taunts the police about his crimes with dodgy poetry that reads like a rip-off of the French 19th-century poet Charles Baudelaire. Despite having access to the latest forensic techniques, Scotland Yard — led by Inspector Harley Temple (Charles Coburn) — is stumped and needs a different approach.

WATCH FREE ON TUBI: Lucille Ball in "Lured" — get the app

Enter Sandra Carpenter (Ball), an American woman making a living in the nightclubs of London’s West End theatre district as s a "taxi dancer" — a dancer who partners with nightclub patrons on a pay-per-dance basis. Sandra dreams of getting a more lucrative entertainment gig than those the Broadway Palladium has to offer, but when she snags an audition to perform at one of the clubs, her terrible boss won’t let her attend.

Bad news stacks up when her friend Lucy (Tanis Chandler) announces she will no longer be Sandra’s taxi-dancer seatmate. Lucy has met a man in the personal ads who promises to whisk her away from this life; instead, she meets her death. It is Lucy’s disappearance and the suspected involvement of the poetry killer than causes Sandra to reach out to the police. From there, she’s tasked with becoming the bait.

WATCH FREE ON TUBI: Lucille Ball in the family comedy "Yours, Mine And Ours" — get the app

What follows is a crime thriller that hits on several conspiracies, throws in a romanceand gives Ball the chance to flex her detective skills — though with the expected amount of 1940s damsel-in-distress nonsense. (Sadly, we can’t have everything).

Why should you watch "Lured"? 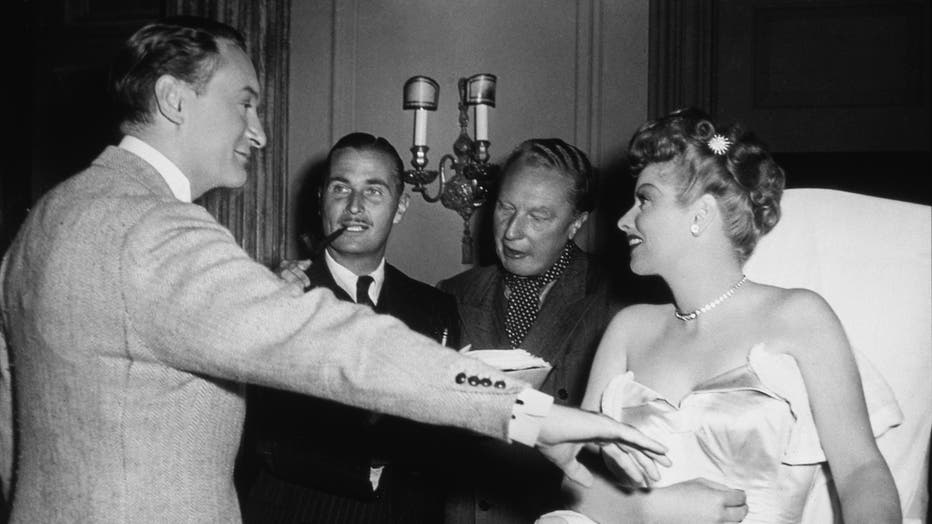 With "Lured," director Douglas Sirk crafts what feels like two different movies in one: part murder mystery, part romance. Sandra gets her undercover police assignment after a very brief interview — one that’s sure to raise contemporary eyebrows. This entrance examination includes confirming whether she can dress a wound, proving her observational skills and hoicking up her skirt to reveal her legs. Probably not a legit set of questions. Still, Sandra earns her temporary lady detective status (without a Miss Fisher and Jessica Fletcher there to show her the ropes).

WATCH FREE ON TUBI: 16 seasons of "Columbo" — get the app

Sandra is then tasked with answering any personal ads that specifically call for an attractive and unattached young woman. What follows is a montage of unusual requests which eventually lead Sandra to the home of dress designer Charles van Druten, played by horror icon Boris Karloff. Without giving away too much, it should be noted this scene is deeply weird and that the movie would’ve benefited from more of this strange tone.

Ball proves what a good set of screaming pipes she has, but thankfully, Sandra has her wits about her. It is easy to see why the "hard-as-nails career girl" parts (as Ball describes them her memoir) came her way, because her dry delivery after this scary encounter is incredibly endearing. She is quick with an eyeroll and offhand comment. Even in a B-movie, she dazzles. 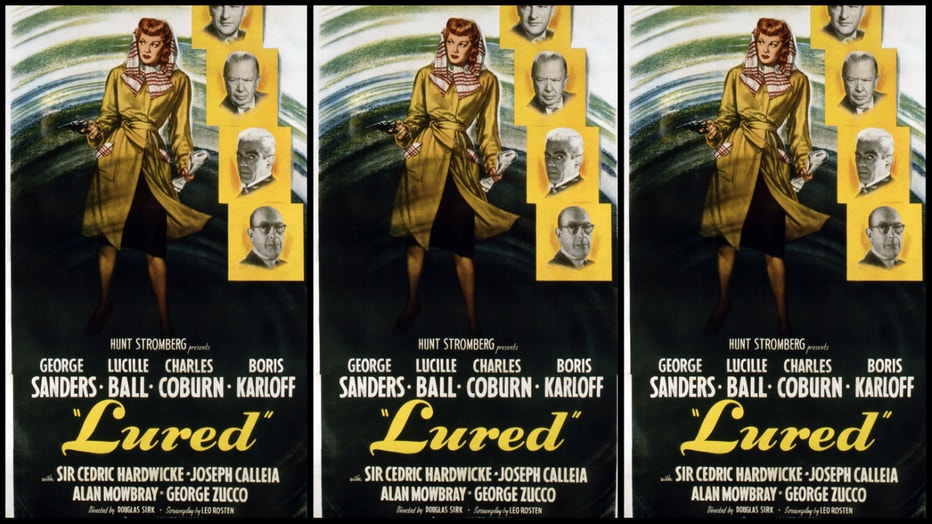 Going undercover leads to an encounter with a man she has flirted with over the phone, and while the caddish Robert Fleming (George Sanders) does not deserve a minute of Sandra’s time, he has all the smooth moves to make him seem irresistible. Thankfully, she leaves him hanging before succumbing to his charms.

WATCH FREE ON TUBI: Alfred Hitchcock’s "Notorious" — get the app

Ball calls "Lured" a "routine whodunit" in her memoir, but the many twists and turns are far from run-of-the-mill. Yes, the killer isn’t particularly well-concealed and the letters to the police spouting bad poetry aren’t exactly revolutionary. However, the journey Sandra goes on makes "Lured" worth the ride — even if Ball isn’t as involved in the final act as this writer would’ve liked. Ball is crackling throughout, and her ability to simultaneously sell streetwise and naive is rather impressive. Given that she would take TV by storm within five years of the film’s release, "Lured" is one of the closing chapters in Ball’s reign as "Queen of the B’s."

It is truly rewarding to venture back in time to this era of filmmaking to enjoy the glamorous trappings of this era. Yes, there are several glorious gowns, but designer Elois Jenssen also reveals her strength in creating daywear for Ball. The details are always right, whether it’s the plaid trim on a hooded coat, a beautiful tweed vest or a chic skirt suit with a matching polka dot bow and hat feather— not to mention the skirt’s lining, which we get a glimpse of when Sandra takes the leg test. Within a decade, Jenssen would design a pleated polka dot housewife dress for Ball which would become a defining Lucy Ricardo ensemble.

For the first two seasons of "I Love Lucy," Ball wore off-the-rack garments that wardrobe supervisor Della Fox purchased at department stores like Ohrbach’s (including some earlier polka dot numbers). When it was time to hire a costume designer, Ball turned to someone she had worked with before. "Lured" doesn’t seem to have made much of an impression on Ball, given how little she talks about it in her memoir ("The Big Street" is her favorite film she did from this period), but Jenssen’s work certainly did.

WATCH FREE ON TUBI: Alfred Hitchcock’s "Dial M for Murder" — get the app

Sandra’s fabulously curated daywear reflects the character’s keen eye for fashion. She is also quick to put her police expense account to good use when her personal ad dates require a more splendid sartorial splash. Not to mention the wedding gown she models for Karloff’s Charles van Druten. Later, a stunning strapless "dress of shining stars" is important to the plot, and Ball carries this Jenssen design off with aplomb.

"Lured" is in black and white, but the publicity stills leaned into Ball’s movie star trappings, including a stunning shot of her applying lipstick (which you can see below). Most people wouldn’t be able to name the movie this shot comes from, but it’s a recognizable image that leans into the red hair and red lipstick pairing — not to mention the expressive peepers and false eyelashes that would later become part of her wide-eyed comedy routine. "Lured" was released before the world loved Lucy, but it makes it clear that Ball was already a star. 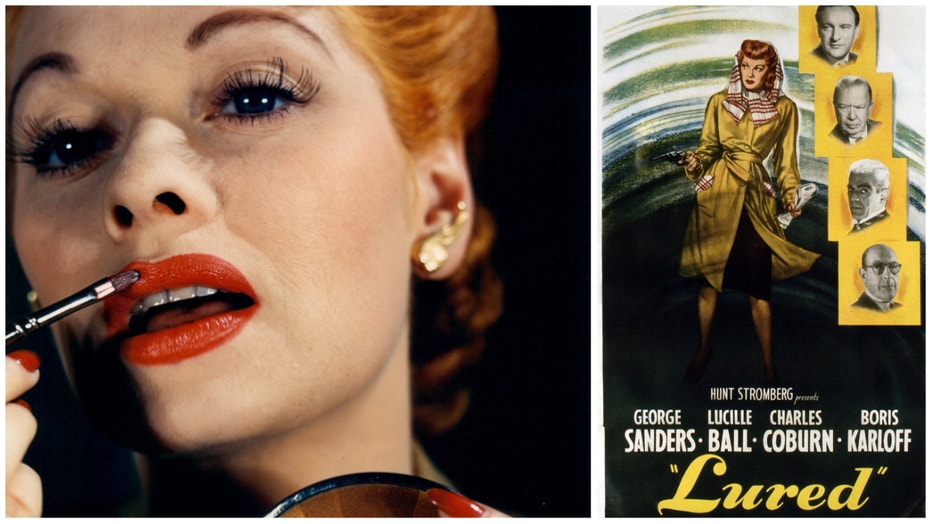 Lucille Ball paints her lips in a scene from the film 'Lured', 1947. (Photo by United Artists/Getty Images)

You can stream "Lured" — and more of Lucille’s Ball work — free on Tubi.

About the writer: Emma Fraser is a freelance culture writer with a focus on TV, movies and costume design. She has contributed to Elle, The Daily Beast, IGN, Vulture, The Cut, Thrillist, Little White Lies and more. Follow her on Twitter and Instagram: @frazbelina.