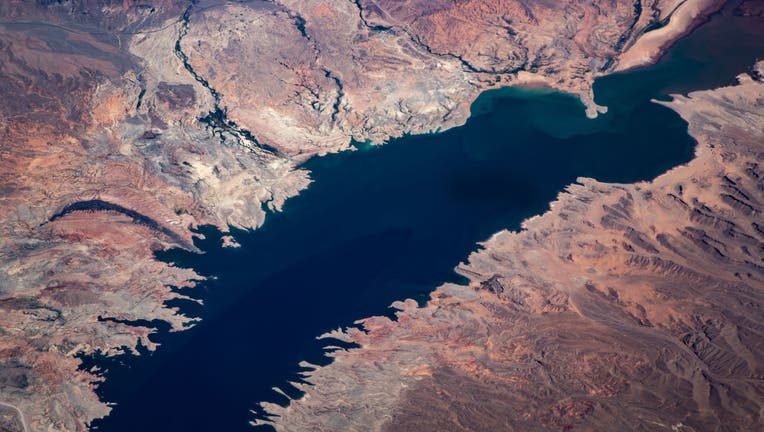 LAS VEGAS - Lake Mead, a drought-stricken Colorado River reservoir located outside of Las Vegas, has been under full capacity for decades — and once again has dropped to a new low since the 1930s.

The Colorado River pools behind Hoover Dam to create Lake Mead, the largest reservoir in the United States that was developed in 1936, according to the National Park Service.

Lake Mead, and another falling Colorado River reservoir called Lake Powell, are part of a system that provides water to more than 40 million people and businesses in Arizona, California, Colorado, Nevada, New Mexico, Utah, Wyoming, and across the southern border in Mexico.

The lake has made national headlines in recent months after the discovery of multiple bodies in the lake due to dropping water levels.

The water levels at Lake Mead, situated between Nevada and Arizona, have fluctuated over the years, according to the National Parks Service. But in recent years it has fallen steadily amid ongoing drought and increased water demand.

Some of the steepest cliffs bordering the lake show over 170 feet of white mineral "bathtub ring."

Skeletal remains have been found in a sunken barrel at Lake Mead as water levels drop to their lowest since 1937, FOX 5's Dani Masten reports. (Video via KVVU)

The bureau’s latest 24-month outlook released this month predicts that Lake Mead’s "most probable" water level will be 1014.86 feet by September 2023, which is nearly 9 feet lower than the forecast made last month.

If Lake Mead were to fall below its "dead pool" level of 895 feet, Hoover Dam would be unable to release water downriver to California, Arizona, and Mexico, according to the Las Vegas Review-Journal.

"We are 150 feet from 25 million Americans losing access to the Colorado River, and the rate of decline is accelerating," John Entsminger, general manager of the Southern Nevada Water Authority, said last week, according to the news outlet.

Touton added that the Colorado River is the largest and most urgent focus, the Las Vegas Review-Journal reported.

"There is so much to this that is unprecedented," Touton, a Nevada native, told lawmakers. "But unprecedented is now the reality and the normal in which Reclamation must manage our system, for warmer, drier weather is what we are facing."

In April, the Southern Nevada Water Authority announced that water levels at Lake Mead had fallen so low that Las Vegas is drawing water from deeper in the reservoir, from the so-called "third straw."

The pipeline near the bottom of the lake was completed in 2015 and built so that Las Vegas can still get water if the lake’s surface drops below two other intake pipes.

"Without the third intake, Southern Nevada would be shutting its doors," Pat Mulroy, former longtime chief of the Las Vegas-based water authority, who is now a consultant, told the Associated Press in April. "That’s pretty obvious since the first straw is out of the water."

RELATED: Tucson may forego some water to help keep Lake Mead level up

This story was reported from Cincinnati. The Associated Press reported.