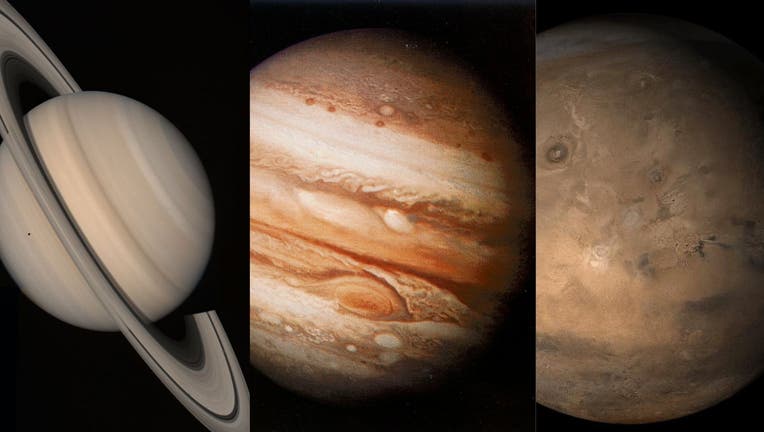 LOS ANGELES - Calling all stargazers. For the remainder of November, you will be able to see three planets shining brightly from Earth depending on where you live, according to EarthSky.org, a science and astronomy news website.

The three planets that will be most visible in the sky will be Mars, Jupiter and Saturn.

For the rest of the year, Jupiter and Saturn will be visible starting at mid-evening every night and will be best viewed in the Southern Hemisphere, but will sink a bit lower in the sky at sunset each day, and set sooner after dark.

Jupiter and Saturn will be the closest to one another than they have been since 1623, according to EarthSky.org. Throughout November, the two giants will inch closer and closer together until they have a “great conjunction” in December.

Both planets will be at their closest distance to one another on Dec. 21, 2020. The next conjunction between these planets won’t happen again until March 15, 2080.

“If you have a telescope, it’s best to use it when Jupiter and Saturn are highest up for the night at nightfall. These two worlds will descend westward as evening deepens, so catch them early. Typically, the view of Jupiter’s four major moons and Saturn’s glorious rings through the telescope is sharper when these worlds are higher up than lower down. The thickness of the Earth’s atmosphere near the horizon tends to blur the view of Jupiter’s moons and Saturn’s rings,” EarthSky.org stated.

Philpott captured time-lapse imagery on Oct. 31 which showed the full moon rising in the sky.

Earth’s neighbor, Mars, will also be shining brightly in the sky towards the end of November.

According to EarthSky.org, the red planet will be visible, aligning with Earth’s moon, on Nov. 24, 25 and 26, 2020. And no need for a telescope or binoculars because Mars will shine so brightly, it’ll be hard to miss.