Super Bowl LVI: Everything you need to know

LOS ANGELES - The Super Bowl is right around the corner, and chances are you’ll be grabbing some delicious bites for the big game.

According to a recent Instacart survey among over 2,000 U.S. adults, 70% of Americans planned to watch the event this year with football (65%) and snacks (60%) topping the list for what game day viewers favor the most during the festivities.

And, since food plays a major role in the fun, the food delivery service has revealed America’s top-scoring game day snacks.

It’s no surprise that chips dominate when it comes to game day snacking.

According to Instacart’s survey, a whopping 99% of Americans who plan to watch the big game eat chips while they are watching, while 1 in 3 customers reported making chip purchases leading up to last year’s event.

But which chips top the scoreboard?

According to chip preferences, survey participants largely favored classic chips such as tortilla chips (76%) and potato chips (70%) over bolder flavors such as nacho (44%), BBQ (43%) and hot and spicy (33%). 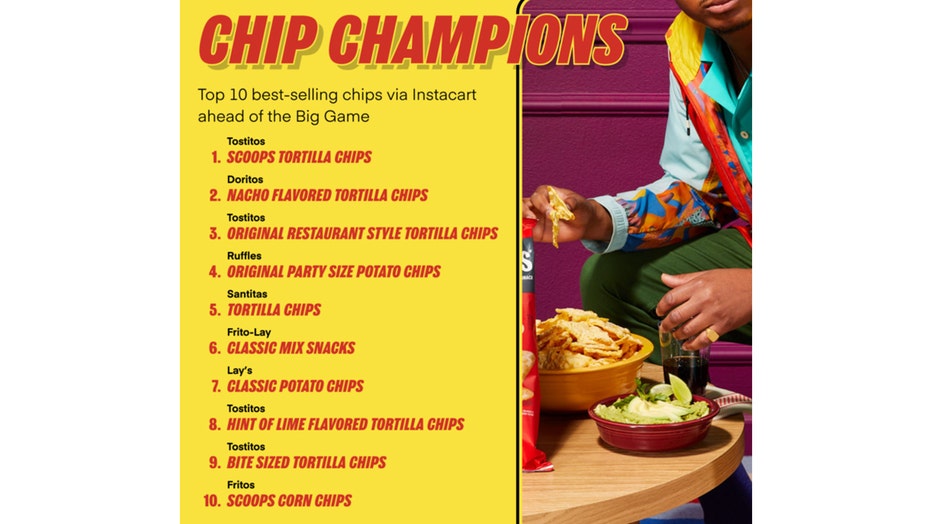 While classic chips top the leaderboard, one brand was the real MVP: Tostitos Scoops Tortilla Chips.

In fact, during the week leading up to the Big Game last year, Instacart sold 66,498 pounds of Tostitos Scoops Tortilla Chips.

"There’s a clear Big Game chip champion and it’s Tostitos Scoops Tortilla Chips," said Laurentia Romaniuk, Instacart’s trends expert. "These dip-worthy chips grow by more than 60% week over week leading up to the Big Game and are Instacart’s #1 selling chip during that time. It’s likely this chip takes the top spot for football watch parties because of its prime design for maximum dip scooping when you’re elbow to elbow with friends and family on a couch."

Salsa (64%), queso (50%), and guacamole (47%) topped the list of favorite dips or sauces to eat during the big game — making it even more evident why tortilla chips are so popular.

Chicken wings and football also proved to be a winning combination.

Last year, the number of orders containing chicken wings doubled on Instacart’s platform during the week leading up to game day with 1 in 25 customers purchasing chicken wings.

But, flats or drumsticks? Let's take a timeout to discuss!

More surprisingly, boneless wings weren’t as popular as one may think.

In fact, 65% of those who planned to watch Feb. 13’s game strongly or somewhat agreed that boneless chicken wings were just "glorified chicken nuggets." (I feel offended). 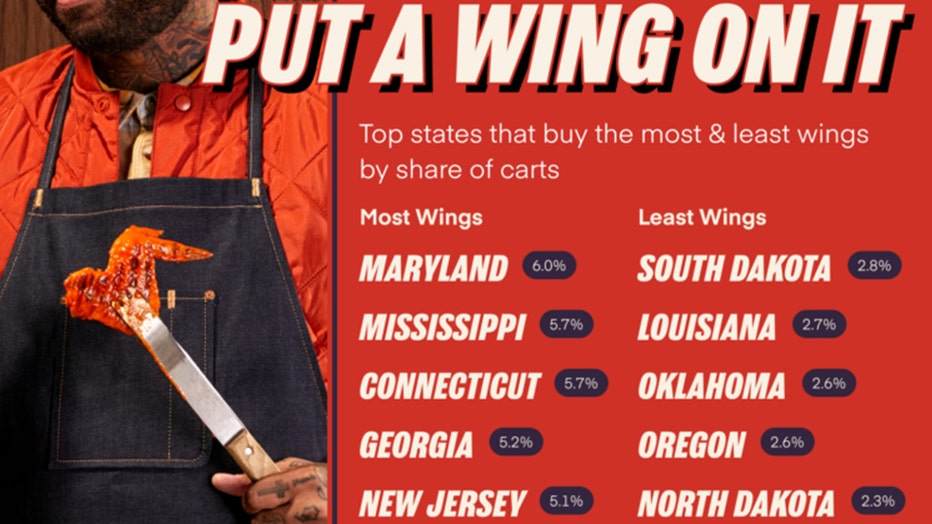 Top states that buy the most and least wings by share of carts (Credit: Instacart)

States which had a strong affinity toward the popular snack included Maryland, which came out on top, followed by Mississippi, Connecticut, Georgia and New Jersey.

In addition, when it came to the dips that wings and other snacks are dunked into, ranch dressing (51%) topped the list of sauces.

Much of the south and west said they would prefer ranch dressing (55% and 54% vs. 44%), while those in the northeast were more likely than any other region to say they would prefer to dip their wings in blue cheese dressing (44% vs. 35% in the south, 32% in the midwest and 31% in the west).

Cheer for the beer

While we’re not sure beer constitutes a "snack," alcoholic drinks were another popular addition to a Super Bowl party, according to Instacart.

Varying types of beer took 8 out of the top 10 spots, with hard seltzers and canned cocktails also breaking through.

In the week leading up to the big game, Instacart said it sells enough frozen pizza to create one massive pizza pie with a diameter the size of three football fields. 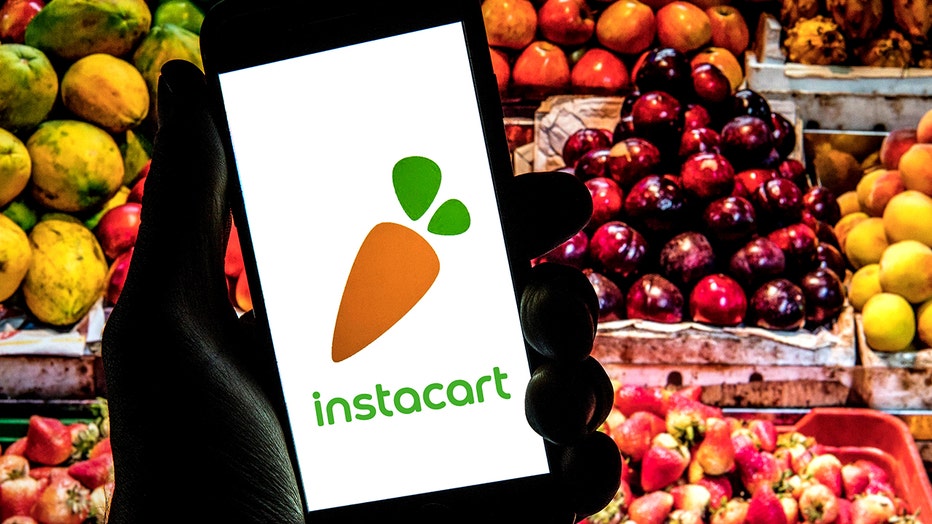 In this photo illustration a Instacart logo seen displayed on a smartphone with with fruits in a market in the background. (Photo Illustration by Thiago Prudencio/SOPA Images/LightRocket via Getty Images)

The "it’s not delivery" frozen pizza company said the contest centers on pie — both pizza and pi, the mathematical constant that is approximately equal to 3.14159.

If the score — at any point of the Super Bowl — is 3-14 (or 14-3), DiGiorno says it will give away free pizza to lucky fans who enter the contest online here. Individuals can enter between Feb. 6 and Feb. 13 for a chance to score the free pie.

Those who win will receive a coupon redeemable for free DiGiorno pizza.

Finally, don’t be offended veggie lovers, but it’s also worth mentioning, that your veggie tray may not cut it this year. The Super Bowl is a day for indulgence, which is perhaps why hummus (33%) topped the list of worst snacks among those who plan to watch the Big Game, followed by veggie trays at 23%.