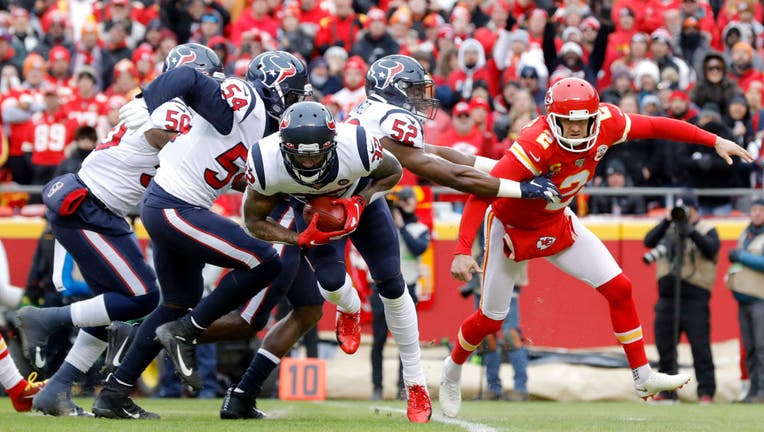 KANSAS CITY, MISSOURI - JANUARY 12: Lonnie Johnson Jr. #32 of the Houston Texans recovers the block kick of Dustin Colquitt #2 of the Kansas City Chiefs and returned for a touchdown in the first quarter of the AFC Divisional playoff game at Arrowhead

The Texans and Chiefs set a postseason record for combined points in the first half on Sunday when the Chiefs rallied from a 24-0 first-quarter deficit to take a 28-24 lead into the locker room. Texans went into the fourth quarter with a score of 31, trailing behind the Chiefs' score of 41.

The 52 points eclipsed the 49 set by the New Orleans Saints and Arizona Cardinals in the divisional round on Jan. 16, 2010. It fell just short of 56 points for any half, set by the Cardinals and Green Bay Packers in the wild-card round a week earlier.

The Texans missed a chance to make it 28-27 when Ka'imi Fairbairn missed a 51-yard field-goal attempt on the final play of the half.

The Chiefs fumbled a punt return, had their own punt blocked for a score and committed plenty more mistakes in becoming just the fourth home team in NFL history to trail 21-0 after the first quarter. But the Texans called a fake punt in the second quarter and were just as sloppy in allowing Kansas City to mount the biggest comeback in team history.

Kelce became the first pass-catcher with three touchdowns receiving in a single quarter in postseason history, while the tight end became one of 16 players with three TDs total. Nobody has had four TD catches in a playoff game.

The Chiefs had the ball a mere 4 minutes, 50 seconds in the second quarter. They needed just 16 plays to score four TDs.