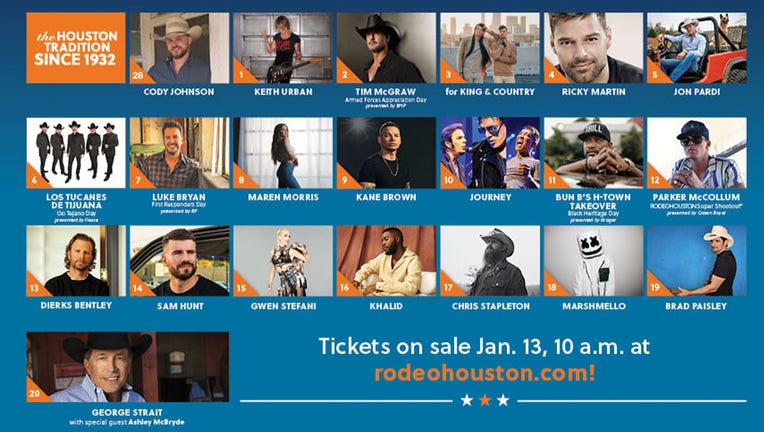 HOUSTON - The 2022 RODEOHOUSTON entertainer lineup has been revealed, and tickets go on sale this week.

Here's everything you need to know to get a seat at the show.

When do 2022 RODEOHOUSTON tickets go on sale?

Tickets for Cody Johnson and George Strait went on sale last year, but individual tickets for the remaining performers go on sale on January 13 at 10 a.m. The waiting room opens at 9:30 a.m.

Tickets will be available for purchase at rodeohouston.com.

Customers in the waiting room will be randomly selected to enter the store to purchase tickets at 10 a.m.

It is not a first-come, first-served line, and officials say a place in the waiting room does not guarantee tickets.

Once purchased, tickets can be accessed by logging into the AXS mobile app with the email used to purchase the tickets. Tickets are delivered electronically and may take 48 hours.

How much are 2022 RODEOHOUSTON tickets?

Individual tickets start at $20, plus a $4 per ticket convenience fee, for the upper level, and they go up to $350 for Hess Chute seats.

Click here for a seating map of NRG Stadium.

Who is performing at RODEOHOUSTON in 2022?