HOUSTON - A man behind a gruesome crime spree back in 2020 that left three dead has been sentenced to life in prison.

According to the Harris County District Attorney's Office, Joshua Kelsey, 37, was convicted Thursday for shooting Louis Hodges around 8:15 p.m. in May 2020.

Hodges and another man, who the DA's office said knew Kelsey picked him up to help them buy drugs. They reportedly drove Kelsey to a home in southwest Houston, gave him $40 to buy heroin, and returned 20 minutes later without drugs or money.

A witness reports that Kelsey seemed "high," the DA's office stated in a press release.

Hodges and the other man then drove Kelsey about half a block and stopped in a parking lot in the 14200 block of Bridgeport before the 37-year-old made them stop. From there, he pulled out a pink pistol and threatened the two men, who got out of the car and tried to run away.

He fired at least eight rounds, hitting Hodges and another man three times as he ran away. Court records say Kelsey then stood above Hodges and shot him in the chest before running into a nearby home. 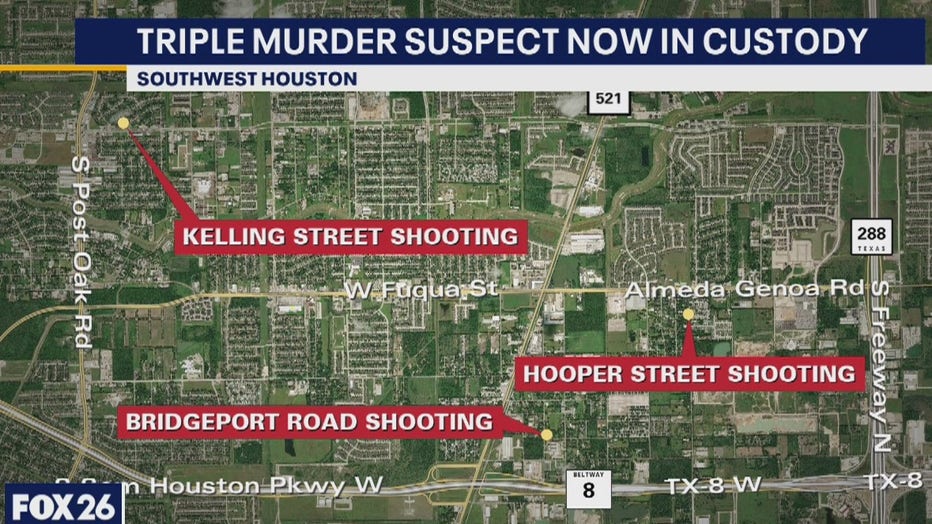 Homeowners called the Houston Police Department and a witness said Kelsey had been upset with Hodges for an incident the day before, where Hodges was "apparently careless with a small bag of heroin."

"It is heartbreaking that a madman with a gun and a stolen car can kill three people and absolutely devastate their families in a matter of minutes," Harris Co. DA Kim Ogg said in a press statement. "Life in prison is absolutely the right result."

Kelsey then reportedly took the stolen car to a home in the 5200 block of Kelling St. belonging to his friend, Michael Miller. According to Miller's longtime partner, via the DA's office, Kelsey had stored an RV in 2016 at Miller's home but he "seemed to have abandoned the RV and could not be reached for six months, so Miller had it hauled away."

When Kelsey arrived at Miller's home, he shot him to death as soon as he answered the door. Miller's partner suspects Kelsey's motive is because he blamed Miller for getting rid of the RV, "which, Kelsey believed, led him to become homeless."

Court documents say Kelsey then went to another home in the 13500 block of Hooper Rd, where "an old acquaintance" named Juan Garcia lived. When he answered the door, two witnesses inside the home testified that Kelsey said, "I've got something for you," before shooting him to death.

Kelsey drove off, once again, in the stolen car and about seven hours and a 20-mile police chase later ending in Sugar Land, he was arrested.

"This is a guy who has never accepted any responsibility for his actions, and he made a plan to kill people who he held grudges against," said Assistant District Attorney Sean Teare, who prosecuted the case with ADA David Brucker. "He had deep-seated anger and hatred for these people. He has to be locked away for as long as possible because who knows who else he may have grudges against."

A Harris County jury found the 37-year-old guilty of all three murders Thursday, and he was sentenced to life in prison.