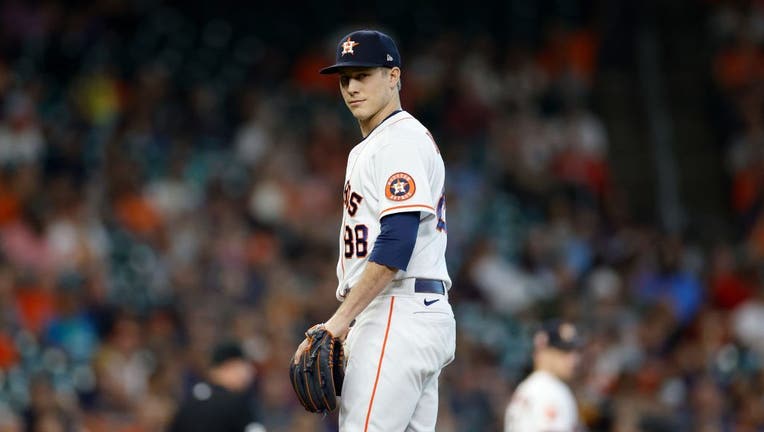 HOUSTON, TEXAS - OCTOBER 05: Phil Maton #88 of the Houston Astros smirks as he looks at Nick Maton #29 of the Philadelphia Phillies after a single in the eighth inning at Minute Maid Park on October 05, 2022 in Houston, Texas. (Photo by Tim Warner/Ge

Astros reliever Phil Maton revealed Tuesday that he broke his right pinkie when he punched a locker in frustration after Houston’s regular-season finale and will miss the postseason.

Maton had surgery Monday to repair the fractured finger on his pitching hand.

The Astros announced earlier Tuesday that Maton and another veteran reliever, Will Smith, had been left off the roster for the AL Division Series against Seattle.

The 29-year-old Maton gave up two hits, including a single to younger brother Nick Maton, and two runs while recording one out in the eighth inning of Houston’s 3-2 win over Philadelphia last Wednesday.

"I was upset with how my outing went, and it’s kind of shortsighted and ultimately selfish and it’s one of those things that I hope doesn’t affect our team moving forward," Maton said Tuesday.

Smith, who was acquired from the Braves at the trade deadline, had a 3.27 ERA in 24 appearances for Houston this season. Maton had a 3.84 ERA in 67 games.

The Houston Astros will host the Seattle Mariners at Minute Maid Park for Games 1 and 2 of the American League Division Series. The roof will be closed for both games.

The Mariners went with the same roster they used for the wild-card series. They will carry 12 pitchers, three catchers, five infielders, four outfielders and utility players Adam Frazier and Dylan Moore.