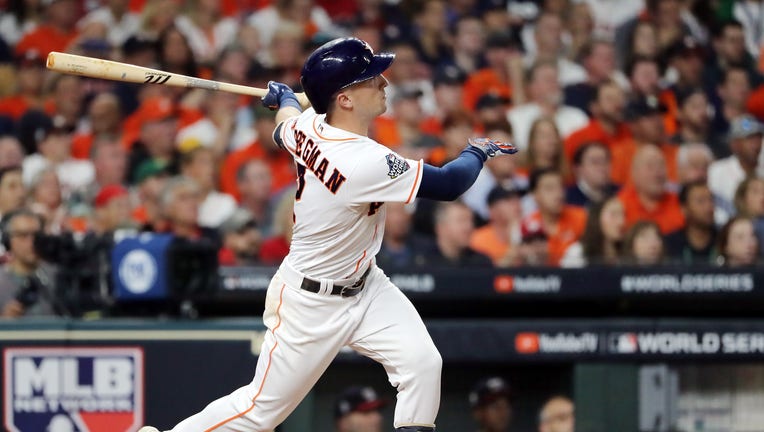 HOUSTON, TEXAS - OCTOBER 23: Alex Bregman #2 of the Houston Astros hits a two-run home run against the Washington Nationals during the first inning in Game Two of the 2019 World Series at Minute Maid Park on October 23, 2019 in Houston, Texas. (Photo

HOUSTON - The Nationals won Game 2 of the World Series with a final score of 12-3.

A home run by Martín Maldonado in the ninth wasn't enough to get the Astros back on track.

Adam Eaton pulled a deep two-run homer down the right field line in the eighth inning, and Asdrúbal Cabrera had an RBI single as the Nationals stretched their lead to 11-2 going into the ninth.

Unless there is a huge comeback for the Astros in the ninth, the Nationals will become the 56th team to win the first two games in a World Series. The last 11 teams to do that have gone on to win the title, including Boston last season - and 44 of 55 overall (80 have gone on to be champions.

The Nationals entered the game on their best 19-game stretch in team history, going 17-2 since Sept. 23.

Things only got worse for the Astros after Justin Verlander left.

Verlander gave up Kurt Suzuki's tiebreaking homer to lead off the seventh and was done after walking Victor Robles.

In came reliever Ryan Pressly, whose right knee has been giving him trouble for months. What followed was a messy display of baseball, perhaps the poorest of the season for the Astros, and at the worst time.

Washington wound up scoring six times in all and taking an 8-2 lead, helped by a grounder that Alex Bregman couldn't handle cleanly and another ball the All-Star third baseman threw away.

One other notable thing: The Astros issued their first intentional walk of the year. Manager AJ Hinch went the whole season without calling for one but put rookie Juan Soto on with two outs and runners on second and third.

It was 3-2 at that point. Soon, the Nationals were up by six and fans were starting to file out of the stadium.

Justin Verlander is done two batters into the seventh inning, and the Houston Astros ace won't get his first World Series victory.

The right-hander departed Game 2 with the Astros down 3-2 to the Nationals, who are looking to take a 2-0 series lead.

Manager AJ Hinch made the pitching change after Kurt Suzuki opened the seventh with a tiebreaking homer and Verlander then walked No. 9 hitter Victor Robles.

Verlander entered the game 0-4 with a 5.67 ERA in his first five World Series starts, with Houston and Detroit.

Kurt Suzuki homered in the top of the seventh to give the Nationals a 3-2 lead Wednesday night in Game 2.

The Astros had threatened against Washington's Stephen Strasburg in the sixth when Yuli Gurriel doubled with one out and Yordan Álvarez took two balls, then was intentionally walked.

Carlos Correa hit a humpback liner to second, dropping to 8 for 49 in the postseason. Kyle Tucker pinch hit for Robinson Chirinos and got ahead 2-0 before Strasburg went to his third full count of the inning and threw a curveball that Tucker took for strike three.

Strasburg allowed seven hits, striking out seven and walking one. He threw 114 pitches.

Justin Verlander had worked his first 1-2-3 inning in the top half, retiring Howie Kendrick on a flyout, striking out Asdrúbal Cabrera and getting Ryan Zimmerman on a groundout.

Game 2 of the World Series remains tied at 2-2 after five innings - like it has been since both teams scored in the first.

Even while getting runners on base every inning, the Nationals have gotten only one of them past first off Justin Verlander since Anthony Rendon, the third batter of the game, had a two-run double.

After Trea Turner had a leadoff single in the Washington fifth, Adam Eaton grounded into a double play. Shortstop Carlos Correa fielded the hard grounder right near second, stepped on the bag and threw to first.

Verlander has thrown 56 of his 83 pitches for strikes. His five strikeouts have pushed his postseason career total to an MLB-record 201, and he has walked two.

Washington starter Stephen Strasburg has six strikeouts without a walk. He has allowed only three more hits since Houston had three consecutive one-out hits in the first. He has thrown 56 of 86 pitches for strikes.

Justin Verlander and Stephen Strasburg both have settled in nicely through four innings. They haven't given up a lot since each gave up two runs in the first.

Aiming for his first World Series win, Verlander at least ensured his place on future blooper reels. Rushing to field Ryan Zimmerman's tapper toward the third base side, he slipped - he tried to make a throw, but it hit his left leg and harmlessly bounced away, giving Zimmerman an infield single.

The veteran pros each smiled. Even in a tense matchup, it's still a kid's game.

Houston threatened in the third inning, putting runners at the corners. Shortstop Trea Turner bobbled and then bounced his throw to first for an error on José Altuve's two-out grounder and Michael Brantley singled to right.

Alex Bregman grounded to shortstop on the next play for a forceout.

Washington's Stephen Strasburg gave up four hits in the first three innings, striking out four and walking none. He threw 58 pitches.

Houston's Justin Verlander was at 51 pitches through three innings. He allowed four hits and one walk with four strikeouts.

Washington's Juan Soto, playing his last game as a 20-year-old, doubled with two outs in the third for the Nationals' fourth hit. Soto was stranded when Howie Kendrick popped out, dropping the Nationals to 1 for 5 with runners in scoring position.

Justin Verlander has become the first pitcher with 200 career strikeouts in the postseason.

The Houston Astros starter has four strikeouts through the first two innings against the Nationals, and the game is tied at 2-2.

After the first three Nationals in the game reached base, and two of them scored, Verlander struck out four of the next six.

John Smoltz, the big right-hander who was working the game on the Fox television broadcast, had been the postseason leader with 199 strikeouts.

Mike Trout of the Los Angeles Angels and Christian Yelich of the Milwaukee Brewers are both second-time winners of the Hank Aaron Awards that recognize the most outstanding offensive performer in each league.

Yelich took home the National League honor for the second year in a row. Trout also won the American League's award in 2014.

The awards were established in 1999 to honor the 25th anniversary of Aaron breaking Babe Ruth's all-time home run record. The latest winners were announced before Game 2 of the World Series.

Trout this season led the majors with a .483 on-base percentage, and led the AL with a .645 slugging percentage while hitting a career-best 45 home runs.

Yelich's .671 slugging percentage topped the majors, and he led the NL with his .329 batting average. His 44 homers were a career high and he scored at least 100 runs for the third season in a row.

Baseball Commissioner Rob Manfred discounts the drop in home runs during the postseason and expects to receive a new report from scientists on baseballs by the end of the year.

The average of 2.79 homers per game has dropped to 2.29 in the postseason, with 71 long balls in 31 games entering Wednesday.

Game 2 is off to a flying start.

Anthony Rendon got things going, putting the Nationals ahead with a two-run double high off the left field wall against Justin Verlander.

Alex Bregman then tied it in the bottom of the first inning, hitting a ball even higher and farther to left. The two-run homer off Stephen Strasburg made it 2-all.

So much for an ace pitching duel, so far.