A Harris County deputy was in pursuit of a suspect when the patrol car crashed with another vehicle in northeast Houston, authorities say. A woman died, and two children and the deputy were taken to the hospital.

HOUSTON - A woman died and several other people, including two children and a Harris County deputy, were taken to the hospital following a crash during a pursuit in northeast Houston, authorities say.

According to Sheriff Ed Gonzalez, a Harris County Sheriff’s Office deputy was in pursuit of a possible robbery suspect when the deputy was involved in a crash in the intersection.

According to Houston police, the deputy’s vehicle and SUV vehicle collided in the intersection. After the initial collision, police say other vehicles were also struck – a total of seven vehicles involved in the crash.

Police say the SUV rolled over and struck two other vehicles, and the deputy's vehicle went into a nearby parking lot and struck several vehicles there.

After the initial collision between an HCSO patrol car and another vehicle, several other vehicles were also struck, authorities say. A woman died, and others – including two children and the deputy – were taken to the hospital.

The woman driving the SUV was pronounced dead at the scene. Two other children, believed to be 2 and 5 years old, were transported to the hospital. One child is in critical condition and the other child is in stable condition.

"On behalf of the Harris County Sheriff's Office, I want to extend our condolences to the family of the deceased female, and we're also praying for the full recovery of the two children that have been injured in this crash," Sheriff Gonzalez said. "As was mentioned, our deputy is said to be in stable condition, and we also pray that he makes a full recovery." 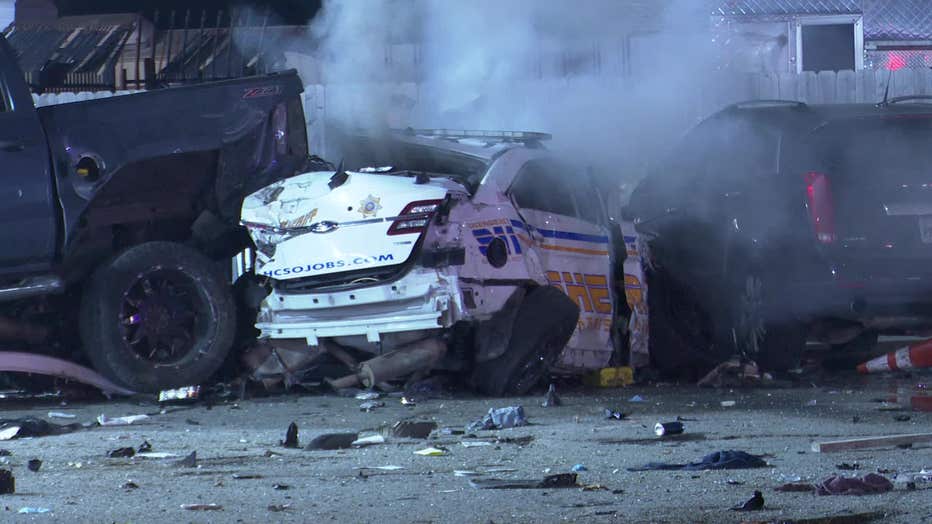 Several agencies investigate a deadly crash at the intersection of Laura Koppe Road and Lockwood Drive.

Sheriff Gonzalez said the initial suspect that was being pursued fled the scene.

The crash is under investigation by the Houston Police Department’s Vehicular Crimes Division, the Harris County Sheriff’s Office, and the District Attorney’s Office.