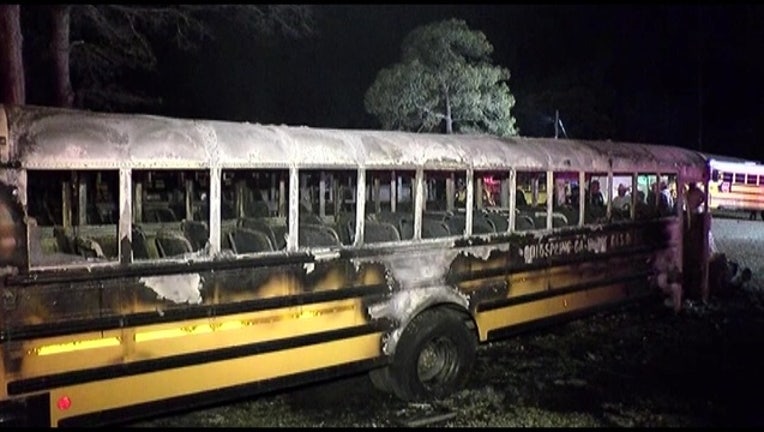 Fire marshal's office investigators were seen looking over the charred remains of the school buses on Thursday as they tried to determine what caused the fire at around 10 p.m. on Wednesday. State fire marshal's office District 3 investigator Todd Johse tells FOX 26 News that the fire started in the engine compartment in one of the buses as the result of an electrical problem and then spread to the other buses parked nearby.

“The first boom was about 9:50," said Barbara McGee, who lives in a wooded area near the bus barn and was startled by the sound of explosions. "I was working on the computer.” She told FOX 26  that the first boom was followed by what sounded like four gunshots.

“There were at least I think four more explosions, but all it did was shake my house,” added McGee, who contacted the sheriff’s office and prepared for the worst.

Deputies and firefighters were called at around 10:15 p.m., according to the superintendent. The flames were put out within a half hour, leaving the five buses burned.

"We don’t expect there to be any foul play,” said superintendent Dr. Leland Moore. He said the sounds of explosions or gunfire that neighbors initially heard are believed to have been tires popping or aerosol cans exploding in the heat of the flames.

“We think it was a electrical fire where...one bus catching up, then the others caught up after that,” said Moore.

While the buses were insured, the superintendent says replacing them will take a toll on the school district’s finances.

“It’s always a financial challenge," said Moore. "When you insure these buses, you insure them for the replacement value. Some of these buses are 12 to 14 years old. Insurance is not gonna pay what a brand new bus on today’s market.”

The superintendent said following this week’s spring break, school will resume as normal on Monday, despite the loss of five out of 25 of the bus inventory. He also said the district will lease buses or borrow from another district until they can get replacements, which could take one to two months.

“It’s gonna be hard on the school district," said McGee. "You know we’re a small poor county, so anybody that can help, we need help.”