UK family's cat believed to have been cremated returns home

A family was stunned when their beloved cat, Frankie, thought to have died and been cremated, reappeared at their door.

WARRINGTON, England - A family in England was "shocked" to discover that their missing cat, thought to have died and been cremated, suddenly reappeared at their backdoor weeks later.

Frankie, a fluffy tabby cat believe to be about 16 years old, went missing on May 19 from the family’s home in Warrington, England — a town located between Liverpool and Manchester.

The cat’s owner, Rachel Fitzsimons, said Frankie was a rescue cat who they adopted 14 years ago. She described him as a "real hunter" who goes out and often brings "gifts" back to the family — but is never gone for long and sleeps with their 7-year-old son every night.

But on that Wednesday evening, Frankie went out around 7 p.m. and didn’t come home.

"We weren’t really concerned the first night, but by Friday we were really worried because the weather took a turn for the worst," Fitzsimons recalled. "The weather was really wet and it was cold, so we knew that if he could come home, he would come home." 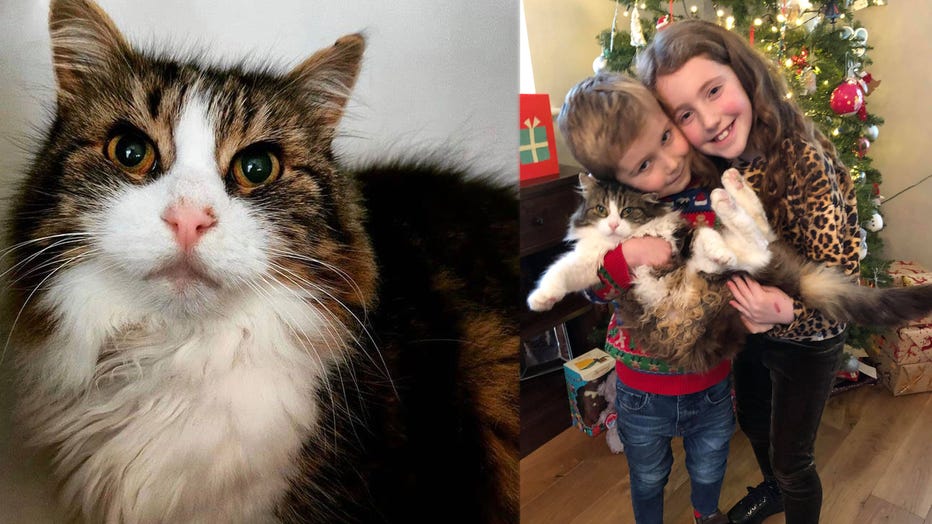 Their son, Remy, cried every night his cat remained missing. And by Saturday, Fitzsimons said she spotted the body of a cat on the side of the motorway near their home — fearing the worst.

She and her husband drove up and down the roadway multiple times to try and discern if the animal was, in fact, their beloved cat. Fitzsimons said her husband even parked and walked along the side of the road to take a picture and try and get a closer look of confirmation.

The cat found dead on the roadway had been badly injured but Fitzsimons said you could still see the fur and tail — which looked strikingly similar to Frankie.

"It just looked exactly like Frankie, so we were convinced it was him," she said.

The family called staff with Highways England, a government-owned agency that operates and maintains England’s motorways, who picked up the animal’s body. The staff even called the family to confirm the markings — which further convinced them of Frankie’s fate.

"We went and collected Frankie’s body on that Monday lunchtime absolutely in tears, crying, heartbroken. And we took him to the vet and asked them to cremate him for us," Fitzsimons said.

The family had the cat’s ashes placed in a box with his name "Frankie" written on a plaque, sitting in their son’s bedroom in memory, and framed some pictures of the feline throughout the years. They had also kept Frankie’s bed and food in the weeks after, unable to immediately get rid of the animal’s items in the midst of their grief.

On June 10, just over three weeks after the date he went missing, Fitzsimons’ husband started hearing a cat outside.

"(My husband) came running past me to the backdoor," she said. "He was just shouting outside, ‘Come out! Come out quick! Come out!’ So my son and myself went running outside and he’s holding Frankie up in the air and there he was."

Sure enough, Frankie had returned home — albeit a more frail, thin version of himself. The family, who was "absolutely shocked," gave him food and had him checked at the vet.

At an estimated 16-years-old, Frankie has already surpassed the average lifespan of both outdoor and indoor cats, according to UC Davis Veterinary Medicine. The family said before Frankie had returned home, they felt comfort in the fact that they were able to spend so many years with him.

"We’ve been really lucky to have had him for so long. We were grateful for that really, it was just so sad and tragic that we thought he’d died as he had done and not with us as home," Fitzsimons said. "So that was why we had him cremated really. We just felt that it was the nicest thing we could do for him and for Remy, really."

Frankie has since been checked multiple times by the vet. He has an abscess in his mouth and may have suffered some head trauma, but otherwise is recovering and eating more — now back in the comfort of his loving family.