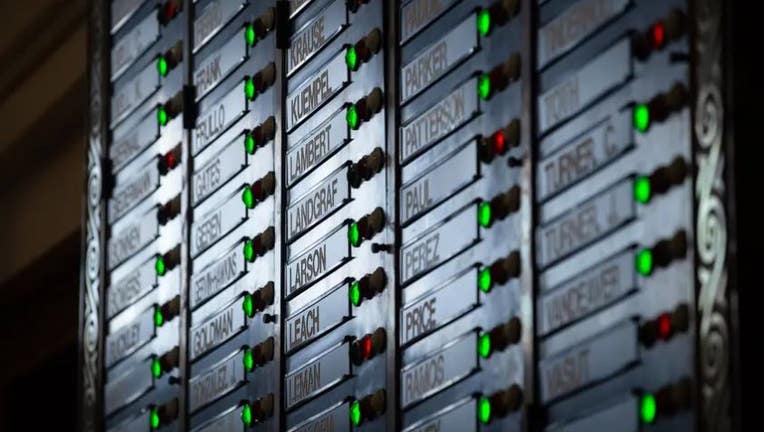 Lights indicate votes for various state Representatives on the House floor at the state Capitol on May 28, 2021 Credit: Evan L'Roy/The Texas Tribune

AUSTIN, Texas - Outnumbered and virtually powerless to block conservative priorities they oppose, Democrats in the Texas Legislature say they are keeping their options open as they prepare for a special session that is expected to revive the GOP elections bill they killed last month.

The line coming from Democrats across the spectrum: "Everything is on the table." That includes another walkout like the one that doomed Senate Bill 7 in the final hours of the regular legislative session when Democrats broke quorum. But this time, such a move could now imperil the pay of their staffers, since Gov. Greg Abbott vetoed the funding for the legislative branch while telling lawmakers they could restore it in the special session that starts in less than a week.

"From a caucus perspective, since we’re going into the unknown, we have to keep every option open, which includes denying quorum," said Rep. Jessica González of Dallas, vice chair of the House Elections Committee. "I think a lot of folks want to see what would be in [the elections bill] before making a decision."

She said House Democrats are "trying to get a sense of where the majority of our caucus is," but that consensus is "to be determined." Similarly, Rep. Nicole Collier of Fort Worth said during a Texas Tribune event Tuesday that "right now, there has not been any type of resolution or concerted efforts."

"Everything is on the table," Collier said. "We’re not going to remove any options at this point."

There are still a number of unknowns before Democrats can settle on a strategy, including what the full agenda will be for the special session, how Abbott will structure it and what the elections bill will look like. Abbott announced June 22 that the special session will begin July 8 but offered no other details, only saying the agenda would be announced before the session starts.

Democrats will also have to consider Abbott’s veto of funding for the Legislature for the two-year budget cycle starting Sept. 1. That gives lawmakers an incentive to participate in the special session — or potentially sacrifice their staffers’ pay. Abbott’s veto was in retribution for the Democrats’ walk out, but it affects more than 2,100 legislative staffers and individuals working at legislative agencies. (Abbott has acknowledged the lawmakers’ salaries are protected by the state Constitution.)

Last week, Democrats and staffers sued over Abbott’s veto, asking the state Supreme Court to reverse it. Abbott’s office faces a Monday deadline to respond to the lawsuit.

The elections bill is unlikely to be the only proposal that Democrats will have to strategize against in the special session. In addition to vowing to bring back the voting legislation, Abbott has also said he would resurrect Republican priority proposals to crack down on "critical race theory" in Texas classrooms and punish social media companies for allegedly censoring Texans for their political views.

House Democrats sought to regroup for the coming battles during a meeting Monday at the Hotel Van Zandt in Austin. Roughly half of the 67-member caucus attended, according to three people who were present.

The head of the caucus, Rep. Chris Turner of Grand Prairie, said members "had a productive meeting, discussing our litigation challenging Gov. Abbott’s unconstitutional veto of the Legislature, as well as the upcoming special session."

"House Democrats are united and prepared to fight for all Texans, especially when it comes to defending the sacred right to vote," Turner said in a statement.

SB 7, the bill that Democrats derailed in the regular session, would have put new limits on early voting hours, local voting options and mail ballots. Critics of the bill have called it an attempt at voter suppression that disproportionately affects Texans of color.

Whatever Democrats decide to do, it could only cause another temporary delay in consideration of the election bill given that they remain in the minority at the Legislature and only one Republican — Rep. Lyle Larson of San Antonio — has shown interest in splitting with his party.

Abbott’s veto only further backed them into a corner.

Rep. Armando "Mando" Martinez of Weslaco, one of the Democrats who walked out, said in an interview Wednesday that Abbott’s veto was "extremely juvenile" but that the potential loss of staff pay was "absolutely" weighing on him as July 8 nears. Still, he expressed optimism that Democrats would be able to navigate the conundrum.

"I think Democrats have always been resilient in the way that we use the rules to our benefit," Martinez said, adding that he was "very confident" that Democrats would ultimately coalesce around a strategy.

The special session also presents potentially tough choices for some Republicans, namely House Speaker Dade Phelan. After the walkout, he drew the wrath of Lt. Gov. Dan Patrick, who charged Phelan with mismanaging the House calendar and allowing Democrats the opportunity to break quorum. Phelan has denied that.

At the same time, Phelan has said he will not resort to the most drastic of measures — locking the chambers doors and dispatching state police — if Democrats seek to abandon the chamber again. His office is nonetheless emphasizing its commitment to finishing the job on the voting legislation.

"If it takes a hundred special sessions, the Texas Legislature will pass an election integrity bill that instills further confidence in the accuracy of our elections," Phelan spokesperson Enrique Marquez said in a statement for this story.

Both Texas Republicans and Democrats will have to deal with more national attention than they did during the regular session. That is particularly true as voting rights battles shift even more to the states after Republicans in the U.S. Senate blocked Democrats’ far-ranging elections overhaul last week. Democratic state lawmakers in Texas had tried to leverage their walkout to force a breakthrough on the federal legislation, known as the For the People Act.

Among Democrats organizing outside the Texas Capitol, there has been virtually unanimous deference to lawmakers in the special session beyond voicing support for their everything-on-the-table approach. Beto O’Rourke, who spent weeks touring the state about voting rights after the walkout, said during a recent interview that Democratic legislators "have done so much so far, and I’m confident they’re gonna do whatever it takes in any special session."

One question for Democrats is how much they should work with Republicans on the elections legislation, especially after they were largely cut out of negotiations over the final version of SB 7 at the end of the regular session. Those talks produced a bill that GOP negotiators later admitted was flawed, saying they made mistakes with regard to the early voting window for Sundays and a process for overturning elections.

"Building that trust back would be a hard thing," Smith said, adding that he thinks Democrats "will talk [with Republicans], but I think we’ll be very weary of what they’re saying."

To be clear, House Democrats were not unanimous in their decision to break quorum over SB 7, and several appeared to stay behind, including a group of border-area representatives.

One of them, Rep. Eddie Morales of Eagle Pass, said in a text message Tuesday that he "supported and will continue to support" fellow Democrats who walked out, but in his case, he felt it was best to remain on the floor with other Democrats from the border region and argue against the bill in person.

"As far as this special session goes," Morales said, "I need to visit with the rest of my colleagues and leadership to see what strategies we plan on using."

Disclosure: Progress Texas has been a financial supporter of The Texas Tribune, a nonprofit, nonpartisan news organization that is funded in part by donations from members, foundations and corporate sponsors. Financial supporters play no role in the Tribune's journalism. Find a complete list of them here.