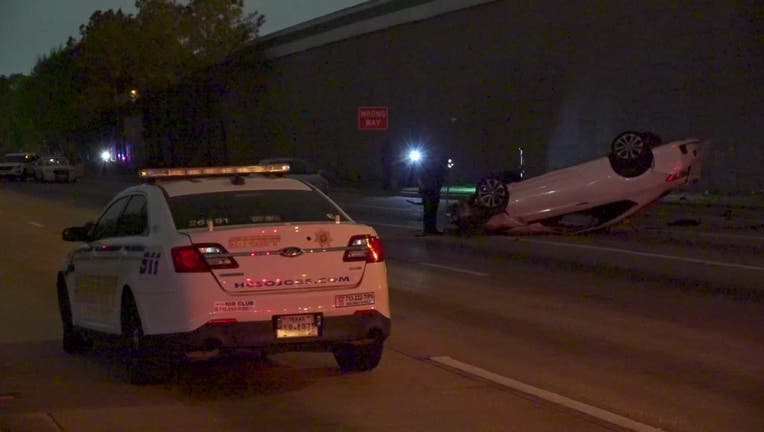 The Harris County Sheriff's Office investigates a deadly crash on the I-45 North Freeway service road.

A driver died after he was ejected from his vehicle during a rollover crash in north Harris County, the sheriff’s office says.

The two-car crash occurred shortly after midnight Friday on the North Freeway service road, approaching the intersection of Rankin Road.

Authorities say a gray Toyota was in a northbound left-turn lane, and a white Honda Accord was traveling behind it.

According to HCSO, the driver of the Honda struck the back left of the Toyota. After the impact, the Honda rolled over multiple times and came to a stop upside down.

The sheriff’s office says the driver of the Honda was not secured in a seatbelt, and he was ejected from the vehicle as it rolled over.

The Honda driver was taken to the hospital, where he was pronounced dead, authorities say.

According to HCSO, the driver of the Toyota exhibited clues of being intoxicated and was arrested for DWI. However, investigators say he was not the at-fault driver in the crash.

The crash remains under investigation by the Harris County Sheriff’s Office.